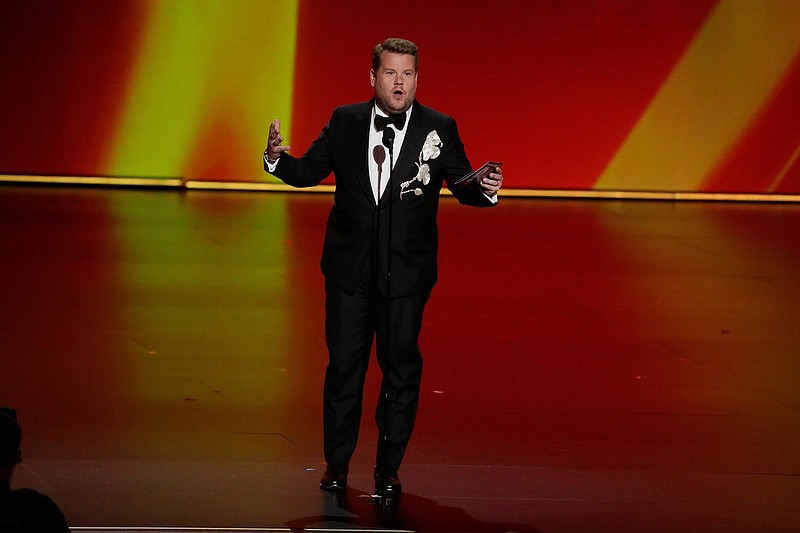 James Corden has come under fire for a segment on his show called “Spill Your Guts or Fill Your Gut.” (Los Angeles Times/TNS/Robert Gauthier)

That's the question now for thousands of online critics and late-night host James Corden. The concern is his occasional segment "Spill Your Guts or Fill Your Guts," which has been called racist for its use of some traditional Asian foods in its recurring hit parade of edibles.

Kim Saira, a Filipina Chinese social-media influencer, started a Change.org petition against the segment June 8, a day after posting a TikTok video that went viral. By the time she organized an in-person protest in L.A. on June 24, more than 40,000 people had signed the petition.

In an Instagram post Friday, Saira said the 60-person protest was "SO much fun," but noted that she hadn't gotten a response from CBS or Corden.

In "Spill Your Guts or Fill Your Guts," Corden asks celebrity guests challenging questions while offering them unusual and sometimes outrageous foods as an option if they decline to answer. The host accepts the same challenge.

While the goal would be getting the dishiest revelation, the laughs generally come from the foods themselves and the reactions to them.

Saira's petition called on Corden to change the game or cease it altogether. It asked that he issue a public apology and make a donation to support Asian-owned businesses. It also linked Corden's segment to current incidents of anti-Asian violence, saying, "Content like this continually perpetuates and encourages harm and racism against Asian Americans in our daily lives."

However, it turns out the protest was already successful in one of its goals more than a week before it was held.

Corden told Howard Stern in a June 16 interview that he had heard of the complaints and, in the future, would not use any of the foods in question. In other words, he would change the show.

"The next time we do that bit we absolutely won't involve or use any of those foods," the host told Stern. "Our show is a show about joy and light and love, and we don't want to make the show to upset anybody. Look, in the same way that when we played it with Anna Wintour, we gave her a pizza covered in cheeseburgers, you know what I mean? We completely understand."

Corden put off Stern's questions about whether people had gotten too sensitive. "It's not for us to determine whether somebody's upset or hurt about something," he said. "That's not for us to decide. All we can do is go, all right, we get it, we hear you, we won't do that."

Corden also said that as a matter of policy, he didn't read much or engage with anyone on social media regarding his show.

"[T]his statement is a nonapology, as he does not actually address that the cultural insensitivities of having the food on his show, and the harm that this perpetuates on Asians who still eat these foods," the petition said in an update last Thursday, the day of the protest. "This means we must keep going until the Late Late Show releases a public apology on air!"

She said that an attempt to deliver a thumb drive containing the names of the signatories to CBS Television was unsuccessful. "We were immediately denied by a bunch of men in suits at the gate," she wrote on Instagram. "I will post a video about this later!"

When reached Monday, representatives for CBS and "The Late Late Show" pointed The Times to the Stern interview.

Saira recently told the "Today" show that she stopped watching Corden last year after seeing the segment ridicule balut, a "sentimental food" she eats with her family on trips to the Philippines. The Filipino snack is a fertilized duck egg that's incubated for a few weeks and then hard-boiled.

"I noticed that he was presenting it to a guest and calling it gross," Saira said. "I was just so confused, and I feel like it was a moment of me just being like, 'Oh my gosh, like, this is my culture. I don't understand why he's making fun of it?'"

Before creating the petition, Saira put out a TikTok video that went viral after she was reminded of a 2016 "Late Late Show" segment in which Corden challenged fellow late-night host Jimmy Kimmel with balut, chicken feet, pig blood curds, jellyfish, ghost pepper hot sauce, bull penis, a thousand-year-old egg and a fish smoothie.

"I don't really know what that is," Corden said of the balut.

"Oh, it all looks so terrible," a smiling Kimmel replied. "And I know people [watching] can't smell it, but it doesn't smell good either."

Kimmel prematurely scarfed one of the pig blood curds, then drank the hot sauce rather than reveal the identity of his least-favorite late-night host. He challenged Corden with the balut, asking if the "Cats" movie veteran was as miserable as he seemed during his "Carpool Karaoke" segment with Britney Spears.

"I'm very sad it looked like that," Corden said, insisting the question wasn't the reason he was sweating. "I wasn't miserable at all."

Kimmel wound up eating all the bull penis and took a bite of the thousand-year-old egg, a Chinese dish. The latter made him grimace. Corden answered his way out of eating the chicken feet, but slugged down some fish smoothie after he couldn't name two cameramen on his crew that night.