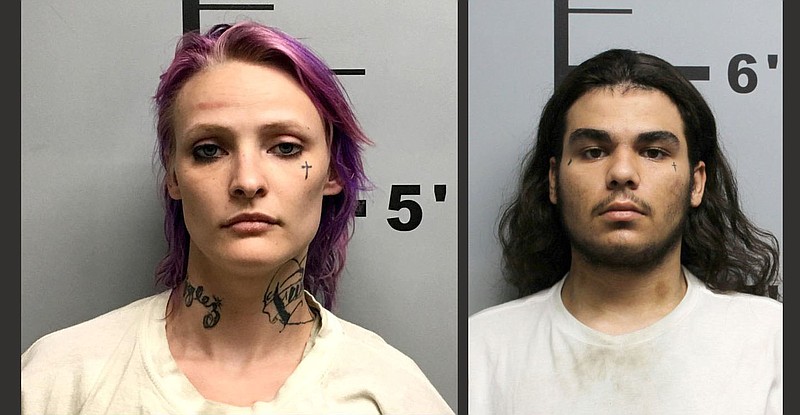 From left are Shawna Cash and Elijah Andazola

The woman accused of running over and killing a Pea Ridge police officer Saturday was out of jail despite a history of low-level theft and drug offenses and a record of not showing up for court in Benton and Washington counties.

Officer Kevin Apple was killed Saturday at a Pea Ridge gas station when he was hit by a Jeep and dragged 149 feet, according to court documents. Apple, a Pea Ridge officer for three years who had 23 years in law enforcement, was pronounced dead at the scene.

Shawna Cash, 22, of Pine Bluff was arrested in the case along with, and Elijah Andazola, 18, of Bentonville. Benton County prosecutors haven't filed formal charges against the two. The charges could be capital murder for Cash and accomplice to capital murder for Andazola.

Cash was driving the Jeep and Andazola was a passenger, according to court documents.

Cash has three open or reopened theft and drug cases in Benton County in addition to six in Washington County. Most of them in both counties include failure-to-appear charges or probation violations.

"She kept getting out, kept getting released, and covid's not an excuse, it's an explanation for it," said Matt Durrett, prosecutor in Washington County, where Cash has cases dating to 2018. "That's the reason for it, trying to keep the numbers down."

Officials released more people than usual from jails during the coronavirus pandemic to reduce the jail populations and the risk of transmitting the virus in the facilities, he said.

That said, the system failed in Cash's case, Durrett said.

Durrett said it was a combination of his preauthorizing law enforcement officers to write people citations for low-level, nonviolent felonies and release them and a huge backlog of cases stemming from the courts being closed to most in-person proceedings during the pandemic.

The criteria are that it be a nonviolent offense, local address, no failures to appear and no pending charges, he said.

Cash failed to appear twice, but because of the backlog a warrant had not been issued for her, Durrett said.

The figure excludes ones who failed to appear for Circuit Judges Mark Lindsay and Joanna Taylor's courts, who hear most felony cases, he said.

"We've got only so many staff people who can work on them, and doing close to a thousand failures to appear, it's a daunting task," he explained.

Durrett said Cash's case is a particularly bitter pill because it led to the death of a police officer.

"It's still a kick in the gut to realize that she had failed to appear and had been arrested multiple times. A missed opportunity" to get her off the streets, he said.

Circuit judges Monday ordered Cash and Andazola to be held without bail in the Benton County jail.

Benton County Circuit Judge Brad Karren issued a gag order in Cash's case, which prohibits prosecutors, police and defense attorneys involved in the case from speaking publicly on the matter.

Durrett said Tuesday that he will revisit the felony citation system with judges and jailers to try to remedy the situation.

"If we had done this, she would be in jail. There's no other way around it," he said. "There's no way to polish it up."

Durrett said he's not sure whether Cash's probation-violation arrests coincided with an arrest on a new charge.

"She's got at least four new charges, four open charges, so I don't know if she was picked up on the revocations at the same time or if she was arrested a fifth time," he said. "But, the preauthorization on felony citations failed here."

Durrett said he shares some of the responsibility for Cash being on the streets Saturday.

"Ultimately, it's my name on every one of these felony citations. So, I can't blame anybody else," he said. "Obviously, hindsight is 20-20, but a person with that many new arrests should not still be out there and should not have been cited again and again and again from jail."

Durrett said one of the terms for release on citation for low-level felony offenses is the person not having a failure-to-appear charge.

"That's a factor that's supposed to be looked at before a person is felony cited out, but during the covid pandemic we were releasing some of these people who are facing a [warrant] on monitors," he said.

Washington County Sheriff Tim Helder noted none of the charges faced by Cash before Saturday involved violence. Helder said the arrests were made at a time when the jail was full and he had inmates sleeping on the floor.

Helder said Cash's 2020 and 2021 arrests, five in all, did not show an outstanding failure to appear. Cash had a failure to appear in 2019, but she was bonded out then by the Bail Project. The Bail Project is a nonprofit group that works to get people who meet its guidelines out of jail through the bond system.

Randall Denzer, jail captain, said the facility has been at full capacity for three years and had 800 people when the pandemic began last year. They still have 40 to 50 people a night sleeping on the floor, he said.

"If it's not violent, she'd have probably gotten out anyway," Denzer said. "Who do you turn loose? The murderers and the rapists and the sex offenders and all them? I hate it that she was up there in that car because we didn't have room for her."

Denzer said the jail likely would have had room for lower-level offenders like Cash had the Washington County Quorum Court approved a 700- to 800-bed expansion of the jail three years ago.

"If they would have, we'd already be in it, and we would not have any of these issues as far as holding people," Denzer said.

Shawna Rhae Cash has had several run-ins with law enforcement in Benton and Washington counties since 2018. Here's a look at the felony criminal charges filed against Cash.

• Dec. 23, 2019: Cash was charged with possession of methamphetamine or cocaine. She has failed to appear twice and been arrested on the failure to appear twice, but has bonded out each time. The case remains open.

• July 2, 2019: Cash was charged with residential burglary and theft of property. She was sentenced to probation. Prosecutors later moved to revoke Cash's probation, but she failed to appear. Cash was arrested on the failure to appear and bonded out. The case is pending.

• Jan. 31, 2019: Cash was charged with possession of methamphetamine or cocaine. She failed to appear for court, but was bonded out. She later pleaded guilty and was sentenced to probation. Prosecutors later moved to revoke Cash's probation, and she failed to appear. Cash was arrested on the failure to appear and bonded out again on June 24, 2021. Two days later she was arrested in connection with the death of Pea Ridge Officer Kevin Apple.

• May 19, 2018: Cash was arrested in connection with theft by receiving, but the charge was later dropped by prosecutors.

• Jan. 3, 2020: Cash was charged with theft of property and fraudulent use of a credit or debit card. The case remains open.

• Sept. 7, 2018: Cash was charged with felony failure to appear. She pleaded guilty and was sentenced to probation, which prosecutors later moved to revoke. The case is pending.

• Aug. 7, 2018: Cash was charged with possession of drug paraphernalia for methamphetamine or cocaine. She failed to appear but was later arrested on the failure to appear and sentenced to probation on the original charges, which prosecutors later moved to revoke. The case is pending.

Elijah Andazola, 18, of Bentonville was arrested in connection with accomplice to capital murder, flight-escape and refusal to submit to arrest.