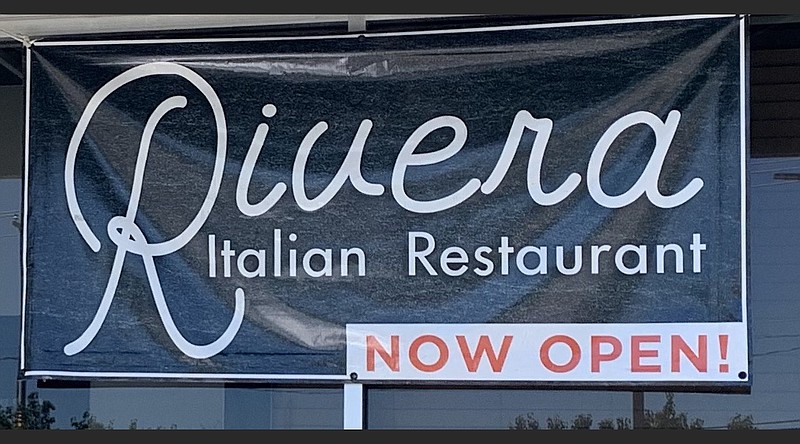 Rivera Italian Restaurant, 4546 E. McCain Blvd., North Little Rock, has taken over the space previously occupied by Layla's in a mini-plaza behind the Burger King and in front of the Walmart Supercenter. According to the website (riveralittlerock.com, and pay no attention to the logo that says "Riviera"), it is "[an] authentic Italian Restaurant that has been proudly serving the DFW area and beyond since 2000. Since then, our mission has been to provide high-quality food for all those that wish to combine fun and enjoyable ambience with skillful cooking into one extraordinary dining experience." The menu divides into pasta, seafood, chicken and veal dishes and "House Specialties." Online ordering is available. A sign on the window indicates an application for a wine and beer license that, we're told, is supposed to come through today. Hours are 11 a.m.-9 p.m. Tuesday-Saturday, 11 a.m.-8 p.m. Sunday. The phone number is (501) 955-2300.

The advent of Rivera has helped coalesce our realization that with the closure of several Italian restaurants over the past couple of years — including Ciao, Zaffino's, Cafe Prego, Vesuvio Bistro, Pasta J's in the River Market, Pasta J's West on Cantrell, Pasta House in Maumelle and the outlet of the Bravo Cucina Italiana chain on Chenal Parkway — there are surprisingly few Italian restaurants in the Little Rock metro area. A Google search turns up a number of pizza places, some of which do serve pasta (Domino's, for example, and both locations of Grady's Pizza & Subs and Gusano's), but that's not quite the same thing.

So we decided to put together a list of only a dozen or so remaining area nonchain Italian restaurants. No doubt we've missed one or two, about which our eagle-eyed readers will remind us.

◼️ And, of course, if we were including chains, various locations of Olive Garden. 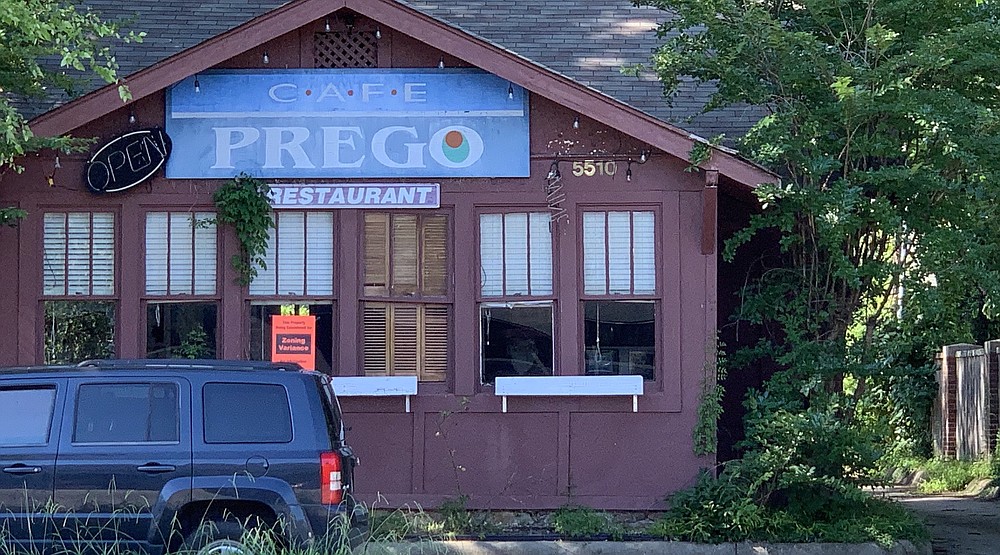 An orange placard notifies passers by that the city of Little Rock has received a rezoning application for the former Cafe Prego on Kavanaugh Boulevard in Pulaski Heights. (Arkansas Democrat-Gazette/Eric E. Harrison)

And speaking of Cafe Prego, one John Stephens has applied for a zoning change for the chalet-style building at 5510 Kavanaugh Blvd. in Little Rock's Pulaski Heights that housed it for more than two decades. Jamie Collins, director of planning and development for the city of Little Rock, says the request involves plans to "renovate and expand" the building to create "a classic Italian restaurant." That, Collins adds, includes an addition to the back of the building and an outdoor dining area. The requested variance also involves increasing the availability of parking, which at present consists of only a couple of spaces in front of the restaurant.

The matter is on the agenda for the Little Rock Board of Adjustment's July 15 meeting; there's no timeline set for when the work would take place, and Collins says the city has not yet issued any kind of building permit. We have no information yet as to a potential name for the new restaurant if it doesn't remain Cafe Prego.

Louis and Jacqueline Petit moved Cafe Prego and its Italian-Mediterranean menu from 1900 Grant St. (now the home of Fantastic China) after a French restaurant called Chattie's closed there in the mid-'90s. Brian Lane and Maureen Martin, a Colorado couple (she's an Arkansas native), bought Prego in 2012; it closed in late 2020, presumably as a covid-19 casualty.

We reported a few weeks ago the sale of the property by General Enterprises Co. to Kavanaugh Restaurant Properties LLC/Prego Inc., for $540,000.

And speaking of pizzerias, Pizza House, which replaced Pasta House at 1900 Club Manor Drive, Maumelle, apparently has opened to the public, but will now be closed through July 8 due to a death in the family of one of the co-owners, according to a post on the Maumelle All About Community Facebook page.

Meanwhile, Blue Dolphins, a seafood/chicken/sandwich restaurant with a location at 4920 Baseline Road. Little Rock, is opening soon — end of July, early August — in the former Taco Bell, 4324 Camp Robinson Road, North Little Rock. The restaurant was holding job interviews last week. The menu will be the same as the Baseline Road operation — chicken wings and tenders, catfish, rice dishes and specialty sandwiches (including gyros, Philly steaks and Italian beef). Hours on Baseline are 10 a.m.-11 p.m. daily and the phone number there is (501) 570-8383.

Samantha's Tap Room & Wood Grill, 322 Main St., Little Rock, closed since mid-February after pipes burst and flooded the basement after an ice storm, is on target to reopen for dinner at 4 p.m. Wednesday and at 11 a.m. July 8 for lunch. Expect a return to full pre-pandemic hours, 11 a.m.-11 p.m. Monday-Saturday. A Tuesday post on the Facebook page (facebook.com/samanthastaproom) mentions the return of most of the menu items, and co-owner Chris Tanner said he expects to debut two new ones (a Facebook post pictures and describes what appears to be one of them, "our NEW Tom Yum Shrimp Skewers," grilled shrimp on skewers "filled with lemongrass, ginger and garlic flavors"). We still get a recording that the mailbox is full when we call the phone number, (501) 379-8019. The website is samstap.com. 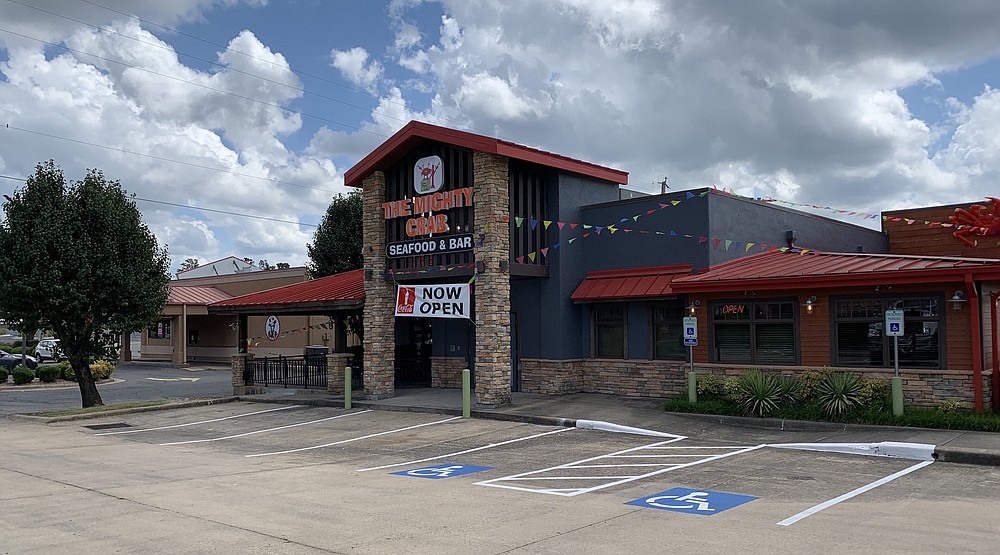 Construction is underway on a Firehouse Subs in Springdale, with an end-of-July target to open at 4914 Elm Springs Road. In addition to being the first Firehouse Subs in Springdale, it's the first Arkansas location to sport the brand's new Community Design layout, which, according to a news release, "features a repositioned ordering area, a designated space for Rapid Rescue To Go orders and a new back-of-the-house layout with a more efficient flow for crew members." The franchisees are Audie White, a former Russellville police officer who has lived in Springdale for the last 15 years, and Jason Steele, a former Springdale firefighter. They own six other Firehouse Subs outlets: two in Fayetteville and four in the greater Tulsa area. They're looking to hire 25-30 employees to fill part- and full-time crew shift members, shift leader and management positions "with positive, energetic and dedicated individuals," according to a news release. Apply online via Indeed or Monster; interviews with potential applicants will take place at the new Springdale site while restaurant training will be at a neighboring Fayetteville location.

And McDonald's is launching a new loyalty program starting July 8: MyMcDonald's Rewards, "our first nationwide loyalty program allowing you to unlock freebies simply by enjoying your favorite menu items," via the McDonald's app at participating restaurants, according to a news release. Every dollar spent on qualifying purchases earns you 100 points, which you can tote up to use toward free items.