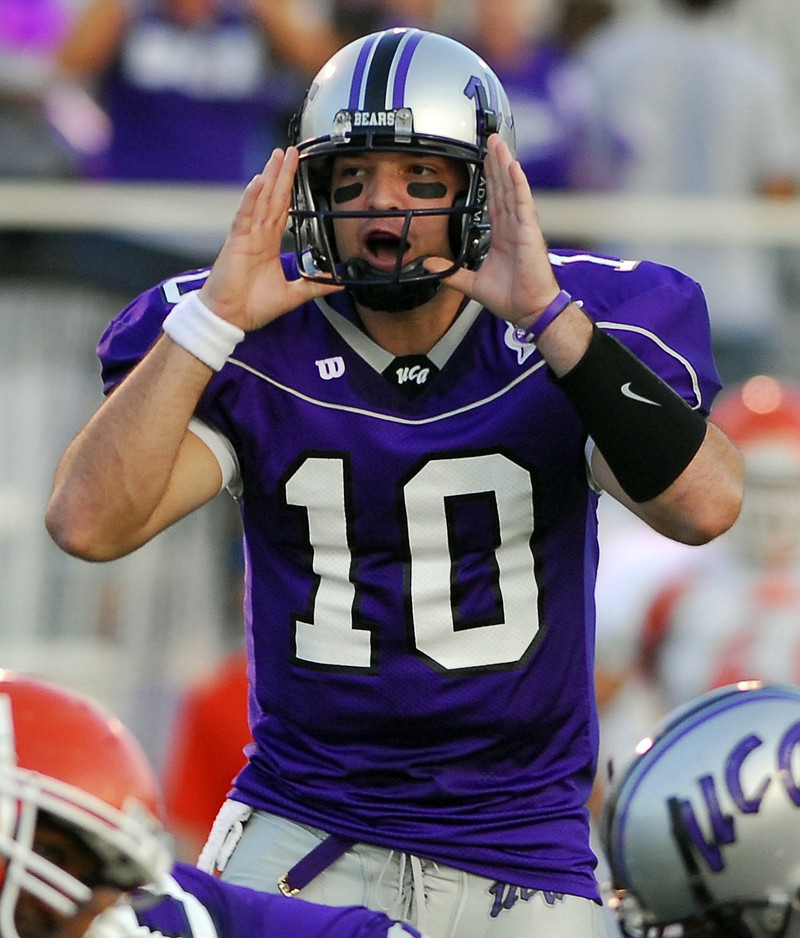 Nathan Brown passed for 3,206 yards and 21 touchdowns for Central Arkansas in 2008, when the Bears finished with the best record in the Southland Conference. But UCA was still in transition to NCAA Division I, which prevented it from claiming the conference championship. Brown is now the Bears’ head coach. (Democrat-Gazette file photo)

In only its third season in the Southland, UCA went 10-2 overall and finished atop the league with a conference record of 6-1, one game in front of Texas State at 5-2. The Bears finished the season ranked No. 12 in the Football Championship Subdivision. Quarterback Nathan Brown -- now the Bears' head coach -- threw for 3,206 yards and 21 touchdowns that season. The performance earned Brown conference player of the year honors. Postseason restrictions after UCA's transition to Division I barred the Bears from claiming the official championship, which was awarded to Texas State.

The Sugar Bears went 30-5 in 2012 and stormed to their way to UCA's first official Southland Conference title and a first trip to the NCAA Tournament. They topped Southeastern Louisiana in the first round of the conference tournament before advancing to the finals in a five-set win over Stephen F. Austin, then beat Oral Roberts in the championship match in four sets. Jessica Hays led the Sugar Bears in the final with a 28-kill performance. At the NCAA Tournament, UCA was ousted by the Washington in straight sets.

The Bears entered the Southland Conference Tournament as the No. 7 seed but went on to win five consecutive games to claim the program's first Southland title and first NCAA Tournament berth. UCA opened the tournament with a loss to Texas A&M-Corpus Christi, then won games over Stephen F. Austin, the Islanders and a pair against Oral Roberts to reach the championship, where Connor Gilmore threw a two-hit shutout in a 4-0 win over Southeastern Louisiana. The victory sent the Bears to the Starkville Regional. They won three more games before being knocked out by eventual College World Series runner-up Mississippi State. UCA won a program-record 42 games.

UCA finished 31-21 with a conference championship and first NCAA regional appearance. The Bears won four consecutive games in the Southland tournament, including a 4-2 victory over Northwestern State in the title game. UCA's season came to a close with losses to Oklahoma and Lehigh at the Norman Regional. Five Bears -- Sarah Bigej, Sam Forrest, Kylee Studioso, Briana Whisenhunt and Jessie Taylor -- earned All-Southland honors.