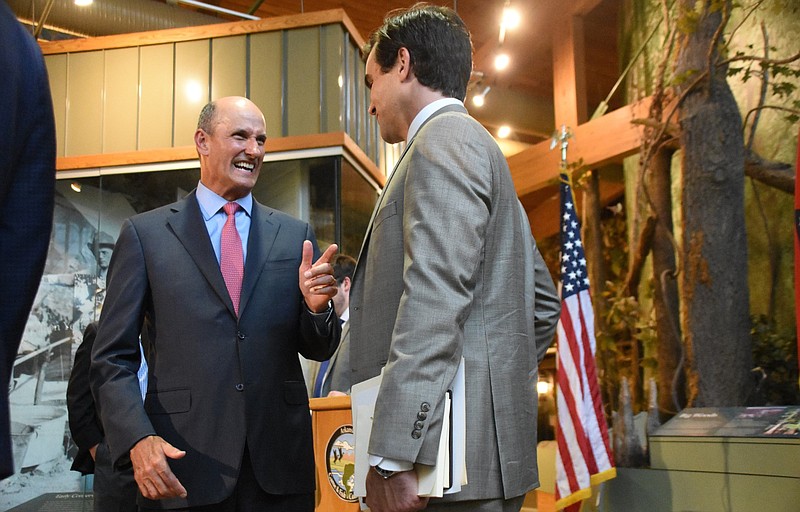 Philip Tappan (left) and Austin Booth, the director of the Arkansas Game and Fish Commission, share a laugh after the announcement of Tappan as the new Arkansas Game and Fish commissioner Thursday at the Witt Stephens Jr. Central Arkansas Nature Center in Little Rock. More photos at arkansasonline.com/72agfc/. (Arkansas Democrat-Gazette/Staci Vandagriff)

Gov. Asa Hutchinson on Thursday appointed Philip Tappan of Little Rock to serve a seven-year term on the Arkansas Game and Fish Commission.

Tappan, 60, the youngest of five brothers, was born and raised in Helena. He graduated from the University of Arkansas, Fayetteville in 1983 with a degree in finance and banking.

Tappan spent much of his career in the food distribution industry, holding majority interest in Quality Foods Group and serving as its president from 2003-05. Since 2004, he has been president of Tappan Land & Water, which owns natural resource properties in several Arkansas counties.

Additionally, Tappan has served on the boards of directors for the Arkansas Symphony Orchestra, the Arkansas Community Foundation and the Arkansas Food Bank Network.

Hutchinson said Tappan's leadership experience and record of public service make him an effective addition to the commission. Tappan's passion for hunting and fishing also will resonate with the state's outdoors community, Hutchinson added.

"Philip has a genuine passion for outdoor living and for hunting and fishing," Hutchinson said. "That's one measure of a person. Then, it's his understanding the need for conservation and the responsibility we have to our incredible natural heritage.

"Philip's business experience is particularly timely for where we are with the Game and Fish Commission. There are business decisions to make, as well as recruiting new hunters and fishermen in Arkansas, and to bring it to the next generation."

Tappan said that as a fourth-generation Arkansan raised in the Mississippi River Delta, hunting and fishing are ingrained in his personal fabric. The outdoors lifestyle, he said, is foundational to the state's culture and economy.

"I've been fortunate through the seasons of my life for Arkansas' natural resources to remain a keystone of my existence," Tappan said.

"Today, I'm probably more of a duck hunter and turkey hunter, but I still love all of the other activities."

Tappan said he experienced an epiphany of sorts in 2006 when he and his partners considered enrolling a property in the Wetland Reserve Program, a federal program that pays landowners to maintain natural wetlands.

"We heard that George Dunklin was doing some innovative things," he said.

Dunklin, of Stuttgart, served on the Game and Fish Commission from 2005-12. He is also the former president and board chairman for Ducks Unlimited and owner of Five Oaks Duck Lodge.

"I reached out to George, and a few days later we were riding around with him learning about ground manipulations, mulching understory, water controls and planting supplemental feed," Tappan said.

"I became bitten by habitat restoration. That began a whole new phase of life, which continues to this day, learning how to enhance habitat to benefit wildlife."

Tappan said that experience demonstrated the link between wildlife and habitat, proving that wildlife requires more than just undeveloped land to prosper.

"I spent time farming and working in out of doors when I was younger, but this was farming of a different type," Tappan said.

"I began to see the importance of replacing the inputs that as man we've been taking out, like recreating texture in the terrain to accelerate benefits to wildlife."

Tappan said he grew up hunting squirrels and bobwhite quail in the fields and hills around Helena.

He said he is aware of the immediate problems facing quail and wild turkeys in Arkansas, but he said those barriers might actually be symptomatic of broader issues.

"From a global perspective, we have to understand what's going on with all avian species, including the decline of songbirds," Tappan said.

"Those problems might parallel the decline of turkeys. We need to do more research, but I don't think we can wait on finding an approximate cause to effect significant fixes."

On Tuesday, Tappan attended a tour of Bayou Meto Wildlife Management Area, much of which is flooded. Game and Fish Commission staff, including waterfowl biologist Luke Naylor, organized the tour to show commission members, legislators and wetland advocates the destruction that prolonged flooding has inflicted on bottomland hardwoods in the popular duck hunting area near Stuttgart.

"I couldn't believe it," Tappan said. "When you think about how warm it's been and to still have that kind of inundation of our forests. I listened to every word Luke said when he was talking to us, but what's going on at Bayou Meto is also going on in lot of private lands.

"As we educate the public on the dilemma facing our public grounds, I hope we continue to prescribe solutions for private landowners, as well. I really think what's going on is a broader perspective than just Bayou Meto and Hurricane [Lake WMA]."

Tappan said that joining the commission concurrently with a new director, Austin Booth, is a key transitional time in which the commission can accelerate what he described as a current level of high achievement.

On the other hand, Tappan said, it's crucial to address challenges today rather than trying to address them yesterday.

"You don't have to be sick to get better," Tappan said.

"I think that applies to Game and Fish transitioning with a new director and a new commissioner. I'm not critical of anything we've done in the past, but I'm looking to improve even more."

Tappan said he believes the commission should continue to prioritize hunting and fishing not only as management tools, but as societal foundations.

"I think hunting, fishing and other outdoor activities are the most experiential learning exercises in life, and I think the woods are the most restorative places on earth," Tappan said.

"It's nothing like child rearing, of course, but the amount that you can learn in such a short period of time sharing hunting and fishing experiences with a fellow outdoors person is exponential to what you learn about them and about the craft.

"There have been many, many hunts where I can't remember whether I had a great hunt or a medium hunt, but I remember the person I hunted with." 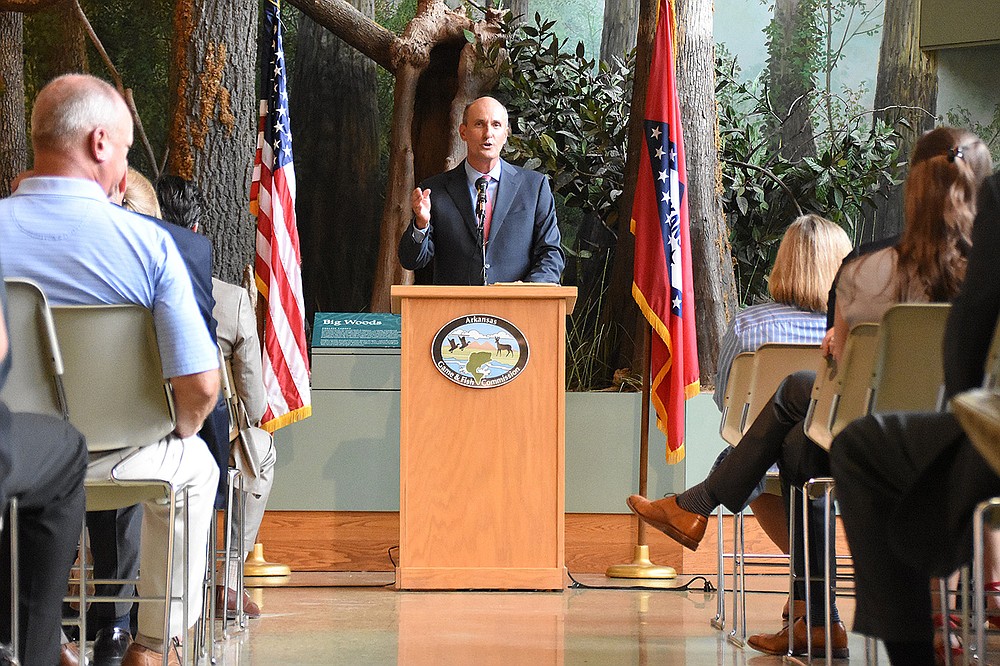 “I’ve been fortunate through the seasons of my life for Arkansas’ natural resources to remain a keystone of my existence,” Philip Tappan said Thursday after being announced as the new Arkansas Game and Fish commissioner. More photos at arkansasonline.com/72agfc/. (Arkansas Democrat-Gazette/Staci Vandagriff)