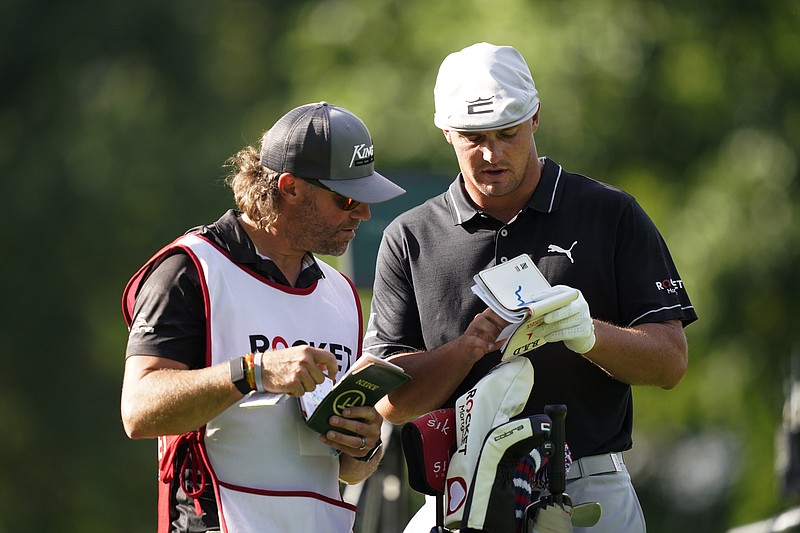 Caddie Ben Schomin, left, and Bryson DeChambeau look over notes on the ninth hole during the first round of the Rocket Mortgage Classic golf tournament, Thursday, July 1, 2021, at the Detroit Golf Club in Detroit. DeChambeau, is defending his Rocket Mortgage Classic title with a new caddie. The 2020 U.S. Open champion and Tim Tucker mutually agreed to part ways, according to Brett Falkoff of GSE Worldwide, who manages DeChambeau. Falkoff said Cobra-Puma Golf tour operations manager Schomin will be DeChambeau's caddie this week. (AP Photo/Carlos Osorio)

Bryson DeChambeau is defending his Rocket Mortgage Classic title with a new caddie, and he might not even make the cut. DeChambeau shot an even-par 72 Thursday in the opening round at Detroit Golf Club, leaving him nine shots behind Davis Thompson. After his lackluster performance and with his caddie change in the news, DeChambeau declined to be interviewed. The 2020 U.S. Open champion and Tim Tucker mutually agreed to part ways, according to Brett Falkoff of GSE Worldwide, who manages DeChambeau. Falkoff said the decision was made Wednesday, adding Cobra-Puma Golf tour operations manager Ben Schomin will be DeChambeau's caddie this week.

Her nearly two-year run at No. 1 in the women's world golf ranking over, Jin Young Ko was back on top Thursday in the Volunteers of America Classic in The Colony, Texas. Ko shot an 8-under 63 in hot conditions at Old American to take a one-stroke lead over fellow South Korean major champions and area residents In Gee Chun and Jeongeun Lee6. The 25-year-old Ko lost the No. 1 ranking when Nelly Korda won the KPMG Women's PGA Championship on Sunday for her second consecutive victory. Ko started her morning round with seven pars, made a 15-foot eagle putt on the par-5 17th and played the final nine in 6-under 29 as the temperature climbed into the mid-90s. Stacy Lewis (Arkansas Razorbacks) haad a 3-under par 68, one stroke ahead of Gaby Lopez (Razorbacks). Alana Uriell (Razorbacks) shot even-par 71.

Davis Thompson, in his third PGA Tour event as a professional, tied a Detroit Golf Club record with a 9-under 63 to take the early first-round lead in the Rocket Mortgage Classic. Brandon Hagy and Tom Lewis were two shots back. Seamus Power and J.J. Spaun shot 66, putting them another stroke behind the surprising leader. Thompson is in the field as a sponsor exemption. The 22-year-old former University of Georgia star missed the cut last week at the Travelers Championship after tying for 35th in his pro debut at the Palmetto Championship earlier in June. Thompson matched the course record shared by Nate Lashley, who won the inaugural event in 2019, and J.T. Poston. Sebastian Cappelen (Arkansas Razorbacks) had an even-par 72, while Austin Cook (Jonesboro/Razorbacks) had a 1-over 73.

President Joe Biden will host the Los Angeles Dodgers at the White House today to mark the team's World Series victory last October over the Tampa Bay Rays. The White House announced Thursday that the team, which is in town for a four-game series against the Washington Nationals, will attend the East Room ceremony. Vice President Kamala Harris, the former California senator, will also attend the event. The ceremony marks the latest step in the White House's efforts to return to large in-person events as it seeks to highlight the nation's emergence from the covid-19 pandemic. It also marks the return of ceremonies for sports champions at the White House after an inconsistent record of the tradition under the Trump administration.

Los Angeles Dodgers Manager Dave Roberts said pitcher Trevor Bauer is still on track to start Sunday against the Washington Nationals while police and Major League Baseball investigate an assault allegation made against the reigning NL Cy Young Award winner. Police in Pasadena, Calif., are investigating claims by a woman who has also obtained a protection order against Bauer, according to her attorney. Jon Fetterolf, Bauer's co-agent, has disputed the allegations. Roberts said Thursday that Bauer's availability to pitch is "out of our hands," deferring to the league. Under the Joint MLB-MLBPA Domestic Violence Policy, MLB Commissioner Rob Manfred has the power to place a player on administrative leave while allegations are investigated. Players can be suspended without being charged with a crime under MLB's domestic violence policy, which was collectively bargained. Teams cannot enforce discipline unless the league approves.

The WTA and ATP tours both canceled tennis tournaments scheduled in China and Japan later this year -- although the women's circuit said its WTA Finals are "still under discussion." The WTA said it had to scrap plans for events in Asia that typically follow the U.S. Open late in the season because of "continued covid-19 concerns and travel restrictions." The tour added that it is trying to move tournaments to offer players more opportunities to compete. The ATP said organizers of the China Open in Beijing and the Japan Open in Tokyo -- where the Summer Olympics are scheduled to begin July 23 -- "confirmed" they're being canceled in 2021 "due to restrictions related to covid-19." The men's tour added that a tournament in Morocco postponed in April now would not be held at all this year. In other scheduling news that arrived Thursday, the men's and women's tournaments at Indian Wells, Calif., will be played in October. That event was called off in March 2020 in the early stages of the coronavirus pandemic and postponed earlier this year.

Christen Press scored a pair of goals, Samantha Mewis and Tobin Heath also scored, and the U.S. women beat Mexico 4-0 on Thursday night. The U.S. extended its unbeaten streak to 43 games, matching the second-longest undefeated run in team history, in the first of two Olympic send-off matches against Mexico. The Americans extended their winning streak against Mexico to 14 games and improved to 38-1-1 overall. The lone U.S. loss in the series was a 2010 World Cup qualifier. Mewis scored in the 21st minute off a pass from older sister Kristie Mewis, and the pair celebrated with a chest bump. Heavy rain began shortly thereafter. Kristie Mewis was recently named to the Olympic roster, the only player going to Tokyo who wasn't part of the squad that won the World Cup in 2019. Press tapped in a pass from Samantha Mewis in the 39th minute. Heath hadn't played since December while recovering from injuries. She entered in the second half -- then scored on her first touch in the 74th minute. Press added her fifth goal of the year and 63rd of her international career in the 85th minute. She has been directly involved in 36 goals in her last 36 games with the national team. Mexico did not qualify for the Olympics. The U.S. and Canada will represent CONCACAF in Tokyo.

Toronto Raptors guard Jalen Harris was dismissed and disqualified from the NBA on Thursday for violating terms of the NBA/NBPA Anti-Drug Program. The league, teams and union are prohibited from publicly disclosing information about testing or treatment of any NBA player under the Anti-Drug Program, other than to announce a suspension or dismissal. As a first-year player, Harris is eligible to apply for reinstatement in a year. Harris averaged 7.4 points and 13.2 minutes in 13 games this season for Toronto on a two-way contract. Toronto drafted Harris with the 59th pick in 2020. He spent his first two college seasons at Louisiana Tech and averaged 21.7 points for Nevada in 2019-20.