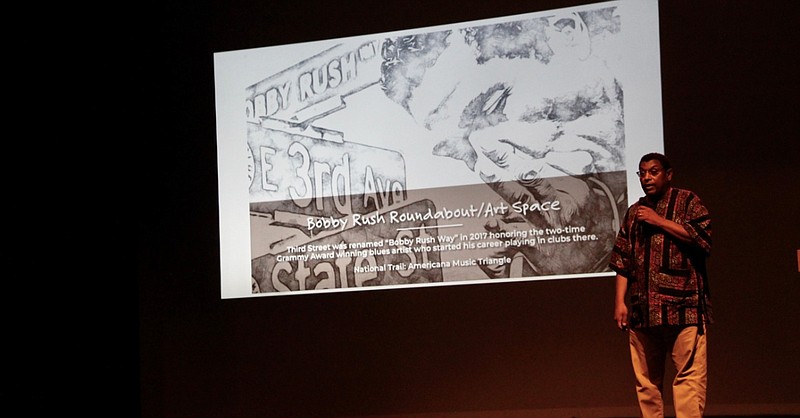 Editor's note: This is the first of a two-part series on the Delta Rhythm & Bayous Cultural District Presentation.

The presentation kicked off with the Pine Bluff Advertising and Promotion Commission Director Sheri Storie introducing the music video premiere of Bobby Rush's "America the Beautiful," which will be released July 4.

The lights dimmed as the soothing soul sound of Rush playing his harmonica filled the theater and a shot of downtown Pine Bluff filled the screen as one of his first images in his music video. Beautiful drone shots of the Jefferson County Courthouse overlooking the lake and the newly landscaped downtown also caught the eyes of the audience as they bobbed their heads to Rush's blues rendition of "America the Beautiful".

"They did a great job representing Pine Bluff in the video," Storie said, adding during editing the video staff wanted to come and visit Pine Bluff. "Seeing Pine Bluff in a national video with cities such as New York, Seattle, San Francisco and Memphis-- it just brought me such a great sense of pride. I'm so proud of our city."

The video was an interlude to get to the presentation of the Delta Rhythm and Bayou District that was designated by the city of Pine Bluff.

Jimmy Cunningham, executive director of the Delta Rhythm & Bayous Alliance, was the presenter of the evening and one of the visionaries for the concept that would include four phases, with three years to complete each one. Phases one and two were presented Thursday.

Before Cunningham went into the specifics of each attraction he presented a case for heritage tourism in the Delta Rhythm & Bayous District.

After extensive research, he said, heritage tourism is considered one of the fastest-growing segments in the industry and equates to $171 billion annual spendings. Historical places and museum parks rank on the top of the list of activities as a destination, and cultural events and festivals rank second, he revealed.

"Studies have shown that there are three key elements of heritage travel," Cunningham said. "They spend more, stay longer and travel more frequently."

Cunningham said once Pine Bluff establishes an experience for tourists, inclusion in some of the national, regional and state trails will be possible, drawing tourism to Pine Bluff.

According to Trip Advisor Reviews of "Things to Do," Pine Bluff only had 126 reviews, with the Arkansas Railroad Museum and the Delta Rivers Nature Center leading the top seven attractions that were listed.

If Jefferson County doubled its tourism rate in proportion to its population ranking, Cunningham said it would maintain a level of about $300 million per year in overall tourism.

The Delta Rhythm & Bayous Cultural District is what he believes will bring in tourism and attribute to the development already happening in Pine Bluff. The district will center around the portion of Third Street also known as Bobby Rush Way.

"To honor Mr. Rush's accomplishments and connect Mr. Rush to this area we are proposing a roundabout on Bobby Rush Way," Cunningham said.

He added a statue of Rush would stand in the middle of the roundabout. A special treat during the presentation was a video response from Rush, who was humbled by a street being renamed after him.

"Out of all the places I've been, I'm so blessed when I come back to my hometown," he said. "I think coming home like a place like Pine Bluff is just as good as winning a Grammy. Coming back here for Pine Bluff to name a street after me -- are you kidding me, man? I'm thanking God for the love I get from the people in this town."

Saturday: Part two will dive into the architect's design and thoughts on the project, community response and how this project complements the other development plans already established in Pine Bluff. 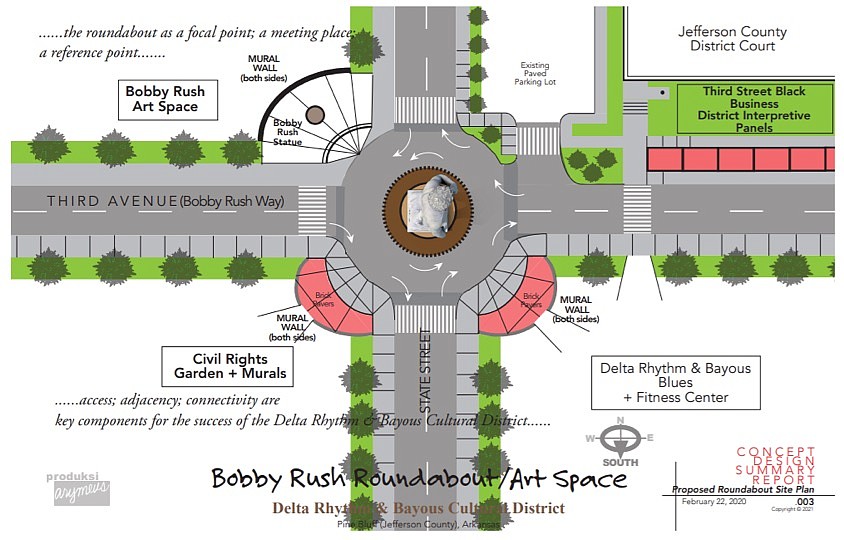 Artist rendition of the Bobby Rush Roundabout. (Special to the Commercial)