What's in a name? College athletes able to start cashing in 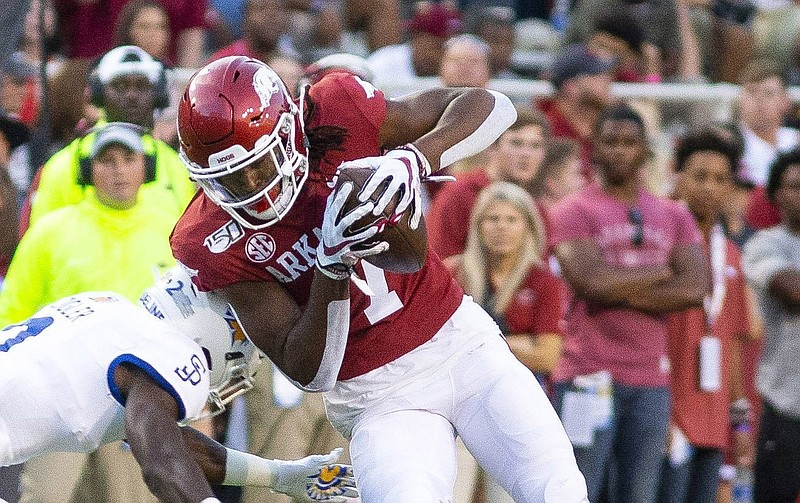 Arkansas wide receiver Trey Knox became the fi rst Razorback to announce an endorsement deal as the NCAA first allowed student-athletes to profit from their names, images and likenesses. Knox’s endorsement is with PetSmart, which will feature Knox and his husky dog, Blue. (Special to the NWA Democrat-Gazette/David Beach)

FAYETTEVILLE -- Thursday was more than the start of July.

It was the beginning of a new day for college athletes across the country, including those who compete for the University of Arkansas.

Athletes finally can be paid for their name, image and likeness without jeopardizing their eligibility.

"I'm definitely excited about it," said Terry Prentice, Arkansas' senior associate athletic director for athlete brand development and inclusive excellence. "It's a great opportunity for our student-athletes. I think they deserve it.

"We obviously need to have some guard rails up to help protect them, and we need to be here to help educate them and bring them along, but overall I think it's a great thing."

Prentice, a track and field athlete for the Razorbacks from 2009-12, has spent much of his time since being hired to a newly created position in March formulating a plan for how Arkansas will handle the name, image and likeness policy with its athletes.

Two hour-long Zoom meetings were held with athletes on Thursday so they could ask questions about the policy and more Zoom meetings will be held today.

The NCAA's board of directors voted Wednesday to officially suspend rules that previously prohibited athletes from profiting from use of their name, image and likeness.

"Most of our student-athletes already have heard some of the rules that have been presented to their teams at one point or another in the last few weeks," Prentice said. "But this will be more of an official rules education for everyone.

"We'll do some more meetings, with a combination of talking in-person and on zoom, throughout the month of July."

Prentice said he expects several more endorsement agreements involving Razorbacks to be announced in the next several days.

"You'll see some names of student-athletes on camps and clinics in their hometowns. Some student-athletes now have the opportunity to start their own businesses and show their entrepreneurial spirit."

Arkansas Gov. Asa Hutchinson has signed a bill that will allow athletes in the state to be compensated for their name, image, but the law won't go into effect until Jan. 1.

For now, Arkansas will follow a policy outlined by the NCAA so athletes in states without laws yet can benefit from their name, image and likeness.

Prentice said that before any Razorbacks can sign deals, the agreement first must be reviewed by his department. Arkansas' NCAA compliance, he said, also is heavily involved in the process.

"Student-athletes have to report everything before they execute it," Prentice said. "They have to let us know what are [companies] asking you to do? What are the terms? What's the compensation? Who are all the parties involved?

"All that runs through my office, and it's not so we can negotiate for them, because that's not my job. It's so that we can have an accurate record, and make sure we're also following the NCAA rules and our state law when it becomes official."

There are some products and activities Arkansas athletes will not be allowed to endorse or promote, Prentice said, including alcohol, tobacco, drugs, gambling and firearms.

"I do think for a student-athlete who likes to hunt and fish, that doesn't mean they can't do something for an outdoors store," Prentice said. "There are all kinds of outdoor places around the state or outside of the state that they could partner with. But endorsing an actual firearm is going to be off limits."

Prentice said the Razorbacks who get endorsement deals will not be allowed to use any of Arkansas' facilities such as Reynolds Razorback Stadium or Walton Arena in commercials.

Arkansas athletes will not be able to appear in commercials or at activities such as autograph signings or personal appearances in their uniforms or even wearing shirts or other clothing with the Razorback logo. Athletes cannot be paid for jerseys that are sold bearing their numbers.

"Student-athletes can have pregame Twitter posts or videos of them at practice in their uniforms, all of that's great advertisement for them and helping them build their following and their brand," Prentice said. "But when it comes to using their name, image and likeness to generate income, it just has to be the individual student-athletes that are promoting a product or company."

"I had one of our coaches tell me he feels like their culture already is right in the locker room. They don't think this will be a major issue," Prentice said. "The student-athletes also have been talking about ways they can all help each other.

"I've even heard that student-athletes from different teams want to collaborate [on endorsement deals]."

In May, the Arkansas athletic department announced that it had formed a program called "Flagship" to help athletes capitalize on they opportunities to manage their name, image and likeness and maximize earning potential by having working relationships with the UA's Walton College of Business and Office of Innovation and Entrepreneurship – which includes the Brewer Family Entrepreneurship Hub and McMillon Innovation Studio – along with marketing company Captiv8 and NOCAP Sports.

"Just as we prepare and train our student-athletes to compete and succeed in the classroom and on the fields of athletics competition, we are committed to positioning them for personal success with the new opportunities associated with Name, Image and Likeness," Arkansas Athletic Director Hunter Yurachek said in a news release. "Arkansas athletics was one of the first programs in the nation to add a senior staff position to lead those efforts and help Razorback student-athletes maximize their potential."

Prentice said he believes Razorbacks in all sports will have endorsement deals in the coming weeks and months.

"It's really hard to put an exact number on it, because this is developing as we go along," he said. "But every day I have an athlete from a different team approach me about an opportunity they have in their Instagram inbox or their Twitter inbox."

There is no limit, Prentice said, on how much money an athlete can be paid.

"We just ask that it be fair market value for the student-athlete, and obviously their name and their notoriety and how they carry themselves will help dictate that," Prentice said. "But we're not in the business of policing dollar amounts.

"We obviously want everything to be full of integrity and above board, but I think with the student-athletes, some are going to command more [compensation] than others. We'll have to see how it plays out.

"I think the next three to six months will teach us quite a bit, and then a year from now we'll have a lot of data and better understand what the market is, too."

When Prentice was on the track and field team, he said he had a "minimal" scholarship.

"I had to turn down full-ride opportunities to come to Arkansas because I wanted to win championships," said Prentice, who competed for teams that combined to win six SEC indoor and outdoor championships. "My parents had to make sacrifices and help pay for my education. I had to maximize everything that I could, such as saving the per diem we were receiving on the road for meals.

"So now to some student-athletes who are just getting books [paid for], if they can make $500 or $1,000 a year, it's a big, big deal. It might not be life-changing money, but it cuts into the bills and reduces what a family has to sacrifice."

Prentice, who previously worked at the Razorback Foundation and was an associate athletic director at Kansas before returning to Arkansas, credited the UA administration, notably Yurachek and Jon Fagg, deputy athletic director for compliance, for their leadership on name, image and likeness.

"I've got to give a lot of credit to Hunter for having the vision to get ahead of this," Prentice said. "From Hunter to Jon, to our compliance and legal teams, everyone has been full speed ahead."

Prentice said athletes will benefit even if they don't profit financially from their name, image and likeness.

"All of them are going to learn how to plan and prepare their taxes," he said. "How to negotiate a salary for that first job offer out of college and how to market themselves." 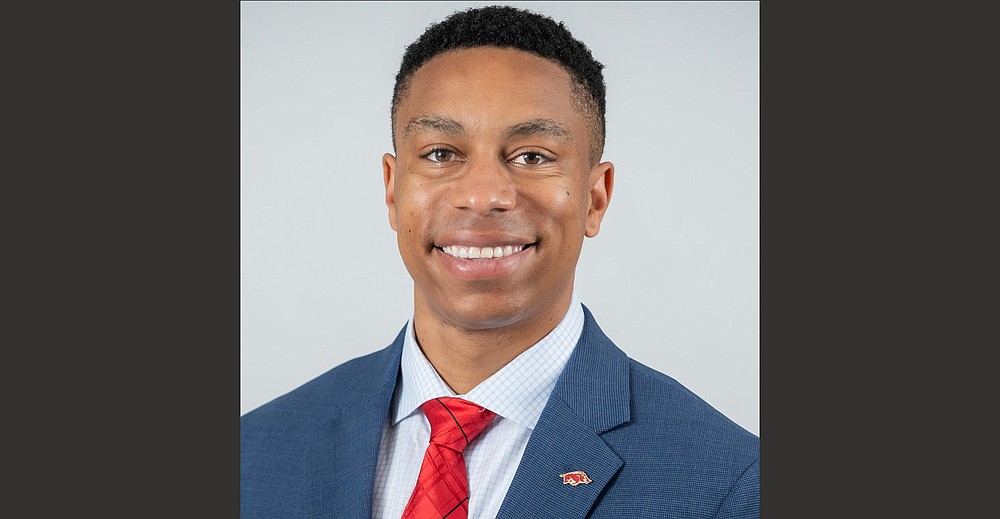 Print Headline: What's in a name?