IN THE GARDEN: Hydrangea hue dependent upon acidity and aluminum content in soil 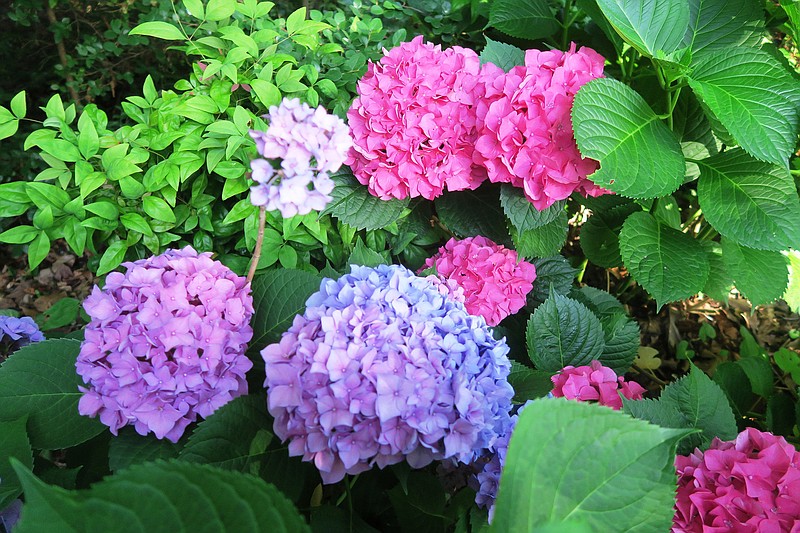 The colors of big leaf hydrangeas (aka mopheads) reflect the aluminum content of soil and soil pH. (Special to the Democrat-Gazette/Janet B. Carson)

Q My hydrangeas have been beautiful this year; I'm so thankful after last year's lack of bloom. I do have questions: How can I turn blue mophead hydrangeas purple? Do I cut off the blooms after they fade? How and when do I fertilize them?

A No one is more surprised than I am that we have such good blooms this year on hydrangeas, but I am not complaining. The color of the hydrangea is based on the pH and aluminum content of your soil. If you have deep blue, you could try using a little lime to move them more toward purple, but it is not an instant fix. It takes time to work in the soil. I have two plants side-by-side, one is blue and one is pink, and they both age to different shades of mauve. I leave my spent blooms on for the flower color change and then take them off either in the spring as they are beginning to grow or, if I think of it, after a killing frost. You can also remove them right after bloom if you want a tidier look. Fertilization is best in the spring after all chance of frost is over and when they begin to grow. One application per year should suffice. 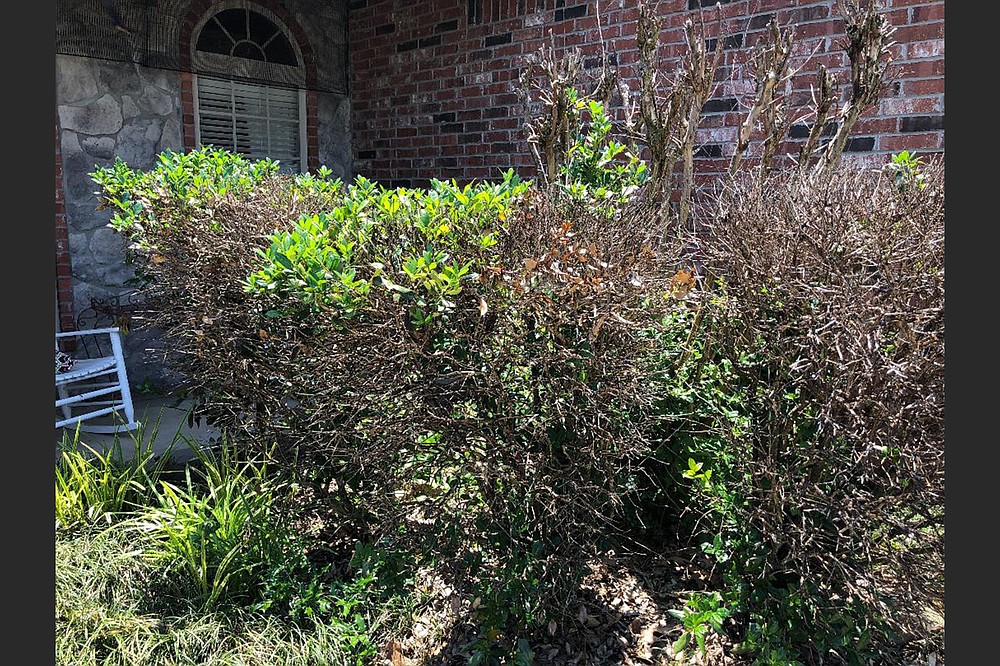 These winter-blasted shrubs can be pruned back severely and allowed to regrow, but it could take years. (Special to the Democrat-Gazette)

Q I don't know if you can identify the shrubs on the attached photos. If you can, are they too far gone to save? I assume our extreme winter freeze got them. In another picture is a crape myrtle that is always very hardy. This year there is thick growth at the base, but otherwise, it appears to be dead. Can I salvage or remove these plants? We live in Springdale. 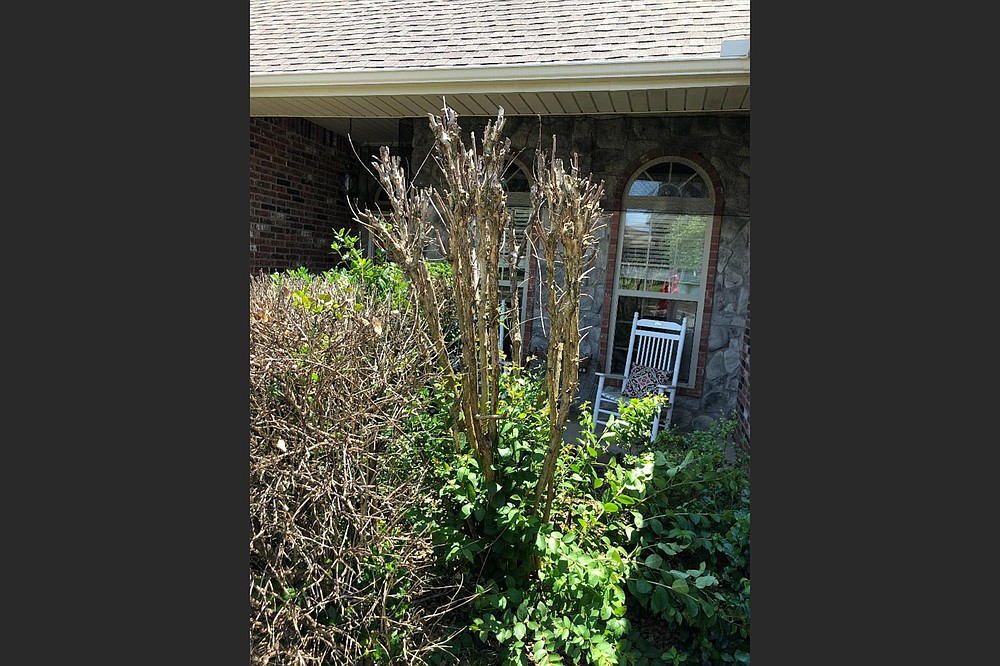 To salvage this winter-damaged crape myrtle, select three to five thriving sprouts to keep and prune everything else away at the soil line. (Special to the Democrat-Gazette)

A I am not 100% sure of the shrubs, but they look like a holly. The tall one in the back I think you know is a crape myrtle. You have two options on the shrubs. There is some life left in them but not enough to leave them as they are. You can either cut them down to the soil line or down wherever you see good growth, and over time, let them grow back; or you can dig them up and start over with something else. The crape myrtle needs to be retrained into a tree. Cut out the dead, winter-damaged limbs and then select three to five of the more vigorous sprouts — cut everything else out. Good luck.

Q During the winter storm, this camellia bush seems to have been damaged. It is about 28 years old. As you can see there are a few green leaves on it. Will it make it or should I replace it? l live in Hot Springs Village. 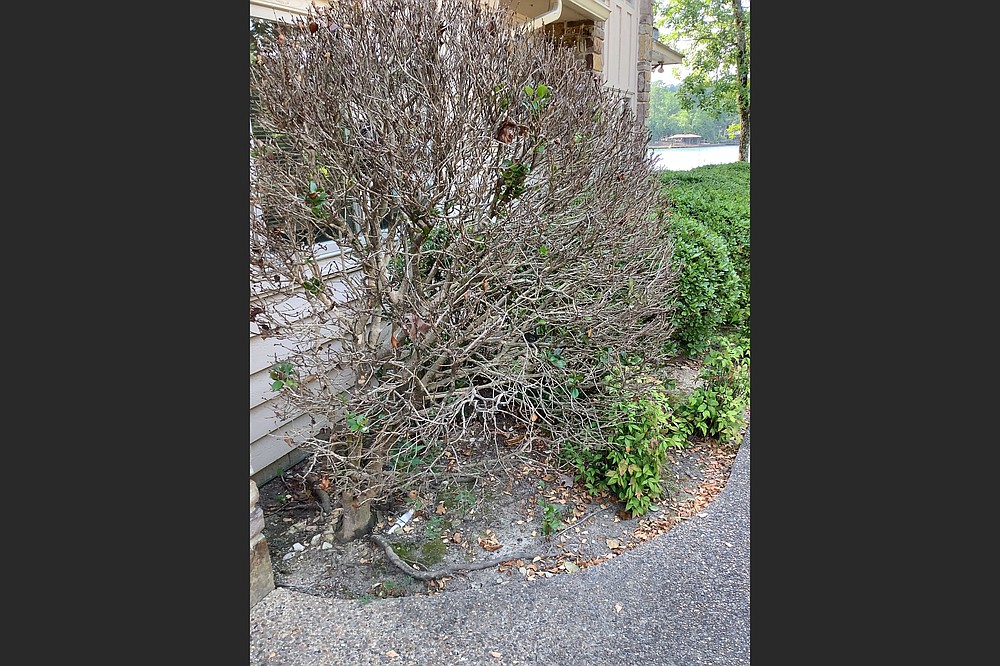 This 28-year-old camellia took it on the chin in February's cold. (Special to the Democrat-Gazette)

A I am sorry you had so much damage on your camellia. While there is some life left in it (the few green leaves attest to that), it is so badly damaged that I would replace it. If you have the patience to let it try to come back, then cut it back severely. Cut it to about a foot or so from the soil line, down to where you see green leaves. It will take several years to regrow into a large bush, if it does continue to grow.

Q I have some hedges that I have been trimming for five years. I have noticed one thing I don't like. When it rains or snows heavily, the hedge branches (or stems?) droop and stay that way for a few days until they dry out. It looks unsightly. The hedge doesn't seem to be very thick below the surface. In fact, not far down there are no leaves at all, and the stems don't seem very strong by themselves. I think I have heard something, or maybe read it in a column of yours, about clipping them with clippers down below the surface on different stems, staggered heights, to do something. I don't know, maybe I dreamed that up. I thought I would include a shot of my Nandinas (I need to get that weed pulled) that you convinced me to wait before pruning them way back. They look so awesome. 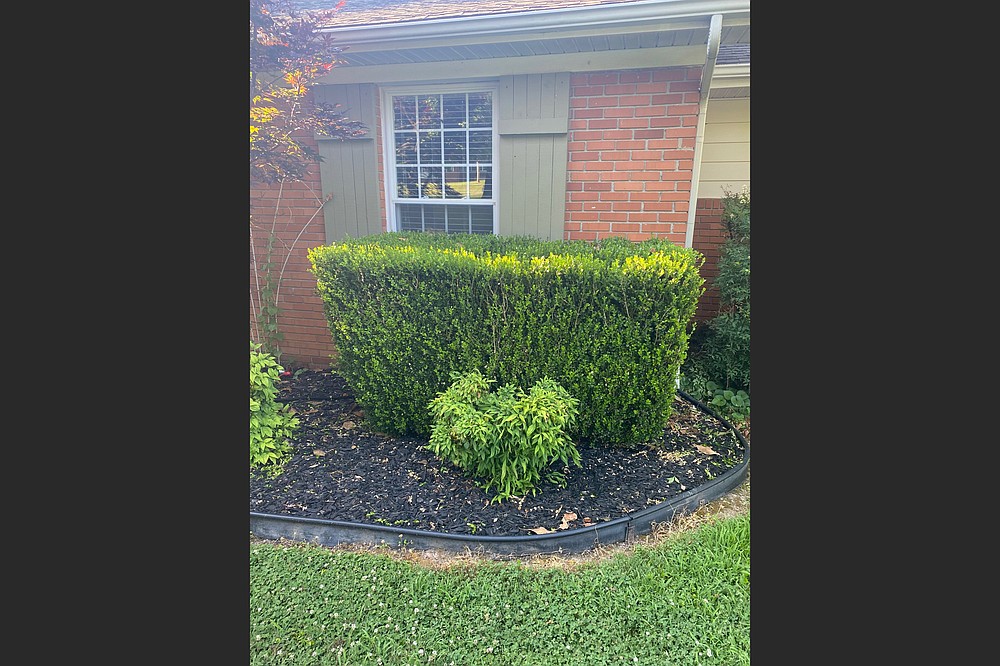 Reshaping this hedge would strengthen its stems. (Special to the Democrat-Gazette)

A Plants that are sheared as hedges are trimmed differently from stand-alone shrubs. Hedges are sheared or cut at one level, usually to keep them even on the outside. I often recommend selective pruning for shrubs, staggering pruning cuts to allow for more thickness (so, no, you didn't dream it up). Even with hedges, though, it is best to keep the angle of the cut edges narrower at the top and wider at the base. This allows sunlight to reach the entire plant profile without the tops shading the base. If you can stand a slightly shorter hedge, you could take them down a foot or so in height, which could give them more stability. This is not a great time of year to do heavy pruning, since hot and humid weather doesn't lead to rapid new growth or recovery, so you may want to live with it for a bit.