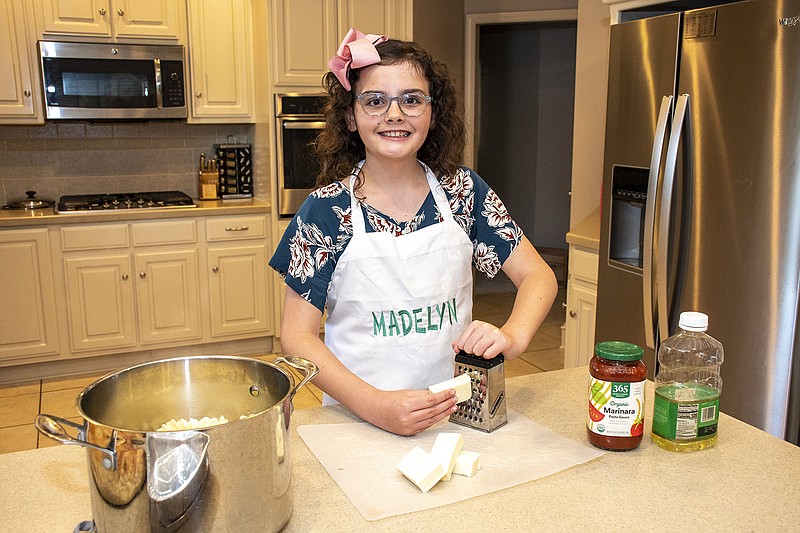 For Madelyn Lawson's fifth birthday, she asked her parents for a YouTube channel. Her mother, Kathleen, told her that if she ever had a social media presence, she needed to use that platform to encourage people to do good deeds.

In the week leading up to Madelyn's fifth birthday, the mother-daughter duo did a daily service project and filmed their efforts. While Madelyn never got that YouTube channel due to what Kathleen calls her "severe lack of editing skills," a tradition was born.

Madelyn, who turned 10 June 1, is in her fifth year of what her family calls "birthday giving." Her birthday coincided with a weekly meeting of Rotary Club 99 of Little Rock, during which Kathleen and her husband, Brian, honored Madelyn with a Paul Harris Fellow Award. The award allows Rotarians to recognize a person who has made an outstanding contribution to the community.

"The Rotary Club of Little Rock was proud to honor Madelyn with a Paul Harris Fellow for her fundraising efforts in our community," says Jeff Hildebrand, who was president of Club 99 when Madelyn received the honor. "Not only has she developed at an early age her ability to recognize nonprofits in need, but she has also picked up some valuable business practices along the way. She is a true young entrepreneur with big ideas."

Kathleen knows firsthand about philanthropic efforts. She is executive director of Economics Arkansas, a nonprofit organization dedicated to training teachers to incorporate principles of economics and personal finance into classroom curriculum.

But Madelyn's philanthropy extends beyond Economics Arkansas. Her first fundraiser was for Arkansas Foodbank's Summer Cereal Drive. When asked why she does philanthropic work, Madelyn says, "Because it's fun."

One year, Madelyn collected 86 pairs of shoes for the Ozark Water Project, an organization that relies on shoe donations to provide clean drinking water for people in Haiti, South America and Kenya. The shoes are sold for pennies on the dollar in those areas, and the money raised is used to buy well-digging rigs, water purification systems and other supplies to bring clean, fresh water to those in need.

She collected the shoes from her friends, cousins and members of her Sunday School class.

Then there is the Museum of Discovery. Madelyn has adopted an animal each year from the museum's collection. They are chinchillas Sally (2017), Bender (2018) and Paula (2019) and ferrets Bandit (2020) and Jynx (2021). Her brother Hudson tagged along last year and adopted a ball python, Zoey, so, as her mother says, "the reptiles wouldn't feel left out."

And Madelyn also has been involved with Arkansas Kids Cook's Kids Cooking for a Cause. In June, she and her friends cooked 90 meals of lasagna for Potluck's Food Rescue program.

"They give food to homeless shelters, shelters where mothers and children are trying to find a safe place to be," Madelyn says. The kids made the food themselves with a bit of parental supervision.

In announcing the award, her mother noted an absence in Madelyn's young life.

"Today is her 10th birthday and she will tell you she never received a trophy," Kathleen said at the event. "Her hobbies are history, cooking and traveling -- she just checked off her 47th state, by the way -- but those hobbies are not where trophies are awarded.

"Every time her younger brother gets a participation trophy for soccer or baseball, I feel her pain with his shelf filling. So today, Madelyn, I am giving you something far better than a participatory trophy. Today you are receiving the Paul Harris Award for all of your work in making the world a better place.

"There may not be a physical trophy but this is a recognition that you should be proud of, just as your dad and I are of you."

Editor's note: Just a few days after this interview, Madelyn sent this reporter a handwritten letter that said, "Dear Ms. Rachel, Thank you for doing a story about me. I hope to be a Rotarian some day." This scribe can report that almost every word was spelled correctly. A+ Madelyn!