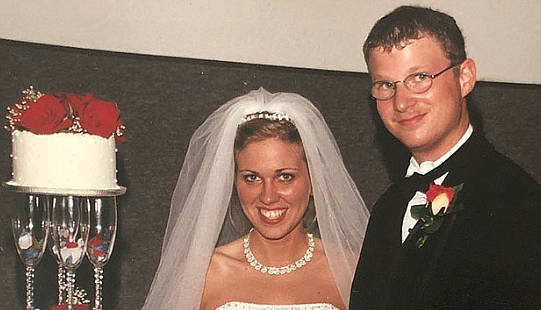 It was almost game over for Lacy Barnes and Brandon Lambert before it even began.

Lacy went to high school in Benton with Brandon's cousin and with one of Brandon's friends; Brandon went to school in Bauxite.

They were introduced over the phone, but Brandon's typical teenage-boy mumbles were hard to understand and his attention seemed fractured, at best.

"He was doing what boys do -- playing video games and wrestling and all that," she says. "I was like, 'I'm done with him.' He kept calling though."

Brandon says he was generally distracted by the audience -- usually his cousin -- while he was on the phone in those early days.

"There were probably some video games involved, too," he admits.

They decided to meet for the first time at Wendy's. He had seen her yearbook picture and she recognized him because of his truck.

"It was a black Chevrolet S-10 and it had a bed cover on the back of it, and it had a Chevrolet symbol cut out of wood on it and across the front it said, 'One Bad Bowtie,'" she says. "It's teenage boy talk. We had had a lot of conversations about that truck."

Lacy was under the impression they would be eating.

"I mean, when you say you're going to meet at a restaurant, whether it's fast food or whatever, you think, 'OK, we're going to eat, right?'" she says.

She ordered first, and then Brandon announced he wouldn't be eating.

Lacy ate anyway, defying the typical self-consciousness that hits girls around that age.

"I was hungry. I probably got a Frosty, too," she says.

Still, she thought it was odd and awkward and she again considered writing him off.

After that day, though, Brandon began plying Lacy with orange slush shakes from Sonic, showing up when she least expected it.

Lacy worked at Sonic for a while, and Brandon would show up and leave her a $10 tip after ordering just a Coke.

"He would always leave a note on my windshield or on my car somewhere," she says.

Since they didn't go to school together, they would leave their homes early almost every morning in time to meet for breakfast at Shoney's before they went to class. Brandon got out of school first in the afternoons and he drove straight to Benton High School, where he would patiently wait for Lacy to be dismissed.

He cranked up the music in his black Chevrolet S-10 while he waited and wasn't terribly chagrined when the librarian came out to tell him to turn it down.

After school meant a trip to the Sonic or a stroll together around Walmart.

"That's really all there was to do," she says. "But it's kind of funny that we both ended up working at Walmart, and I was his boss for a little while."

When they were seniors they went to Service Merchandise, which was closing and liquidating all merchandise. They took advantage of the discounts on jewelry, with Brandon buying Lacy an engagement ring on his mother's credit card. He didn't give it to her right away because he was paying it off a little at a time, but they had discussed marriage and had decided that they were as good as engaged anyway.

"When he did give it to me I didn't wear it while we were in high school because my parents would not have been OK with that," she says. "Sometime in between there we told them we were engaged and they were like, 'Yeah, that's not going to last.'"

Brandon stayed home in Bauxite, working and going to college, but they were together almost every weekend, whether he made a trip to visit her or she came home to visit him.

Within a couple of years, Lacy transferred to the University of Central Arkansas in Conway to be closer to him.

They exchanged their vows a year later, on June 1, 2002, at Primrose United Methodist Church in Little Rock.

Lacy and Brandon live in Alexander. She is the marketing director for a senior living community and he works for Falcon Jet.

It's not lost on Lacy and Brandon that their daughter is the same age now that they were when they met.

"It's so weird to think about that," Lacy says. "I think it puts a lot of pressure on her."

"He always does sweet things," she says. "He still does today. I will get in my car sometimes and find a little note on my dashboard or whatever."

She says: “I thought he looked like one of the Backstreet Boys. He was so cute.”

She says: “I was not at all nervous. We were 20 years old so we couldn’t even drink at our party or on our honeymoon, but it was still the best day ever.”

He says: “She looked gorgeous.”

She says: “Have fun and be best friends. We literally do everything together.”

He says: “Communicate and compromise.”