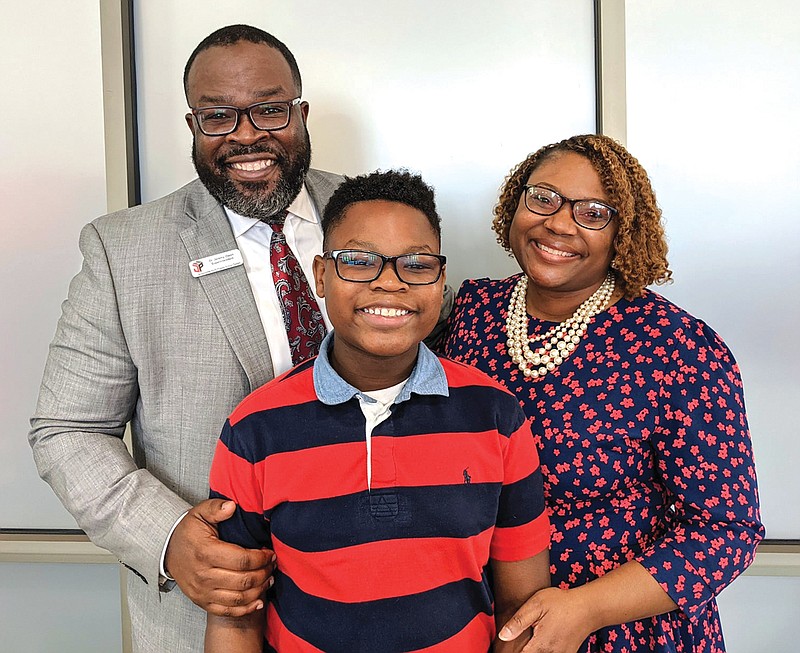 During the summer and other school breaks, Jeremy Owoh’s mom would take him and his siblings to the library, and they would spend countless hours reading.

“I would just spend hours reading in the library or checking out books,” he said. “I grew up reading Stephen King or John Grisham, or The Boxcar Children or The Hardy Boys [series].”

Even as a teacher, Owoh would assign his students one of the Harry Potter books and would be just as excited as they were when a new book in the series was released.

“I love reading,” he said. “My seventh-grade teacher in Camden, June Kirtley, lit the fire in me for grammar and how important grammar is in reading and writing, and how it really aided in your speech and articulation. She had a strong part in that love in me for grammar.”

Owoh, who was named the new superintendent for the Jacksonville North Pulaski School District in March, said one of his goals in the role is to make sure students have a strong literacy foundation, “so by the time they are in the third grade, they have become literate and functional leaders.”

“That’s going to set them up with a solid foundation when they enter middle school,” he said. “We want these young people to have strong literacy skills and have the fundamental awareness of phonics, vocabulary — all of that. We want every student to be able to have the support and resources needed to be successful.”

Owoh said he has had some really great English and literacy teachers who have enhanced his love for literature and grammar, which benefited him in other areas throughout his life.

“I tell younger administrators and students that once you have a strong literacy background, it really benefits multiple areas of your life,” he said. “One of the main reasons I want to ensure our young people have a solid foundation in literacy is because it prepares them for the next area in life — not just academia.”

Owoh worked as an assistant superintendent for the school district when it detached from the Pulaski County Special School District in 2016.

“It definitely means a lot (being named the new superintendent),” Owoh said. “It is almost surreal. I did not think I would ever have the opportunity to come back to Jacksonville. … It is definitely a highlight of my career to come back and serve there at the district that I have a lot of history with.”

Daniel Gray, school-board president for the district, reached out to Owoh about the position.

“I didn’t think we had a shot to get him,” Gray said. “He and I met a couple of times, and it became apparent that we did have an opportunity to work out a package that was acceptable. He was the one name that everybody agreed on.

“If he wouldn’t have agreed, we were prepared to hire a search firm and go through the process.”

“Jeremy was mentioned in discussion when Dr. Duffie submitted his resignation,” Gray said. “I think the world of Jeremy, and we all saw the work he did when he was with us initially.

“All of us were disappointed when he left the first time.”

Most recently, Owoh served as deputy superintendent of the Little Rock School District.

“He is such a genuine guy,” Gray said.

He earned his urban superintendent certification from the University of Southern California.

“My goal was always to be working a profession in an environment where I could have the most impact,” Owoh said. “We had community members who really invested in me and my brothers, along with my parents.

“We had opportunities, and I wanted to give back. It was the main reason why I entered education, so I could make an impact.”

Owoh and his twin brother, Jeremiah, started at UCA together as business majors. But as Owoh progressed through that program, he realized the business arena did not interest him.

“I always had a passion for working with young people. Even during my summer months at college, I would volunteer at summer camps,” he said. “I love literature, grammar, and I wanted to test the water with more English classes and education courses.

“I changed my major my senior year, and I completed the English education program at UCA.”

Owoh said his brother finished with a bachelor’s degree in business administration but was commissioned by the United States Army and currently serves as a lieutenant colonel in the Army.

From 2003 to 2008, Owoh was an English teacher at Little Rock’s Parkview High School. He taught ninth- and 10th-grade English and creative writing.

“One of the main reasons why I wanted to go into education, I wanted to be in a place where I could have the most impact,” Owoh said. “Being inside the classroom, I impacted those 30 students, but if I was an instructional leader, then I would impact students schoolwide.

“Linda Brown was my principal at Parkview, and she was a really phenomenal leader and very supportive of her teachers. I wanted to make sure I remember what it was like to be a teacher, a student and what it means to be a parent. I wanted to be a leader for all those individuals.”

Tony Wood, a former superintendent for the Jacksonville North Pulaski School District, worked with Owoh for two years, during the separation from the Pulaski County School District.

“He has a high-caliber character, and his integrity is unquestioned,” Wood said of Owoh. “As superintendent, I think he will do well, but it is a very challenging leadership role.

“He has a strong background and more than

20 years of experience, so he will meet the challenge.”