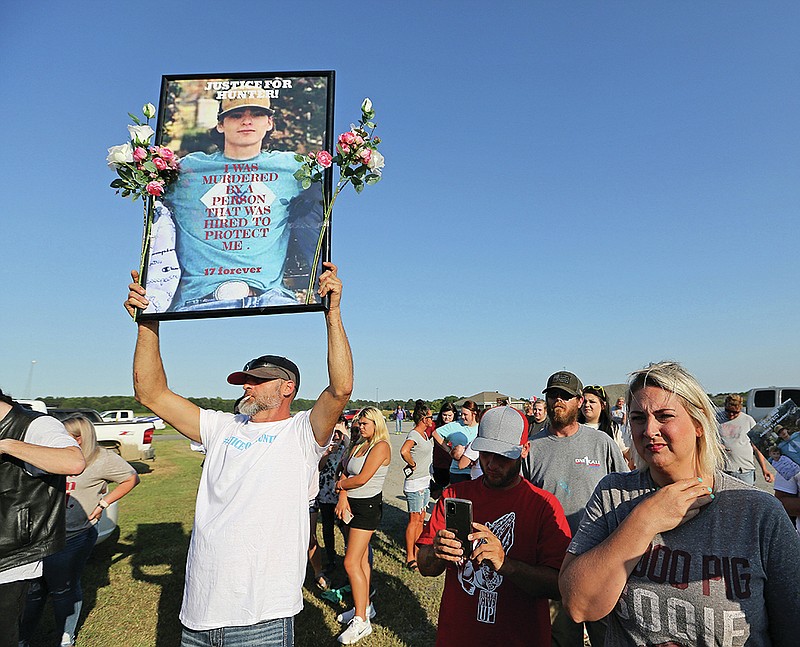 LONOKE -- Rebecca Payne smiles each night as she hugs family members protesting at the Lonoke County sheriff's office over the death of the grandson she raised in the last years of his life.

On one of those nights she laughed, and her eyes lit up as she told a story about the 17-year-old riding a lawn mower.

She isn't alone in her remembrance.

Payne and the family have been met with support from people locally and from across the nation who are calling for justice for Hunter Brittain, who was shot and killed by sheriff's deputy Michael Davis during an early morning traffic stop June 23.

The attention has brought nationally recognized civil-rights attorneys Benjamin Crump and Devon Jacob on board as the family's counsel. Crump and Jacob represented the family of George Floyd, who died May 25, 2020, while in police custody in Minneapolis.

Prominent Little Rock attorney Robert Newcomb, known for handling similar cases, has been retained by Davis. The deputy was fired for what Sheriff John Staley described as a breach of policy for failing to turn on his body camera before engagement with Brittain.

A statement from Crump and Jacob said that according to witness accounts, Brittain was shot three times by Davis after Brittain exited his truck to put a blue plastic bottle of antifreeze behind a wheel because the vehicle wouldn't shift into park. The statement said that Brittain planned to use the bottle to keep the truck from rolling toward the deputy's vehicle.

Family members said the teen spent the night working on the truck's transmission at Mahoney's Body Shop and was test-driving it when the truck was pulled over about 3 a.m. on Arkansas 89 just south of Cabot.

[Video not showing up above? Click here to watch » https://www.youtube.com/watch?v=l9Tni_03aqs]

The Arkansas State Police agency is investigating the shooting but has released few details.

Staley said that some of the incident was captured on video, but details regarding when the video started are unclear. The video had not been released publicly as of Friday.

"Body cameras are, in the overwhelming majority of cases, the only way to see the unbiased facts surrounding a police and civilian encounter resulting in injury and/or death," Crump said Thursday in a statement. "When officers turn their body cameras off, they turn off their intent to be transparent along with it."

While the family's attorneys have praised Davis' firing, Newcomb has said he was shocked by Davis' termination.

"Their body cameras are not turned on throughout the patrol because the county doesn't have the money to buy that computer storage space," Newcomb told the Arkansas Democrat-Gazette on Friday, noting that the batteries don't last for a full 12-hour shift. "You have to take two to three moves to get the camera started and going. Davis, in a high-stress moment, thought he turned it on. ... I think the failure of the body camera is more on the sheriff's office that could buy more expensive equipment where your body camera comes on as you open your door."

The failure to release video footage has become a talking point for those following Brittain's case, which had drawn support of civil-rights organizations such as the NAACP and Al Sharpton's National Action Network.

Brittain was working on the transmission of his vehicle early into the morning so he could make it to work at Scott Hundley Construction the next day, family members have said.

"He was an all-around good kid," said Hundley, Brittain's boss and owner of the company. "A 17-year-old who busted his ass more than most grown folks I know. He could run circles around some of my guys."

Brittain's grandma remembers him as fun-loving.

"He liked to go out and ride motorcycles and four-wheelers," Payne said. "He liked his friends to be around. He always had somebody around the house with him."

Brittain loved the sport of racing and was always working on something, Payne said.

"Not long after I first got him, there was a boy who lived down the road from us and he had this old lawn mower that he would ride it up to our house to hang out with Hunter," Payne recalled.

She said she woke up one night and Hunter was gone, but it didn't take long to figure out where her grandson had wandered off to.

"Those two boys got our brand new riding lawn mower and the other lawn mower and they took off down there," Payne said as those around her laughed at the story. "They were down there in grass, in grass over their head, and it's as dark as it could be."

Brittain's body was delivered to the funeral home Wednesday, his uncle Jesse Brittain told reporters. He said it was then that the family learned Brittain had been shot not once but three times.

Jesse Brittain has expressed frustration about the lack of information the family has received regarding the death of his nephew.

Staley said state troopers arrived shortly after the shooting and began collecting evidence. The sheriff said he was still at the scene when the body camera footage was pulled by state investigators.

Staley has maintained that his office handed over the case to ensure that an unbiased investigation could be completed by the state.

"You want to make sure everything is correct and signed off by the appropriate experts in their fields," he said.

Sadler said Friday that he expects the investigation file will be handed to the prosecutor in a week to 10 days.

Speaking generally and not specifically about the case, Graham said state investigation files are passed to prosecutors without a recommendation. It is solely the decision of a prosecutor to decide whether to file criminal charges.

If charges are lodged, the defendant is arrested and a preliminary hearing is held. A jury trial would then be scheduled, and it would go to court as long as a plea deal isn't reached ahead of time.

Graham has said the decision to release any body camera footage would be up the special prosecutor. He has said that could happen this week.

The only clues about what could be on the body camera footage are from a Facebook video and statement posted by the sheriff. He notes in the post that the aftermath, but not the initial encounter, is captured on the footage.

Staley has stated that he supports the release of the footage.

Training, body camera updates and dashboard cameras are something Staley mentioned when the county asked voters to support a 0.5 % sales and use tax last month. The tax passed by 11 votes.

Staley has asked for better wages for deputies who typically start at $12.50 an hour. He said the tax could help hire more deputies. Currently two deputies patrol the 70,000-person and 800-square-mile county on each shift.

"I have fought for equipment," Staley said Friday.

He added that this isn't an excuse for not having body camera footage.

"We are going to still do what is right," Staley said. "We do want dash cams. We do want the technologies that these deputies deserve, and the citizens deserve these."

Staley mentioned a need for a state funding source to help equip small police forces with the most-updated equipment.

The Task Force to Advance the State of Law Enforcement in Arkansas echoed Staley's concerns in a report it sent to Gov. Asa Hutchinson in December. Administrators reported that the absence of a body camera requirement for front-line law enforcement officers was because of the cost of cameras, storage space, redaction tools, insufficient personnel to manage Freedom of Information requests and concerns regarding residents' privacy.

Act 786, which stemmed from the report, went into effect April 21 and created the Public Safety Equipment Grant Program to be administered by the secretary of the Department of Public Safety. Grants may be made for equipment, training or accreditation, including body cameras with auto-activation capabilities, in-car cameras with auto-activation capabilities, cloud-based storage services and on-premises server hardware and storage.

The family's attorneys have mentioned the need for additional training for officers, saying Brittain's death "points to the urgent need for increased training and policy enforcement in every police department across the nation."

Newcomb also noted that only three deputies were on duty the night Brittain was fatally shot.

Davis, who has an option to request a grievance hearing from the county, has cooperated with state police investigators, Newcomb said.

"This is a tragic event," he said. "A young man lost his life, and an officer is carrying that for the rest of his life."

Newcomb also represents Little Rock officer Charles Starks, who was reinstated after being fired over the fatal shooting of Little Rock resident Bradley Blackshire, 30, on Feb. 22, 2019.

According to the dashboard-camera video released 14 days after Blackshire's death, Stark fired his weapon at least 15 times after Blackshire failed to comply with Starks' orders to exit the vehicle and the car rolled forward and grazed Starks.

Pulaski County Prosecuting Attorney Larry Jegley did not pursue criminal charges against Starks, but Police Chief Keith Humphrey fired Starks for breaking police procedure over how suspects in moving cars should be approached.

Starks sued and was reinstated by court order in January 2020, although he resigned in September.

Civil cases stemming from the original firing and resignation are still working their way through the court system, Newcomb said Friday.

Brittain's funeral will be held Tuesday at Beebe Schools Auditorium, where he would have been an incoming high school senior.

At the request of Brittain's family, Sharpton will give a eulogy on the need for interracial support against police brutality in America at 10 a.m., according to a news release from the National Action Network. Crump also also expected to give remarks, as well as Payne and Jesse Brittain.

The NAACP also has expressed support for the Brittain family.