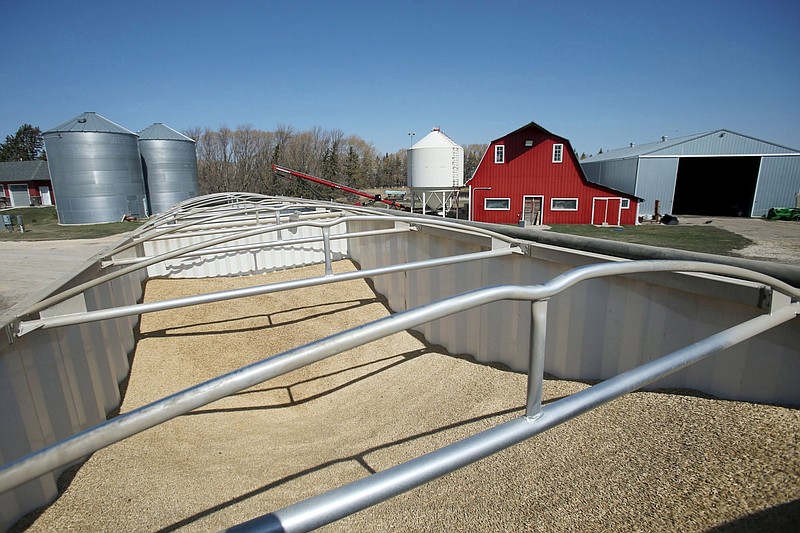 The world is counting on farmers in North America for big harvests of everything from corn to canola this year. As a result of weird weather patterns, growers will likely come up short.

The U.S. and Canada are seeing unusual variability in climate, with some crops withering from severe heat and drought while others see flooding. Meanwhile, demand is surging as economies recover from the coronavirus pandemic, so much so that every grain counts.

The culprit is an abnormal high-pressure system that's likely to remain in place during a key period of the growing season when plants are blooming and developing. It's responsible for the hottest temperatures ever in the U.S. Pacific Northwest while forming a trough across the central U.S. that's bringing rain showers. The hot and arid conditions have moved east, spilling over into farming areas in the U.S. Plains and Canadian Prairies, hurting everything from spring wheat that goes into pizza to canola used for cooking oil.

With output in major exporters like Brazil already diminished, the wild weather is contributing to more volatility in crop markets with canola prices hitting a record and spring wheat at multiyear highs.

"Rain, hail, drought, we've had it all," said April Hemmes, a fourth-generation farmer in north-central Iowa.

In the past, both drought and rainfall would normally be milder and more widespread. But the world's climate is changing and getting more extreme, resulting in pockets of lushness and harsh dryness. Crop conditions in parts of the Midwest and mid-South regions are near-ideal.

While millions of acres of cropland in western Iowa are suffering from dry conditions, other farmers that did get rain saw a deluge, which put plants at risk during the biggest crop price rally in almost a decade.

Hemmes' fields had such dry corn last month that the leaves rolled up to conserve moisture.

Meanwhile, down in southeastern part of the state near Ottumwa, Pat Swanson said rain in late June started out as a blessing. Then a hail storm followed by 6.5 inches of rain washed out the gravel road leading to her 2,000-acre soybean and corn farm that she runs with her husband, Don.

Parts of those fields "might not produce anything," Swanson said.

Some farming towns in southern Minnesota, a major grower of wheat, corn and soybeans, are seeing the least rain since 2012 and the hottest temperatures in over a decade. In neighboring North Dakota, conditions of the spring wheat crop are the worst since 1988 in government data.

North Dakota farmer Paul Anderson, who in May ditched his struggling spring wheat in favor of corn, planted the corn seeds extra deep so the roots could reach subsoil moisture.

"Corn is hanging in there but we took extra precautions to get it in," Anderson said.

Farmers on each side of the U.S.-Canada border are boosting plantings, spurred by high prices and dwindling inventories, but yields are suffering. The Canadian government said last week that farmers planted the most canola in three years.

Environment Canada has issued heat warnings throughout much of the western half of the country, even as far north as the Arctic Circle.

The country, better known for its frigid winters, faced a scorching week as the heat wave moves east into key agricultural provinces Alberta and Saskatchewan, major producers of canola. Temperatures are forecast to peak around 104 degrees Fahrenheit.

Fields are starting to bloom, which means bloom-blasting may occur, which is when canola flowers drop without developing into oilseeds," said Keith Ferley, commodity futures specialist for RBC Dominion Securities Inc. in Winnipeg.

Temperatures of just 91 degrees Fahrenheit could hurt yields, which is "almost a done deal," said Chuck Penner, an analyst with LeftField Commodity Research in Winnipeg.

Swanson, who dealt with the floods, is farming in the only part of Iowa not currently affected by abnormal dryness or drought. She's still nervous with arid conditions blanketing most of the state.

"You have to be optimistic or you would never farm," she said.

Information for this article was contributed by Dominic Carey and Brian K. Sullivan of Bloomberg News.