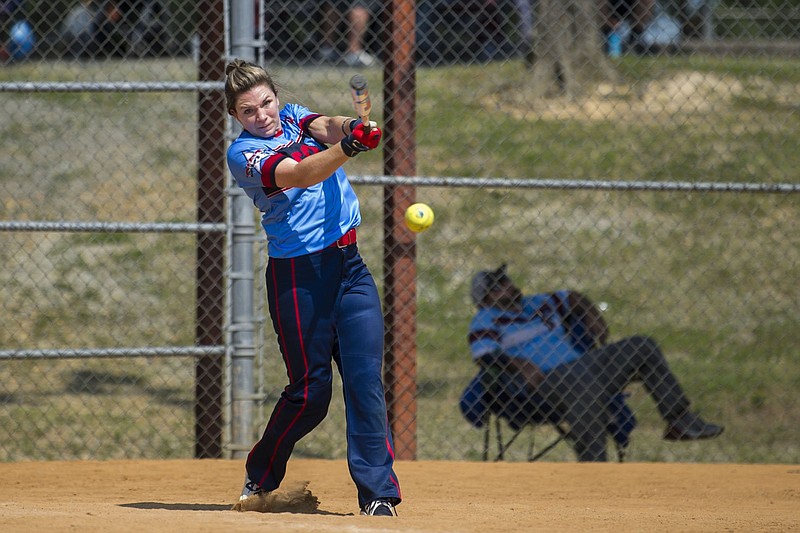 Amber Parrish from Proton in Florida hits a single during their game against Midwest United in the Busch Classic Softball tournament on Saturday, July 3, 2021...(Arkansas Democrat-Gazette/Stephen Swofford)

T24/Proton of Florida outscored Arkansas' Lady NC Softball and Kansas' Rhino Roofing/Midwest United by a combined score of 41-9 prior to their fourth-round matchup with Arkansas-based Smash It Sports Traders Reload later Saturday night.

Donaldson's group is not only trying to defend its Busch title in Sherwood but also attempting to maintain its status as the nation's best team after winning the United States Specialty Sports Association World Series last year.

"One of our sponsors really likes coming up here, and we enjoy it," said Donaldson, whose team also won the World Series in 2019 and 2018. "This is our third year playing in it, and we've done well. We try to just do what we do every time we go out there, try to be exciting and try to play hard."

All of that was on display Friday and Saturday. T24/Proton, who beat Karma out of Georgia 21-18 in the 2020 Busch final, blitzed Lady NC Softball early in a 27-5 blowout on opening night. Less than 24 hours later, they kept things interesting against Rhino Roofing/Midwest United until a two-run, inside-the-park home run from Meagan Pearson opened the floodgates in a 14-4, five-inning victory.

"The effort is what we care about," Donaldson said. "Our biggest thing is just staying together. It's what we do. We always want to get better, and after winning it [World Series and Busch Classic], we know we're going to get everybody's best.

"Our preparation is important because of that. As coaches, we've got to get them ready for that, and I think the girls have responded to that challenge. We don't change anything as we go. ... we just get out there and lay it on the line."

Smash It Sports/Newbreed of North Carolina found itself in a tussle for a while with Texas-based Thunder/Chosen on Saturday afternoon, but a flurry of long balls enabled the tournament favorites to roll.

Ten home runs highlighted a 28-13, five-inning rout for Smash It Sports/Newbreed, which came into the Busch Softball Classic as the No. 1 team in the latest United States Specialty Sports Association Slow-Pitch Men's Major rankings, but the team was coming off a 1-2 showing in last month's Windy City Major tournament. So Coach Mark Katz wanted his team to loosen up more this week in Arkansas.

"We've got the Smoky Mountain Classic next weekend in an unlimited home run tournament," Katz said. "We wanted to get our guys here and let them unload, let them swing and have fun. It's worked out well thus far."

Through their first three games of the Busch Classic, Katz's team had scored a combined 92 runs, including 42 in a 29-run blowout of Whut It Dew of Texas earlier Saturday. But Smash It Sports/Newbreed had a hard time putting Thunder/Chosen despite its flurry of home runs.

Smash It Sports/Newbreed smacked home runs in each inning, including three in both the fourth and fifth innings. Thunder/Chosen hit seven home runs themselves, including three from Elijah Christensen. It was 16-10 in the bottom of the fourth before a two-run home run from Tyler Marshburn started a 12-run rally that led to a run-ruled victory.

"We definitely want to try to win this tournament," said Katz, whose team also had a late game scheduled. "We want to take that No. 1 seed into Tennessee next week in what's one of the biggest tournaments of the year. So we'll focus on this one, then go from there."

Marshburn and Jason Martell both had two home runs for Smash It Sports/Newbreed.

Happy to be back

Ellen Ellis is making the most of her return to the softball diamond.

After missing an extended period of time because of covid-19, the Greenbrier native smiled from ear to ear after her Arkansas Relentless team's 19-9 victory over WBE of Oklahoma.

Her grins were easy to explain. She was just happy to be back on the field alongside her teammates.

"It feels great," she said. "I love playing this game, and coming off recovering from covid, it's exciting for me. I didn't get a chance to play last week in a tournament in Texas, but the team played well. I wished I could've been there, though."

Ellis was in the lineup Saturday at Burns Park to help her team notch victories over WBE and Lady Militia out of Mississippi in their first two games of the day in the Women's D/E division. Against WBE, it was her home run over the right-center field fence that ended things early in a 10-run victory.

"I felt so bad that I wasn't there for my team last week," Ellis said. "They got second place, and I was so happy for them because this is such a great group of people. We've been together two years, and we're all family.

"We're all from the Central Arkansas area, and we hang out together outside of softball. So it's just an overall great feeling to be back out here with them."

Busch Classic founder Clint Albright believed having two classes ushered into the Arkansas Softball Hall of Fame at the same time would be special. Based on the turnout for Friday night's festivities, he was right.

The main pavilion at the Sherwood Sports Complex was packed as those in attendance witnessed 26 new inductees get recognized. Last year's ceremony was canceled because of the coronavirus pandemic.

"It turned out really nice," said Albright, who constantly moves from field to field and station to station while the tournament goes on.

The championship games for each division are set to take place today, beginning with the Men's Major final at 10:30 a.m. at the Sherwood Sports Complex. The Men's C title game will be at 5:20 p.m. while the Men's D and Men's E finals with be at 3 p.m. and 4:10 p.m., respectively. Both the Women's Major and D/E championships will be decided at 10:20 a.m.