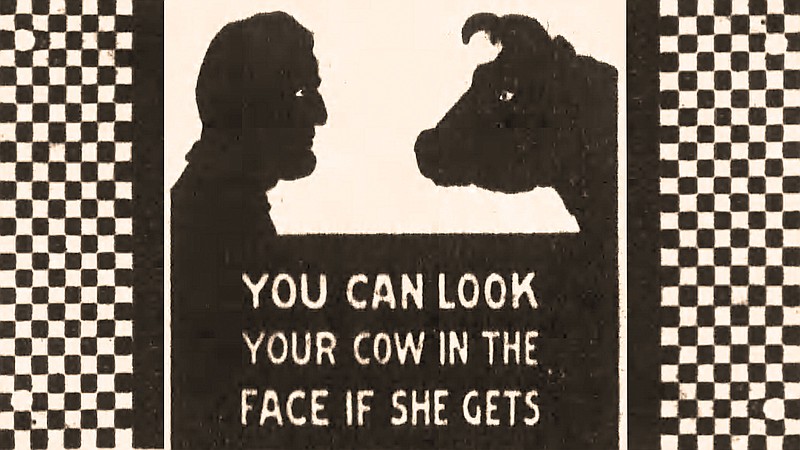 Ad from the May 21, 1921, Arkansas Gazette. (Arkansas Democrat-Gazette)

Can you look your cow in the face?

That pitch in an advertisement for Cow Chow was so cute in May, when I came across it in the archive of the 1921 Arkansas Gazette, I started hunting for an excuse to write about cows. It didn't take long to find one.

Just about a century ago — 100 years and a handful of days — Little Rock Mayor Ben Brickhouse signed a controversial ordinance about cows.

On June 29, 1921, he endorsed the City Council's decision to limit residents to one cow per household. And there were new regulations regarding that cow, too. July 1921 was not a great month for people who kept cows. The Gazette reported:

"Enforcement of the ordinance, he said, would be held in abeyance for 20 days to afford those having more than one cow to dispose of the remainder."

The measure also outright prohibited keeping goats and hogs in town. Folks let Brickhouse know they were not happy. The June 30 Gazette and Arkansas Democrat published a statement from Brickhouse, to wit:

"While it distresses me to be compelled to limit the rights of the citizens in reference to this question, I am impelled by the very highest motive in doing so. The ordinance was recommended by the Board of Health after a thorough study of the danger of a typhoid fever epidemic in Little Rock.

"The Board is composed of three aldermen, the city attorney, three physicians and the mayor. The physicians on the Board of Health are men of high standing in the community, professionally and otherwise, and two of them are serving the city without pay. The ordinance was also recommended by Sergeant Frost, typhoid fever expert of the United States Public Health Service.

"Another reason for the passage of this ordinance is that the bad odor coming from cow and hog pens [causes] a great many people to suffer as a result of same, and no citizen ought to want to keep or maintain a condition on his premises that tends to make life unhappy for his neighbor."

Gallery: The one cow rule

If you've ever met a milk cow, you know these lovable creatures make good pets. And while families with a patch of land could save money by keeping a milk cow to provide for their own table, they also could make needed income by selling her calves. Before the 1921 ordinance, the more land around your home, the more cows you could have. And you could sell your extra cows right in town at one of the city's conveniently located wagonyards.

Also known as "livery stables," wagonyards were multipurpose businesses combining places to sell your cows or park your car; pens in which your bull could provide stud service; haylofts in which ne'er do wells might meet to transact illicit transactions ... as well as other public services, all encircled by a crown of flies and the aroma of livestock.

Coincidentally, another measure Brickhouse ruled upon that long ago June 29 was an even more controversial ordinance that banned the operation of wagonyards in a substantial section of downtown. But wagonyards are a story for another day.

Was the problem with the cows less about public health and more about bad odors? Later reports in the archives suggest otherwise. But the prohibitions appear to have landed hard on Black farmers.

The July 12 Gazette reported that 75 very polite protesters, principally Black people and owners of cows and hogs, had showed up before the start of the weekly council meeting. The mayor told them the ordinance had been written by the Board of Health and would safeguard them as well as everyone else.

"He assured those who were protesting that it was not intended to be discriminatory and that its operation would be for the general good of all. The audience appeared satisfied and all left good naturedly after extending their thanks to the council by a rising vote."

By "a rising vote," I believe the reporter meant that the people stood up and said thank you individually. Roberts Rules of Order defines rising vote in a way that doesn't sound likely to have happened before a meeting (see arkansasonline.com/75rise).

The next day's Gazette carried a report from Dr. John Thames, city health officer. Fourteen cases of typhoid had been confirmed in June. Investigations in each case ruled out city water supplies or commercial dairies as sources.

The cases were distributed within an area from 1018 E. Ninth St. to 3114 W. 11th St., and from 121 Izard St. to 2423 S. Gaines St. In some of the cases, the sick people got their milk from privately kept cows handled by various people. In other cases, the people had picnicked or gone swimming in the countryside. Some visited towns where typhoid was on the loose.

This was not the city health department's fault, Thames said:

"We therefore conclude after this thorough investigation and tracing the cause of method of deduction that the real cause is one of careless indifference on the part of those who have contracted the disease and not one over which the city or the city health department has any direct control."

While there was no cause for alarm, he said, all citizens ages 2 to 50 should be inoculated against typhus every three years. The Health Department offered free shots every Tuesday and Friday morning.

Thames added, "Second, during these warm months the public should use every means possible to break all the feeding and breeding places of flies, and to destroy all old flies by trapping, swatting or poisoning them. They should be particularly careful to use no water, milk, or other food unless they know its purity.

"By practicing these simple rules during the warm months they will be able to escape typhoid fever, for the public should remember that typhoid fever is not transmitted through the air, and every person who comes with a case may be absolutely sure that he has eaten or drunk something that has come from the intestine of some human being, and the common housefly is in nearly every instance the guilty insect that transmits the germ from the infected person or place to the victim."

Is anyone else bothered by the extent to which truth can be disgusting?

The one-cow rule took effect July 18. On July 22, the Gazette quoted Thames again, explaining the rules. To keep your cow, you had to apply to the city health department. You had to report where the cow was kept and furnish a certificate — from a regularly practicing veterinarian in good standing — that the cow was healthy and had been tested for tuberculosis.

"The measure makes it unlawful to keep or maintain a cow on any lawn or within any pen or stable within the radius of 50 feet of any occupied dwelling or part thereof, or any place where food is stored or kept for sale."

Flies. This is why we can't have nice things.