‘Her queerness empowered me’: KATV journalist gains TikTok following by living out and proud 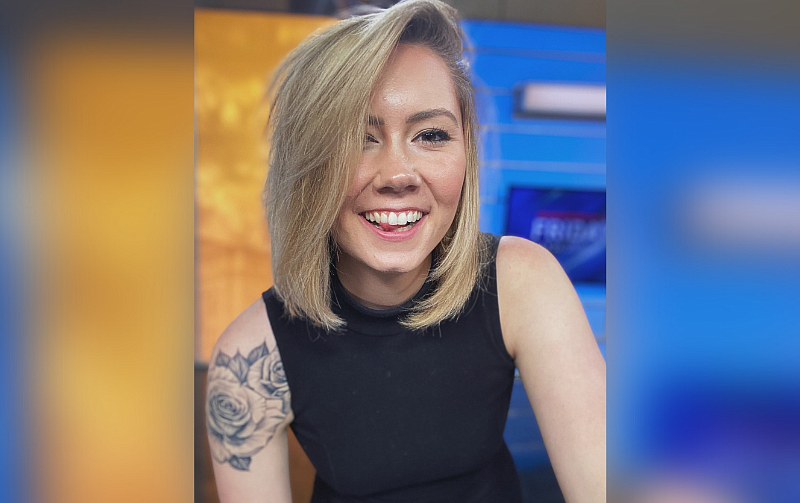 Viktoria Capek was scrolling through TikTok last summer when she came across a video from a blond female broadcaster making a joke about being queer.

“I was like, oh my god, timeout — I fit all of those boxes,” Capek said. “I literally look like her.”

It took off, getting hundreds of thousands of views, and a year later, the KATV reporter and show host has over 150,000 followers, many drawn to videos she makes about being a queer woman in news eager to push the boundaries of a fairly traditional profession.

“People loved the idea of these LGBTQ news anchors, just being out in the open and showing that they were having fun in between all the seriousness of the work,” she said.

Capek has posted videos on her account, @viktoriaacapek, showing how she gets ready for her job — starting with an alarm at 2 a.m. — as well as more standard TikTok fare, such as dancing videos and shots of her cat.

She’s also posted about what she believes are outdated standards of dress and appearance in broadcast, particularly for women, and the ways she pushes back against them: wearing a suit or pants instead of a dress, for example, or once, showing her shoulder tattoo on air.

That didn’t go over so well with some viewers, Capek said, and she posted to TikTok about how she was going to be required to keep it covered.

TikTok fans called and wrote into the station after that video — even though Capek said she asked them not to — saying it was unfair she had to cover her tattoo and that there was nothing “unprofessional” about it.

One message from the incident still sticks out to Capek and reminds her why she makes TikToks and keeps pushing against traditions.

“It was basically this mom writing in saying, ‘I just want to give a big thanks to Viktoria Capek for being so brave about showing her differences on air and being openly LGBTQ — my child is a member of the LGBTQ community, and we are able to have these wonderful discussions about what Viktoria is doing and how she's trying to change things that have been such a traditional standard for so long,” she said.

It’s not just viewers who have found comfort or strength in seeing Capek’s videos about being a proudly queer woman in news.

Nico Pennisi graduated college in 2020 with intentions to begin a career in broadcast journalism, but with the pandemic, “it kind of seemed like all those doors that had once been opened for me were shut and locked.”

He worried as a queer Latino person he would struggle to find a job because “different aspects of my identity are not things that meet middle mainstream America” values.

Then Pennisi saw Capek’s videos and felt inspired to start applying for jobs. He landed one within a month at WFFT, a station in Fort Wayne, Ind.

“Seeing Viktoria be so open about her queerness empowered me to want to get out there and do the same,” he said.

Although her TikTok experience has been mostly positive, Capek said social media can still be frustrating and exhausting.

There will always be “haters” she calls them, and sometimes she wants to quit it. But when people like Pennisi tell Capek how her videos affect them, she feels differently.

“I hear a story like that and it makes it really difficult to think about turning it away because I am making an impact,” she said. “Whether I want to admit that or not, my silly videos and my constant necessity to be this very transparent and genuine person is making a difference.”