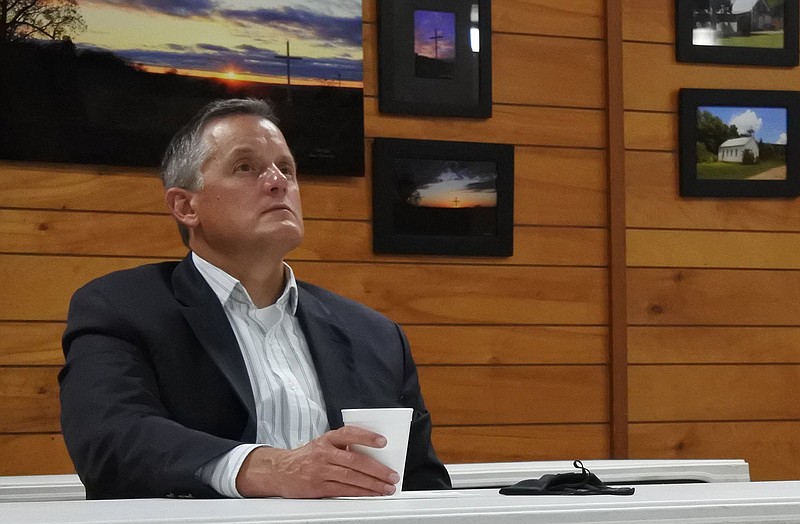 WASHINGTON -- While some Republicans have portrayed global warming as a "hoax," others are expressing concern about the rise in greenhouse gases and a desire to address what they describe as a genuine problem.

House Republicans recently launched what they're calling the Conservative Climate Caucus to highlight the issue while also combating "radical progressive climate proposals that would hurt our economy, American workers, and national security."

On the Senate side, Republicans helped launch a Bipartisan Climate Solutions Caucus in 2019; no Arkansans are listed as members.

Last month, dozens of Republican senators also joined with their Democratic colleagues to advance the Growing Climate Solutions Act. It would direct the U.S. Department of Agriculture to create a program "to reduce barriers to entry for farmers, ranchers, and private forest landowners" who wish to participate in a voluntary environmental credit market.

Participants would earn credits for preventing, reducing or mitigating "greenhouse gas emissions or carbon sequestration." The credits could then be "bought or sold on a voluntary environmental credit market."

The bill, which passed 92-8 in the Senate, would also create a Greenhouse Gas Technical Assistance Provider and a Third-Party Verifier Certification Program Advisory Council.

U.S. Sen. John Boozman, R-Ark., one of the original co-sponsors, voted yes, as did U.S. Sen. Tom Cotton, a Republican from Little Rock.

Boozman, the ranking Republican on the Senate Agriculture Committee, backed the bill after ensuring that the program would be completely voluntary and that farmers, ranchers and private forest landowners would hold a majority of seats on the advisory council.

The Congressional Budget Office estimates the legislation would have a budgetary impact of $1 million per year.

"This is a simple step. It's a very common sense solution. I think it's something that will be of value to not only the air and water quality and all those kinds of things but also be a value to the farmers as they monetize these really good practices that they're doing and are capable of doing even more so," Boozman said.

Asked whether the world is warming and whether human activity is a contributing factor, the lawmaker from Rogers said: "This really doesn't have anything to do with that. What this is all about is making the planet cleaner and a better place to live. Do humans contribute? Yes. The question is how much and what do you do about it. And those are big questions that scientists and Congress and people are going to have to figure out as we go forward."

According to the National Oceanic and Atmospheric Administration, 2020 was the second-warmest year in recorded history. In the Northern Hemisphere, the average temperature was 2.3 degrees Fahrenheit higher than the 20th-century average, officials said.

Other agencies have come up with slightly different calculations -- NASA, for example, estimates that global average surface temperatures in 2020 equaled the record-high temperatures set in 2016.

Nonetheless, the agencies agree that the overall temperature trend is upward; the past seven years were the warmest on record, both organizations say.

As a private citizen, and later as president, Donald Trump repeatedly referred to global warming as "a hoax."

Eventually, he acknowledged that climate change was real, but he portrayed it as a temporary phenomenon that might not have human origins.

"I think something's happening. Something's changing, and it'll change back again," Trump said on CBS' "60 Minutes" in an October 2018 interview. "I don't think it's a hoax. I think there's probably a difference. But I don't know that it's man-made."

Westerman, an engineer with a master's degree in forestry from Yale University, said the data points to human involvement.

"Since the beginning of the Industrial Revolution, we've put about 300 gigatons of carbon in the atmosphere," he said.

That's 300 billion tons of carbon -- roughly 39 tons for every man, woman and child on earth.

Much of that pollution remains airborne.

"We believe that there are conservative solutions to a cleaner, safer, healthier environment," he said.

"We also believe that we can have a strong economy and a healthy environment at the same time, that the two definitely aren't mutually exclusive and they actually go hand in hand," he said.

Westerman said he doesn't know what the consequences will be if global warming isn't addressed.

"You could ask that same question [about] what's going to happen if we don't keep good air quality or good water quality. Obviously there could be health and environmental concerns with that, so we should work to be the best stewards of the things we have," he said.

"You've also got to ask ... if we totally gut our energy policy and make it unreliable and unaffordable, what are the long-term consequences of that? How negatively is that going to impact the quality of life for Americans?" Westerman said. "We've got to find that balance where we're producing reliable, low-cost clean energy and, at the same time, being good stewards of the environment."

Other caucus members, including Hill, are also stressing the need for a balanced approach.

"I'm looking forward to working with this caucus and my colleagues to enact conservative climate policies that utilize common sense, the free market, and technological innovation to reduce emissions and don't limit our energy choices," Hill said.

Environmental activists say they're glad to see global warming is on Congress' agenda.

"That, in and of itself, shows people in Congress can work together," she said.

Members of Citizens' Climate Lobby, a nonpartisan, nonprofit environmental group, had met with Boozman at least four times to voice support for the measure, the organization said.

In 2009, the first year of Barack Obama's presidency, the House of Representatives passed legislation to sharply reduce greenhouse gas emissions.

Forty-four Democrats, including then-U.S. Reps. Marion Berry of Gillett and Mike Ross of Prescott, voted no.

Since then, there's been little movement on the issue.

Temperatures -- and water levels -- have continued to rise.

Twelve years after that vote, Snyder said it's important for lawmakers to confront the problem.

"It is impossible to ignore the impact heat trapping greenhouse gases have on our lives. Stronger and more frequent storms, drought, fire, water shortages, hotter temperatures, heat related illness," he said in a text message.

"Today, tomorrow and in the years to come leaders must lead," he said. "Some actions will be baby steps. Some will be giant steps, but we must together meet this challenge."

She also spoke positively about the new conservative climate caucus.

"It's always a good thing when more leaders across the political spectrum are involved in seeking solutions to the threat of climate change," she said in a written statement.

"[T]here has been some bipartisan progress recently, particularly on agriculture and cleaning up abandoned oil and gas wells. I'm hoping we can build on that momentum toward stronger and more ambitious bipartisan progress," she said.

"We are in a moment that requires boldness. So we welcome every constructive voice to this debate, and we must act quickly to advance policies that reduce emissions and move us toward a clean energy economy," she added.