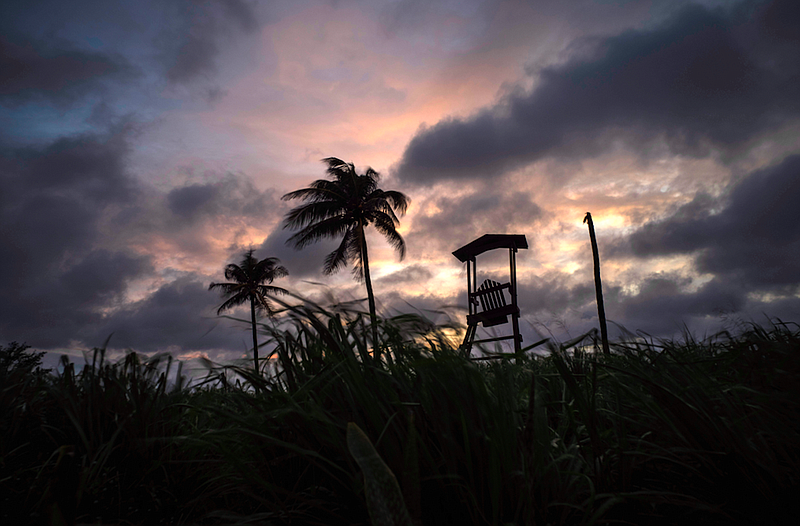 Wind moves the grass and palm trees under a cloudy sky after the passage of Tropical Storm Elsa in Havana, Cuba, Monday, July 5, 2021. (AP/Ramon Espinosa)

ST. PETERSBURG, Fla. — The National Hurricane Center says Tropical Storm Elsa is strengthening and could became a hurricane before making landfall along Florida's northern Gulf coast. The storm has already complicated the search for survivors in the collapse of a Miami-area condominium 12 days ago.

In addition to damaging winds and heavy rains, the Miami-based U.S. National Hurricane Center warned of life-threatening storm surges, flooding and isolated tornadoes. A hurricane warning has been issued for a long stretch of coastline, from Egmont Key at the mouth of Tampa Bay to the Steinhatchee River in Florida's Big Bend area.

"Although the environment is not conducive for significant strengthening before landfall, only a slight increase in intensity would result in Elsa becoming a hurricane" Tuesday night or early Wednesday, the National Hurricane Center said in its 2 p.m. advisory.

The Tampa area is highly vulnerable to storm surge because the offshore waters and Tampa Bay are quite shallow, experts say.

But on the barrier island beach towns along the Gulf Coast, it was largely business as usual with few shutters or plywood boards going up. Free sandbags were being handed out at several locations, and a limited number of storm shelters opened Tuesday morning in at least four counties around the Tampa Bay area, although no evacuations have been ordered.

Nancy Brindley, 85, who lives in a seaside house built in 1923, said she has experienced 34 previous tropical cyclones and is not having shutters put on her windows. Her main concern is what will happen to sand on the adjacent beach and the dunes that protect her house and others. She's staying through the storm.

"The main concern here is, if it doesn't speed up and decides to stall, there will be enormous erosion," she said.

Friends Chris Wirtz, 47, and Brendan Peregrine, 44, were staying put at a beachfront inn with their families. Both are from Tampa, about 25 miles across the bay and have been through storms many times.

"Before we left, we knew it was coming," Wirtz said.

Peregrine said the two families had been coming to the Pinellas County beach for 10 years. He noted they have ample supplies and a charcoal grill to cook on if the power goes out.

"We can hunker down for days," Peregrine said.

Still, some people were taking no chances. Annie Jones, 51, has lived along the Gulf Coast her entire life. She was buying ice and food at a local grocery store in advance of the storm.

""I've seen this happen over the years and I decided to load up," Jones said. "I thought it's best to beat the crowd. My vision is to be prepared."

Across the Tampa Bay region that's home to about 3.5 million people, events, government offices and schools were closing down early Tuesday in advance of the storm.

The Tampa Bay Rays game against Cleveland was postponed until a doubleheader on Wednesday, the team announced. Most schools, in their summer terms, will be closed through Wednesday, and attractions such as Zoo Tampa and several museums were closing early.

Bands of rain were expected to reach Surfside on Florida's Atlantic coast, soaking the rubble of the Champlain Towers South, which collapsed June 24, killing at least 32 people. Search and rescue crews have worked through rain in search of more than 100 others listed as missing, but must pause when lightning threatens, and a garage area in the pancaked debris already filled with water Monday, officials said.

Elsa's maximum sustained winds stood at 70 mph early Tuesday. A slow strengthening is forecast through Tuesday night and Elsa could be at hurricane strength before it makes landfall in Florida. Its core was about 95 miles northwest of Key West, Florida, and 180 miles south of Tampa. It was continuing to move to the north-northwest at 10 mph, according to the National Hurricane Center.

Florida Gov. Ron DeSantis expanded a state of emergency to cover a dozen counties where Elsa was expected to make a swift passage Wednesday.

Forecasters predicted Elsa would hit coastal Georgia and South Carolina after Florida. Georgia's coast was under a tropical storm watch, as was much of the South Carolina coast. Forecasters said tornadoes could strike in the eastern Carolinas and Virginia as Elsa moves north.

The storm surge could reach 5 feet over normally dry land in the Tampa Bay area if Elsa passes at high tide, forecasters said.

Tampa International Airport planned to shut down Tuesday at 5 p.m.

Elsa's westward shift spared the lower Florida Keys a direct hit, but the islands were still getting plenty of rain and wind Tuesday. Tropical storm warnings were posted for the Florida Keys from Craig Key westward to the Dry Tortugas and for the west coast of Florida from Flamingo northward to the Ochlockonee River.

Elsa is the earliest fifth-named storm on record, said Brian McNoldy, a hurricane researcher at the University of Miami.

This story has been updated. It was originally published at 12:25 p.m.