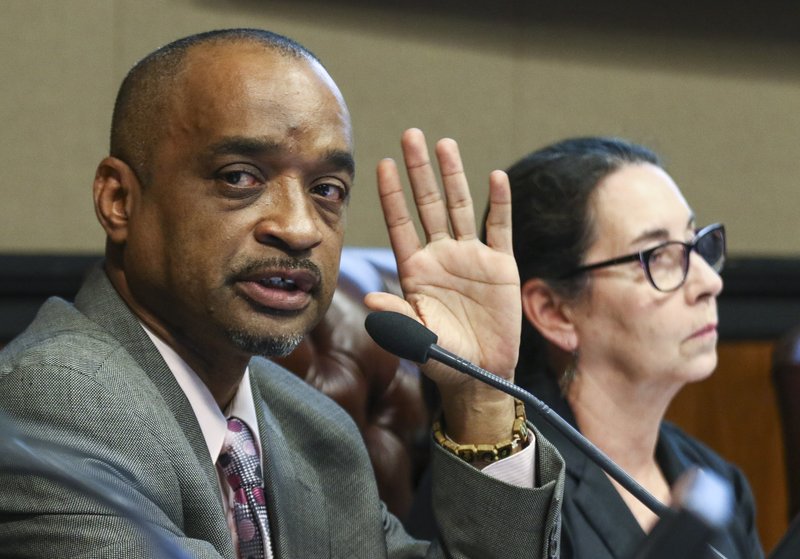 City Director Ken Richardson is shown in this file photo.

Little Rock City Director Ken Richardson last month filed a lawsuit against the city, Police Chief Keith Humphrey and a police officer over a 2019 encounter in which Richardson was handcuffed and cited for obstructing governmental operations.

The lawsuit names Alexander Sullivan, the officer who detained Richardson after the city director approached and photographed him while Sullivan was dealing with another individual in handcuffs.

Humphrey, the city and Sullivan -- or their representatives -- were served with the complaint last week, court records show.

On Oct. 9, 2019, Richardson approached Sullivan in an alley off Colonel Glenn Road as the officer was engaged with a robbery suspect.

The person was handcuffed in front of a police vehicle, according to dashboard-camera video of the incident.

In the video, Sullivan instructs Richardson to leave, several times in quick succession, and then tells him to place his hands behind his back.

The dashboard camera captured only audio of the exchange that occurred immediately before Richardson's detention because Sullivan and the city director were not standing in view of the camera.

Richardson was handcuffed and detained for about 30 minutes. He was then issued a criminal citation and released. The city director later pleaded innocent to the charge.

At the time, Little Rock police spokesman Eric Barnes said an internal investigation of Sullivan was underway, the Arkansas Democrat-Gazette reported in October 2019.

Prosecutors ultimately dropped the charge against Richardson under an order of nolle prosequi in January 2020.

Richardson, who represents Ward 2, told a Democrat-Gazette reporter to contact his attorney when reached for comment by text message Tuesday.

The city director is represented in the suit by Little Rock attorney Willard Proctor Jr. An attempt to reach Proctor on his office phone Tuesday evening was unsuccessful.

According to the complaint filed June 5 in Pulaski County Circuit Court, Richardson was getting gas at Kroger when he observed the officer detaining a Black man between the grocery store and a nearby apartment complex.

Richardson drove from the Kroger to get closer to the officer and the detained man, and he stopped in his car to observe what was happening, the complaint states.

He took three photos with his iPhone while seated in his car before Sullivan approached him, and then Richardson exited his vehicle, according to the complaint.

Richardson refused to leave when Sullivan instructed him to do so, according to the complaint.

Additionally, with regard to Humphrey and the city, the lawsuit argues that the police chief and Little Rock have allowed a custom that permits acts of excessive force by police officers. The complaint ties the practice to the city and the chief covering up allegations or performing "meaningless" internal investigations.

The complaint asks for compensatory and punitive damages as well as injunctive and declaratory relief.

When reached by email Tuesday and asked for comment on the lawsuit, police spokesman Mark Edwards wrote, "At this time, we have no response."

Edwards confirmed that Sullivan remains employed with the Little Rock Police Department and said he is a sergeant.

In response to a request by the Democrat-Gazette, City Attorney Tom Carpenter provided a copy of an email he sent to Mayor Frank Scott Jr. and members of the city's Board of Directors on Tuesday morning alerting them to the lawsuit.

Richardson was among the recipients of Carpenter's email.

"This email is simply an alert. There are a number of issues that will be discussed with the Board at a later time. Please let me know if you have any questions," Carpenter wrote.

When asked how the lawsuit will affect Richardson's ability to participate in board discussions, Carpenter suggested it would have no effect on his ability to vote on matters before the board.