Fayetteville council continues Board of Health operation, adds to scope of duties 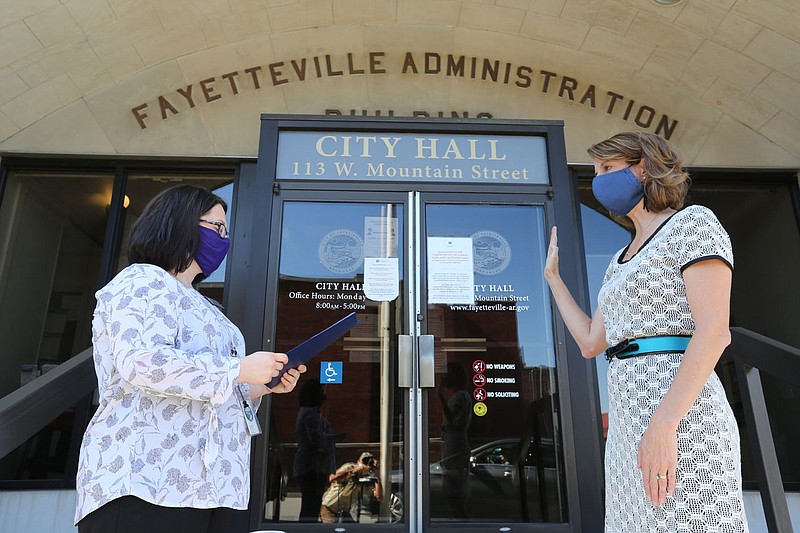 Kara Paxton (left), Fayetteville city clerk, administers the oath of office on July 24, 2020, to Dr. Marti Sharkey as the city's public health officer on the steps of City Hall in Fayetteville. The City Council on Tuesday voted to continue operation of the city's Board of Health. (File photo/NWA Democrat-Gazette/David Gottschalk)

FAYETTEVILLE -- The second iteration of the city's Board of Health will continue with a broader purpose, this time without a time limit attached.

The City Council voted 7-0 Tuesday to continue operation of the board and the volunteer city public health officer position. The council resurrected the board in June last year at the onset of the covid-19 pandemic, after dissolving it in 2018 for a lack of items to discuss.

Last year's resolution included a provision for the council to review whether it should dissolve, reconstitute or repurpose the board within four weeks of the state emergency declaration ending. The declaration related to the pandemic expired in May.

State law allows cities to create their own boards of health to "secure the city and its inhabitants from the evils of contagious, malignant and infectious diseases." The board has since met regularly with the appointed public health officer, Dr. Marti Sharkey, who has carried out various efforts such as messaging, advocacy and data tracking during the pandemic.

Sharkey said she hopes to develop a pandemic plan for the city to better prepare for the next major event. The pandemic also has brought long-term health ramifications to residents, including mental health issues, diabetes, obesity, an increase in drug and alcohol use and sexually transmitted diseases that need to be addressed, she said.

"We need money to address all of this," Sharkey said.

Council Member D'Andre Jones introduced an amendment to increase the board's scope of duties. A new section requests the board and the public health officer apply their expertise to improving equitable health outcomes for underserved populations. The section asks for eventual recommendations.

Jones said his amendment applies beyond the impact of covid-19.

"It's based on any population that has historically dealt with health disparities," he said.

A Tuesday news release from Martine Pollard with Northwest Arkansas Health Providers said there were 36 patients in the covid-19 units of area hospitals, the vast majority of whom were unvaccinated. There were 140 new cases in Benton and Washington counties from Friday to Tuesday, the release states.

The Centers for Disease Control and Prevention estimates the highly contagious delta variant is now the dominant strain in the United States, according to National Public Radio.

Council Member Teresa Turk said the board is still needed to address a resurgence in covid-19 in the state.

"The board of health has served us very well as we continue to address some of these really serious issues, and also addressing inequities in health care," she said.

In other business, the council voted 7-0 to allow businesses to operate parklets in city-owned parking spaces or right of way. Council Member Sloan Scroggin was absent Tuesday.

Parklets are seating areas installed in city-owned spaces outside the doors of restaurants and bars, mostly downtown. There are such installations in front of Plomo Quesadillas, 21st Amendment and TheatreSquared, for example.

The council voted to streamline the process for parklets last year as a way for businesses to gain revenue with outdoor seating during the pandemic. The measure the council passed Tuesday keeps the process in place permanently but strikes an emergency provision waiving the fees associated with a permit.

Jerry Davis, general manager for a number of downtown businesses including 21st Amendment and Los Lobos, said the parklets succeeded in bringing an increase in revenue. People use them even when the businesses that built them are closed, he said.

"These parklets are a great attraction for Dickson Street itself," Davis said.

• Rezoning about a third of an acre on South College Avenue across from Walker Park for smaller housing.

• Rezoning about 7 acres southeast of Ray Avenue and Huntsville Road as an agricultural zone to provide a natural area for wildlife and a grazing space for goats and horses.

• Rezoning 2 acres on Quality Lane, west of Gregg Avenue, for offices, classrooms, training and meeting space for individuals and families affected by disabilities.

• Rezoning half an acre north of Cato Springs Road, east of Garland Avenue, for neighborhood services.