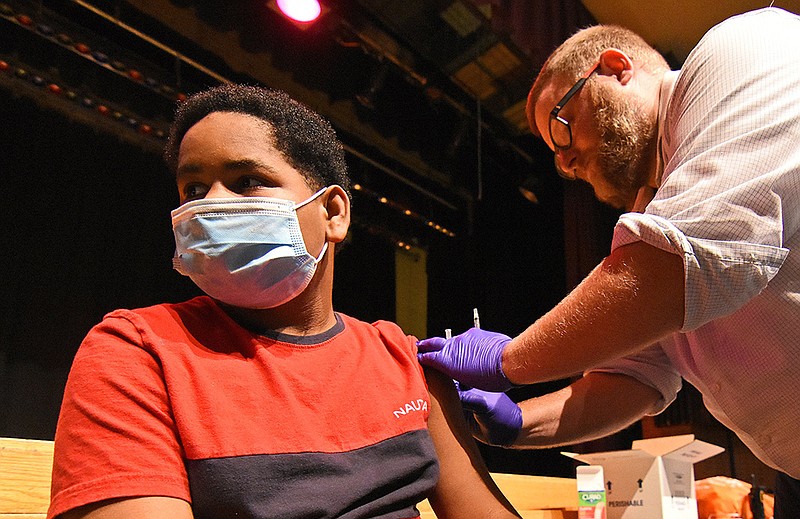 The number of patients hospitalized with covid-19 in Arkansas jumped Tuesday by 55, to 416, the largest one-day increase since January.

Fifteen more covid-19 patients were admitted into intensive care units, raising the total to 176, a week-to-week increase of 34 from the 142 reported the previous Tuesday.

Those patients requiring ventilators to breathe increased by 10, to 76 -- up seven from 69 a week ago.

The increases came the same day Hutchinson announced a statewide tour to talk directly with residents and address vaccine hesitancy.

[Video not showing up above? Click here to watch » https://www.youtube.com/watch?v=Jgk4MtfKvgA]

They also came as public health experts have been warning of a new mutation of the virus that is shown to be more contagious and cause more severe illness.

Health Secretary Dr. Jose Romero warned that it could be much worse.

"This is the most significant increase we've had really when we look at the fact that now we have vaccines to prevent this," Romero said.

Hutchinson pointed out that the lower case numbers are likely due to the Fourth of July holiday weekend, which meant less testing and reporting.

"We'll stay tuned for the rest of the week, but the hospitalizations obviously tell the story for today," Hutchinson said.

The same pattern is repeated for covid-19 deaths, with the average age for covid deaths going from 78 to 66.

"Hospitalizations and deaths are getting to a lower age because the higher age groups are getting vaccinated, and they're protected," Hutchinson said. "We've got a gap there that we need to work through."

Going straight to communities and enlisting the help of the state's employers is the latest strategy in the mission to increase vaccinations in the state, Hutchinson announced Tuesday.

The first phase of the two-part strategy will begin at 6 p.m. Thursday at the Veterans Park Event Center in Cabot, where Hutchinson's new "Community Covid Conversations" tour will kick off.

"It's a series of statewide community discussions surrounding covid-19 vaccine. It is to provide opportunities to Arkansans to ask questions, to get answers and simply to express concerns," Hutchinson said. "We want to hear from Arkansans as to what's happening in your community."

The goal is to engage communities at the local level and ask what more can be done to overcome vaccine hesitancy and to satisfy questions, Hutchinson said.

"The last thing that they need to have is the governor coming in and lecturing them, or even Dr. Romero," he said. "So the intent is to have a conversation where they can talk to us. We expect to have community leaders there. We want to listen."

The aim is to go out from the population centers into some of the rural areas as well as some of the areas that have low vaccination rates, Hutchinson said.

"It does come down to individual responsibility. That's the message. I'm the leader of this state, and I want to do all that I can," the governor said. "It would be easier for me to sit back and say, 'I'm weary of this covid conversation.' I'm sure everyone in this room is, but that's not leadership. It's saying: 'Let's plow on. Let's get through this. Let's see if we can do a little bit better.' We talk about individual responsibility, and we try to encourage that and individual decision-making."

The second step of the two-part strategy is enlisting employers in the state to encourage vaccinations in the workplace.

While employers were the first ones to push to get the vaccines, Hutchinson said he wants business leaders to "come back and reemphasize the need for vaccines in the workplace."

"First, I'm asking employers in Arkansas to give paid time off for workers to get vaccinated," Hutchinson said. "Secondly, to increase access to vaccines in the work place. If we need a clinic there, we'll make that available. If you need greater access and you want to have something at the workplace, we'll work with you to do that."

Next is asking employers to actively participate in engaging, informing and educating their employees on the benefits of the vaccines.

"We're not mandating anything," Hutchinson said. "We're asking for partners and help through the employer community."

Randy Zook, president and CEO of the Arkansas State Chamber of Commerce, said during Tuesday's news conference that the top reason employees give for not getting vaccinated is concern about the loss of income if they have a reaction to the shots and have to miss work.

"So many of our employers, especially our largest ones around the state, have taken steps to provide bonuses to employees for getting the shots as well as ensuring them that they'll get full pay for time off that results from taking the shots," Zook said. "We're encouraging all employers, not just the largest ones, all employers, to step back and put some extra effort into this push to get more and more employees vaccinated."

Zook also encouraged employers to take advantage of a provision in a federal relief law that allows a 100% tax credit for the cost of paid time off for a business with fewer than 500 employees.

The increase in case numbers and hospitalizations can, in part, be attributed to the rise of the delta variant in the state.

According to a weekly Health Department report, there are nine variants of the virus in the state, with the delta variant being the third-most-prevalent of the specimens sequenced.

About 7.2% of the Arkansas covid-19 specimens tested show the delta variant, compared with 2% nationwide.

"The delta variant itself is extremely transmissible. It is, on average, it is 30 to 50 times more transmissible than the alpha variant, which is the variant that came after the original strain," Romero said at the news conference. "It is very, very transmissible, and that's what makes it spread so quickly among the population."

Perhaps one of the most concerning aspects of the delta variant is that it is penetrating into the state's childhood population, Romero said.

"We cannot vaccinate our children at this point. We do not have a vaccine for them," Romero said. "The only way to protect them is to protect them by immunizing yourself and having a cocoon around them that doesn't allow the virus to reach them. Again, it's yet another reason for which to accept this vaccine and take them."

The good news, Hutchinson said, is that vaccination is effective against all the variants in the state, including the delta variant.

"It has a high level of effectiveness to prevent the actions of the delta variant even though it's more transmissible and more risky in terms of health outcomes," Hutchinson said.

Romero said it's important for people to know that those who have only received the first of the two-dose Pfizer or Moderna vaccine protocol are only 30% protected from the virus.

"All of the vaccines today have been shown to be protective against severe disease; that's disease that causes deaths and the majority of hospitalizations," Romero said.

Hutchinson said he's concerned about the virus's growth over the next two weeks after the Fourth of July holiday.

"I'm hopeful that they've been responsible over the holiday and that they'll continue to be responsible in getting the vaccine," Hutchinson said.

Hutchinson said on a nationally televised CNN interview Sunday that he was concerned about the state's future with the more powerful delta strain if the vaccination rate didn't improve, but he said that he didn't foresee a third surge on the horizon.

When asked Tuesday, Hutchinson said he would yield to the experts who have predicted another covid-19 surge.

Hutchinson congratulated Bradley County for being the first in the state to vaccinate more than 50% of its residents.

"We are having a number of other counties that are close to that," he said, adding that the state is "still a ways, again, from our goal" of vaccinating 50% of the state's population by July 30.

Pulaski County had the most new cases, 57, followed by Garland County with 28 and Craighead and Washington counties with 16 each.

The state's comprehensive tally of deaths since the pandemic reached Arkansas rose by six, to 5,926, on Tuesday.

The number of people who have ever been hospitalized in the state with covid-19 grew to 17,090.

The number of virus patients who have ever been on a ventilator rose to 1,735.