Deal with Siemens Mobility part of plan to replace oldest cars in fleet by LUZ LAZO THE WASHINGTON POST | July 8, 2021 at 1:53 a.m. 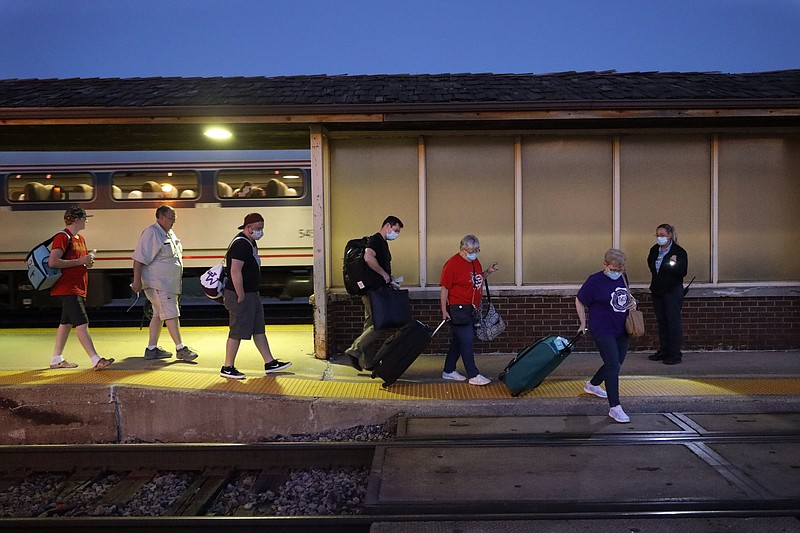 Passengers on the last Amtrak train of the day head to the station in Galesburg, Ill., last month. (AP/Shafkat Anowar)

Amtrak has signed a contract with the manufacturing company Siemens Mobility for 83 new train sets, part of a $7.3 billion plan to upgrade its rolling stock over the next decade.

Under the plan announced Wednesday, Amtrak will replace nearly 40% of its rail car fleet by 2031 and invest $2 billion in equipment upgrades systemwide. The oldest cars in Amtrak's fleet would be taken off the rails after five decades of service.

The deal marks one of the railroad's biggest investments in its 50 years of operation and comes as the company is pursuing a $75 billion expansion to put trains in dozens of cities and towns across the nation.

Amtrak officials said they hope to have the first of Siemens' Venture trains operating in 2024 and the entire new fleet in service in 2031, although funding has yet to be secured. Congress so far has authorized $200 million for the rail cars. Amtrak said it expects funding from transportation reauthorization and infrastructure bills being debated in Congress.

"This is really the next big piece of our transformational effort for intercity passenger rail across America," Amtrak President Stephen Gardner said in an interview. "It's a huge moment for Amtrak, and really the start of a whole new chapter in terms of Amtrak vehicles."

As part of the contract, California-based Siemens will provide Amtrak with technical support and maintenance for 20 years after delivery of the first train set.

Amtrak also is on track to replace its Acela fleet with 28 high-speed train sets from French manufacturer Alstom. Those trains, part of a $2.5 billion project, are expected to enter service next spring after delays caused by testing, as well as production and training interruptions during the coronavirus pandemic.

Amtrak's base contract with Siemens, worth $3.4 billion, calls for 73 multipowered train sets and the service agreement for Siemens to provide support, parts and materials. Railroad officials said another $1.5 billion would include an additional 10 train sets.

Some of the equipment being replaced was inherited when Amtrak began operations in 1971, and some was acquired in the 1970s. It includes the Amfleet I cars run on the Northeast Regional line stretching from Washington to Boston, as well as the 1960s Metroliner cab and the Cascades service cars in the Pacific Northwest.

The new equipment will be similar to Siemens Venture train sets in use on Florida's Brightline service, a privately run intercity train in the Miami area. The train sets are certified to operate at speeds up to 125 mph.

The trains, built with bidirectional capacities, will reduce turnaround times. Their dual-power engines -- electric and diesel -- will help reduce the time it takes for trains to transition from electrified to nonelectrified territory. The fleet will include diesel-only train sets for use on the West Coast, where tracks are not electrified, and some battery-diesel hybrid trains.

The trains will include remote monitoring and a digital diagnostics system expected to increase reliability. They will have more comfortable seating, individual power outlets and USB ports, onboard Wi-Fi, better lighting and panoramic windows.

The train sets will be manufactured at a Siemens facility in Sacramento, Calif.