TELEVISION: Elmo gets a puppy! A lesson in responsibility 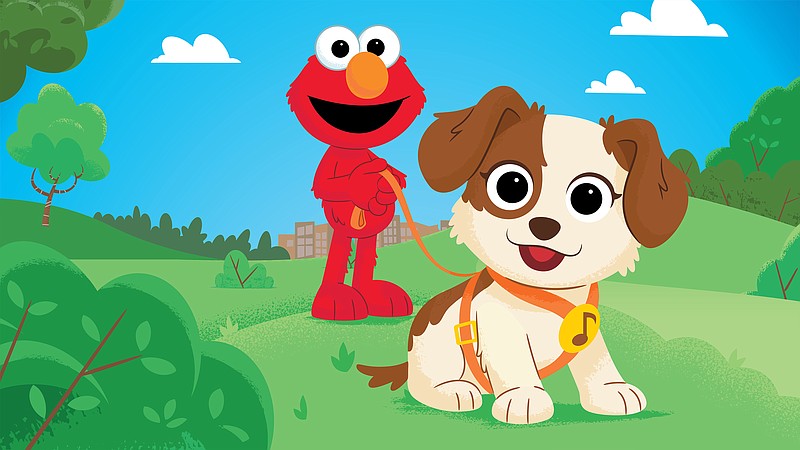 Tango the puppy joins Elmo and becomes part of the Sesame Street gang in the special "Furry Friends Forever: Elmo Gets a Puppy," debuting on HBO Max on Aug. 5. (Sesame Workshop via AP)

NEW YORK — "Sesame Street" is about to get a whole lot cuter.

Elmo, Grover, Abby Cadabby and the rest of the Muppet gang are introducing a new character to the show this summer — a white-and-brown puppy named Tango, The Associated Press has learned.

"We wanted to explore that special bond between children and pets by introducing this new character," said Kay Wilson Stallings, the executive vice president of creative and production at Sesame Workshop, the nonprofit behind "Sesame Street."

Tango will join "Sesame Street's" 52nd season as an animated character and a live-action Muppet, in episodes this fall on HBO Max and streaming on PBS KIDS in 2022.

The pup will be introduced in a 30-minute animated special "Furry Friends Forever: Elmo Gets a Puppy," debuting on HBO Max on Aug. 5. She's technically Elmo's second pet — he has been caring for goldfish Dorothy for several years.

"He's done quite well taking care of his goldfish," said Stallings. "We thought he's been successful with taking care of Dorothy and that this could be the next step in his development and his getting more responsibility and his learning and growing."

Plans to introduce a pet on Sesame Street predated the pandemic, when animal adoptions soared. Sesame Workshop hopes Tango leads to modeling of age-appropriate help with pets, their care and feeding.

"The timing of it is perfect. It was not like we decided six months ago 'Let's create this new character because a lot of people are adopting pandemic pets.' But we do know that a lot of families have been adopting pets during the pandemic as a source of comfort and joy," Stallings said.

"With Elmo adopting Tango, it's going to mirror for many of our children what they're experiencing now at home and help them understand how best to love and take care of their furry friends as well."

Details about Tango have been carefully considered, with internal discussions about what she should look like and what sex to pick. Stallings, who has a long-haired dachshund at home, put her own preferences aside for the common good.

"We decided that it would really be best to make sure that the way to have her most accessible and really appeal to as many kids and families as possible is just make her like a mixed breed," she said. "She could be a little of anything. Anybody who has a pet might see a little of their pet within Tango."

In the animated and song-filled film, Grover and Elmo go out during playtime and come across the friendly but sad, stray pup sitting forlornly in a cardboard box. She loves music and dancing and scratches under her chin.

Even Oscar the Grouch calls her a "cute, adorable little fluffball."

HOW TO MEET A DOG

Grover warns Elmo that whenever approaching a dog, move quietly and let them sniff the back of your hand. "This is how doggies get to know you. Or, should I say, nose you," Grover says.

Then the fuzzy monsters realize that the puppy is homeless. They decide a local pet fair is the perfect place to find her a new home.

"We will find you the home you deserve, little puppy," Grover says.

The pair also name the dog after the ballroom dance because that's what she loves to do. She dances the tango.

Along the way, Cookie Monster offers her dog treats, and Abby Cadabby cleans her off in a magical bubble bath, while singing, "It was fun to get dirty. Now hooray for getting clean." The songs are by Paul Buckley.

Finding the pet fair empty, Elmo comes to a realization.

"Elmo knows where Tango's home could be," he says.

Elmo responds: "With Elmo." But first he needs parental permission. Elmo promises to feed, play, bathe and take Tango for walks. "We don't need a pet fair to know we're a great pair," he sings.

The message: Let love take you in.

Tango will remain a puppy — just as Elmo will always be 3½-years-old — but Stallings said the dog's future as a recurring character is bright, with even the possibility of her own starring role someday.

First though, Stallings said, the creators are just focusing on the relationship between Tango and Elmo as she becomes more familiar with the rest of the characters on "Sesame Street."

"But if there are stories to be told and educational reasons to do so, we could potentially look at spinning off Tango into her own series," Stallings said.