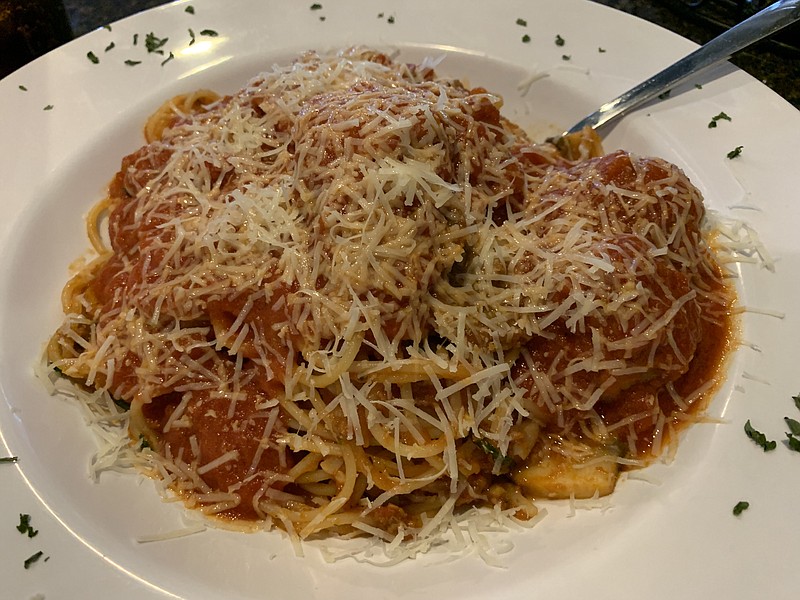 Unusual even for a high-profile new eatery — which Rivera Italian Restaurant, open for about a month in the former Layla's space at 4546 E. McCain Blvd., North Little Rock, is not — we had several readers and friends call to our attention and recommend.

Occupying the easternmost storefront in a tiny retail plaza, behind the Burger King and in front of the Walmart Supercenter, Rivera is not yet an all-out winner — we think it has what it takes to succeed (including a beer-and-wine license that took effect July 1), but there's still room for considerable improvement.

But any Italian restaurant where the spaghetti is al dente — firm to the tooth — starts out with extra credit in our book.

One big recommendation: if presented with a choice of Rivera's meat sauce or marinara, go with the meat sauce.

The prime example: Our lunch Lasagna ($7.99; for dinner, $10.95), served en casserole, plenty of ground beef and cheese around some flabby, overcooked noodles and well covered with an insipid marinara that desperately needs a big shot of garlic.

So does the Garlic Cheese Bread appetizer ($4.99), five baguette slices topped with melted mozzarella and, supposedly, garlic or garlic butter, but it barely registered, nor did we discern much, if any, in the ample portion of marinara dipping sauce.

So our expectations were low indeed for the Spaghetti Works ($14.95), pasta with meat sauce, meatballs, sausage and mushrooms, listed, not under "pasta" but under "House Specialties." But we got a wonderful surprise: The spaghetti was al dente, the meat sauce with a nice garlic kick (in large measure also absorbed by the mushroom chunks and slices, which were plentiful and huge. The sausage was pleasant but not overly impressive. The meatballs, however, met our meager expectations: They were small and spongy.

We had a mixed reaction to our Veal Marsala ($18.95). On the one hand, the two good-size scallops of veal, though cut a little thick, were still quite tender, and there were plenty of mushroom slices, all served over al dente spaghetti. However, the rich brown gravy in which it was pan-sauteed, while flavorful, tasted more of black pepper than Marsala, of which we'd say there was only a bare hint.

The Mozzarella Caprese ($8.99), ample portions of sliced fresh mozzarella and sliced fresh tomatoes, is a perfect appetizer (or light entree) to order in June, when you know the tomatoes will be fresh and tasty. There was only enough fresh basil and balsamic vinegar for accent but not for flavor — the plate presentation was lovely and it was filling, but not particularly flavorful.

Entrees come with knot-shaped rolls and choice of side salad or soup. The former is leafy lettuce with a couple of fresh plum tomatoes, a cucumber slice or two and a handful of commercial croutons; there's enough of the house dressing, a thick and fairly tasty tomato vinaigrette served in a side cup, to give the lettuce a good coating without getting too watered down or accumulating at the bottom of the bowl. Our creamy mushroom soup was tasty and nicely seasoned but our personal preference is for larger chunks of mushrooms. 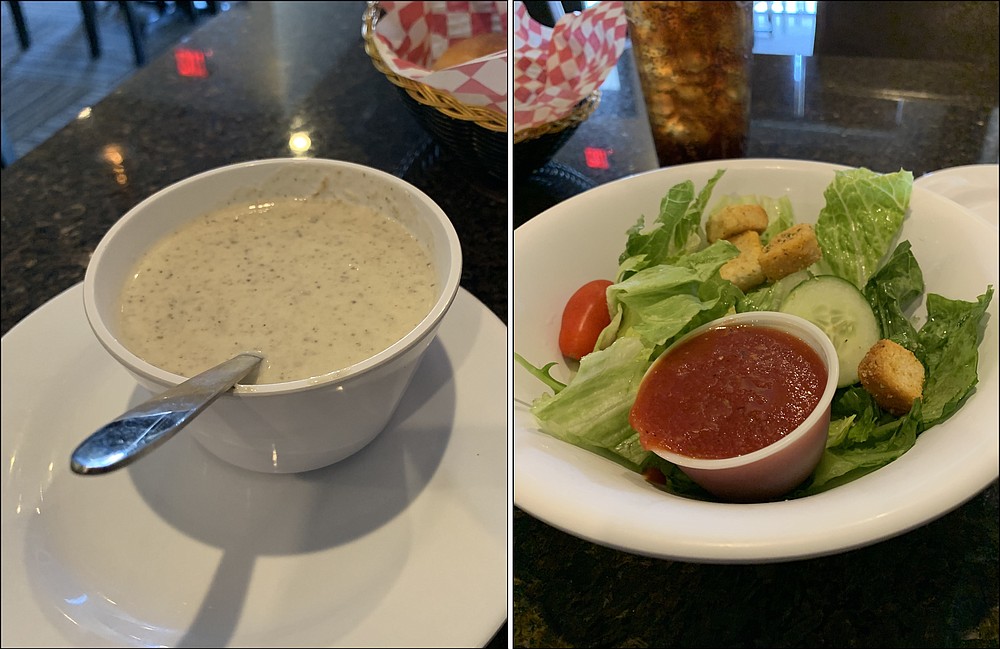 Entrees at Rivera come with choice of soup (a creamy mushroom on one recent occasion) or salad (the house dressing is a tomato vinaigrette). (Arkansas Democrat-Gazette/Eric E. Harrison)

Service was pretty good on the whole; unlike most places at the moment, the family-owned establishment is not short-handed either in the kitchen or on the floor.

Rivera has about a dozen tables with seating for about four dozen at "granite-oid" topped tables and sturdy comfortable brown leatherette upholstered chairs. The place is dimly lighted, especially at lunch when you'd expect more light from the many windows. Quasi-wood-paneling extends halfway up the walls. A single piece of wine bottle art presaged the arrival of the wine/beer license; there's a painting of a Venetian scene on the back wall.

Drive-thru customers at the Burger King can complicate the traffic flow. Parking is less limited, however, than it appears — there are additional spaces on the side.