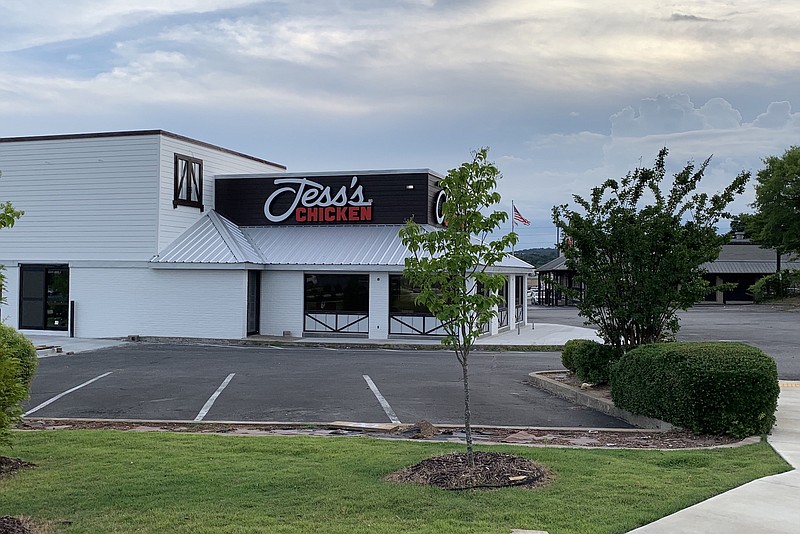 THURSDAY UPDATE: The Root will reopen Saturday instead of the target date of Friday, the restaurant posted on Facebook.

We now have a September opening target for Jess’s Chicken, 10907 N. Rodney Parham Road, Little Rock, in what for three decades had been Black Angus (forced to decamp in March 2020, thereafter moving back to its previous home, West Markham and Van Buren streets). The menu will feature chicken, of course, including fried chicken, nuggets, chicken salad and chicken sandwiches, plus hand-cut fries — not surprising, since, as we previously reported, Jess’s comes from the Bubbus family, the same folks who serve hand-cut fries at David’s Burgers. The exterior is basically complete; the interior, not so much. Other “nuggets” we’ve discovered: A company spokesman says it’ll have a three-lane drive-thru (as was the case with Black Angus, they’re anticipating drive-thru customers will provide a significant portion of their business) and that, as with David’s Burgers, it will operate Monday-Saturday and close Sunday.

The Root, 1500 Main St., Little Rock, which has been operating on to-go business for more than a year, reopens in full on Saturday. The place has been closed since Sunday “to get the restaurant back into shape,” according to a Facebook post. Hours will return to 8 a.m.-8 p.m. Tuesday-Sunday. The phone number is (501) 414-0423; the website is therootcafe.com.

Meanwhile, an eagle-eyed reader reports spotting work going on at the Canon Grill, 2811 Kavanaugh Blvd. in Little Rock’s Hillcrest; which has been “closed temporarily” since April 2020. Doubts about how temporary that closure might be can be partially alleviated by noting that the phone number, (501) 664-2068, is still in service and has not been disconnected, and you can still access its website, canongrill.net.

A mock-up of the Mulekick sign on the exterior of the former Griffin Restaurant in El Dorado's Murphy Arts District accompanies the announcement that the Magnolia restaurant is planning an El Dorado "branch." (Special to the Democrat-Gazette)

Magnolia restaurant MuleKick is taking over the former Griffin Restaurant, 101 E. Locust St. in a 1920s automotive building in El Dorado’s Murphy Arts District. It will be called MuleKick@MAD, with a target opening set for mid-September. It will follow the Magnolia menu’s focus on “next level pizza, wings and locally sourced craft beer selection,” according to a news release. MuleKick’s Christy Ouei explains that her kitchen makes its own pizza dough, tosses it by hand and makes its pies with special recipes, and that eventually the El Dorado menu could include seasonal entrees and unique appetizers, and offer Sunday brunch. The new restaurant will also feature live music several times a week, plus trivia nights “and more,” according to the news release. Remodeling plans will turn the more formal Griffin Restaurant into a “laid-back, hip space,” including fire pits outside along Locust Street. The plan also involves expanding the interior to allow for more seating and private dining options. Griffin closed in March 2020 due to the covid-19 pandemic. Ouei says they’ll be hiring servers, concessionaires, hosted-events staff, kitchen staff and bartenders via a job fair July 16-17 in the Murphy Arts District. Visit mulekickatmad.com.

Jones’ Bar-B-Que Diner in Marianna, which reopened May 20 after a February fire destroyed the wooden barbecue pit structure and damaged the 1964-vintage diner building, will hold a grand re-opening at 11 a.m. Wednesday. The event will, among other things, show off the new metal building around the barbecue pit, paid for with online fundraisers that brought in more than $87,000 to help with the restoration and construction, and a $25,000 emergency grant from Southern Restaurants for Racial Justice. The James Beard Foundation, which gave the diner an America’s Classics award in 2012, calls it “one of the oldest African-American-owned restaurants in America”; it has been in the Jones family since 1910 and current owner-pitmaster-legend James “Harold” Jones, 76, says he was 14 years old when he started working there. Jones is hosting the event to thank the community for support and encouragement, according to a news release from The Venture Group; speakers will include Jones; Steve Higginbothom, a former state senator from Marianna; Rex Nelson, senior editor of the Arkansas Democrat-Gazette; and Wayne Miller, executive director of The Venture Center in Little Rock. It’ll be open to the public, and yes, barbecue will be served.

An outlet of Jersey Mike’s Subs was set to open Wednesday at 7022 W. Sunset Ave., Springdale, with a grand opening and fundraiser for Junior Achievement of Arkansas through Sunday. Customers with a special coupon can make a minimum $2 contribution to the nonprofit in exchange for a regular sub. Hours are 10 a.m.-9 p.m. daily. The phone number is (479) 334-6005. Franchisee Nick Morgan also owns locations in Bentonville and Rogers. And for those in Central Arkansas who see Jersey Mike’s commercials on the TV but for whom the drive to outlets in Conway or Benton may be still a long haul for a sandwich, a spokeswoman for the chain tells us, “Jersey Mike’s is actively looking for sites in Little Rock and is hoping to open one within the next year.” Visit jerseymikes.com.

And we suspected that the list of Central Arkansas nonchain Italian restaurants we ran last week would be missing at least one entry, and that our dedicated readers would so inform us, and we were right on both counts. The list missed Verona Italian Restaurant, 16925 Interstate 30, Benton. And several readers did, in fact, pitch in to let us know.