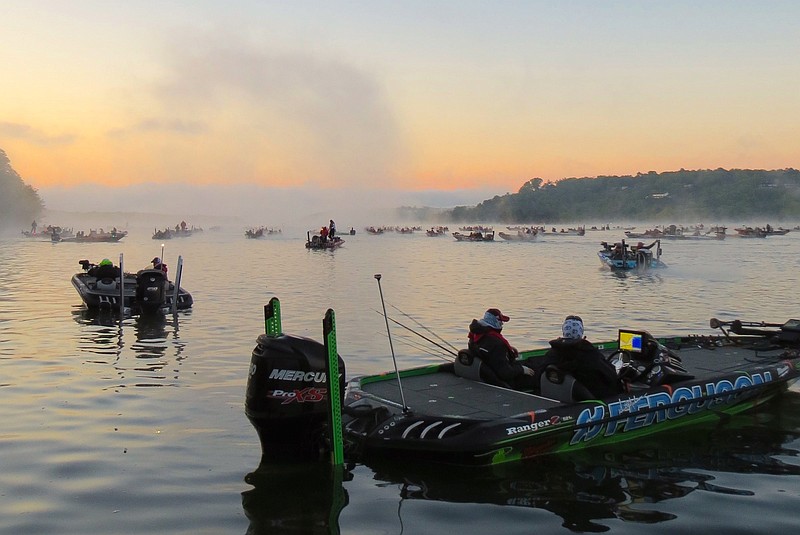 Catching bass in practice often does not translate to a good performance during bass tournaments. (Democrat-Gazette file photo)

After some 30 years of covering bass tournaments, I have grown accustomed to a familiar refrain that goes something like this.

An angler starts a tournament hot and then steadily fades out of contention and sometimes even out of the money. He found a hot pattern in practice, but it was ebbing when the tournament started. He was in contention, maybe even in the top five, at the end of the first day. On the second day, he slipped, and by the third day he dropped out of sight while somebody else shot high with an ascendant pattern.

It happens often enough that one could make a solid case that practicing before a tournament is counterproductive. I've seen enough examples from Costa Series, Toyota Series, All-Americans, Forrest Wood Cups and Bassmaster Classics to write a book.

"A lot of times it's too easy to hold onto something that worked in practice that clearly doesn't work when the tournament starts," Scudder said. "You can be stubborn and ride it to the bitter end, or you can adjust to what the actual conditions are at that moment."

For example, Scudder referred to a BFL tournament on Lake Dardanelle in May. His productive practice pattern didn't work during the tournament, and by midday, Scudder was looking at a crash-and-burn.

"My co-angler caught a sunfish," Scudder said. "That's when I realized that bream were up on the bank spawning."

Scudder tied on a red SPRO Rock Crawler crankbait and caught a good bass. He caught a 2.5-pounder about 50 yards later, followed by a 3-pounder. He caught five bass weighing 14 pounds, 4 ounces to tie for third place.

At the FLW Costa Central Region tournament at Lake Dardanelle in 2016, a pair of anglers struck gold fishing inundated grassbeds on the first day. By the third day, the water level fell and pulled the fish out of the grass in their area. They failed to adjust and plummeted in the standings.

At the FLW Costa regional championship at Lake Dardanelle in 2017, every pattern faded during the tournament, and every angler faced diminishing returns in a tournament of attrition. Quincy Houchin's pattern faded the least, mostly because he had an area to himself.

It happened again at the FLW Toyota Series tournament in September 2020, when Joe Bennett appeared to be riding an ascendant pattern that vanished on the last day.

In the last Forrest Wood Cup on Lake Hamilton in 2019, a few anglers banked on a pattern that depended on current from hydropower releases at Blakely Dam. It was a red-hot but sporadic pattern until the day there was no hydropower generation.

Probably the biggest mistake bass tournament anglers make is regarding practice as part of the tournament instead of a data-gathering exercise. For starters, the first day of practice is merely a baseline marker. If you catch 15 pounds on the first day of practice, that's merely one datum that doesn't mean a thing by itself. What happens on the next day of practice? Does your weight increase or decrease, and by how much? Does your catch rate go up or down? Does your catch total increase or decrease? What time does the highest concentration of bites occur, and how does that relate to the weather, water level, current and even moon phase? All of those variables illustrate whether a pattern is coming or going.

Sometimes, conventional patterns are reliable. In hot summer weather, for example, you can count on bass concentrating in and around deep brushpiles on deep reservoirs. Modern electronics have eliminated the trial-and-error process of finding the brushpiles that hold fish.

On the other hand, the brushpile pattern on Lake Ouachita failed spectacularly during an FLW Tour event in 2010. A handful of California anglers discovered that schools of big bass were feeding in shallow water almost all day in the heat and bright sunshine. That pattern held for the duration of the tournament, but I have not heard of it happening since.

Patterns should be consistent during the spawn, but there are multiple phases to the spawn. Are big female bass already on beds or have they already left? Are they spawning in stages, with a new cast of females moving shallow almost daily as they did in 2010 when Brandon Palaniuk won the Bassmaster Elite Series tournament on Bull Shoals Lake?

That pattern was not a factor when the Elites returned to Bull Shoals the following year.

After a Bassmaster Classic at Lake Guntersville, several top-10 finishers bemoaned patterns that died during the tournament. I asked all 10 if practicing is actually detrimental to tournament performance.

Jason Christie shrugged and said, "Maybe it does. I don't know. But we're fishermen. That's what we do. We fish."

Practice itself doesn't hurt or help. What matters is what an angler does with the information he gathers during practice. If you don't process that information accurately, you're better off entering a tournament cold.