A ban on fans: Tokyo-area Olympics venues will be empty 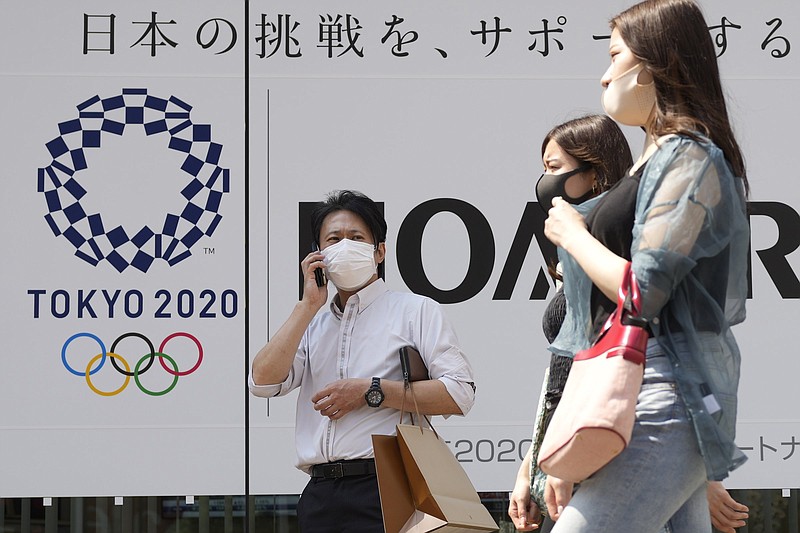 The Tokyo Olympics, scheduled to begin July 23, will now be a mostly TV-only event after officials announced Thursday that fans will not be allowed to attend events in the city’s arenas and stadiums after the Japanese government placed the city under a covid-19 state of emergency. (AP/Shuji Kajiyama)

TOKYO -- Fans will be banned from Tokyo-area stadiums and arenas when the Olympics begin in two weeks, the city's governor said Thursday after meeting with organizers of the pandemic-postponed games.

That means the Olympics will be a largely TV-only event, after the Japanese government put the capital under a covid-19 state of emergency because of rising new infections and the highly contagious delta variant.

It was a serious blow for Japanese taxpayers and local organizers of the games, which already had been postponed from 2020 by the coronavirus. Hundreds of millions of dollars in ticket revenue will be lost, and that must be made up by the government. Fans also have endured months of uncertainty about whether the Olympics will go ahead.

Fans from abroad were banned months ago, and the new measures will mean no spectators in stadiums and arenas around Tokyo -- both indoor and outdoor venues.

The ban covers Tokyo and three surrounding prefectures -- Kanagawa, Saitama and Chiba. A smattering of events in outlying areas, like baseball in the northeastern prefecture of Fukushima, will allow a limited number of fans.

The state of emergency begins Monday and runs through Aug. 22. The Olympics, which open July 23 and run through Aug. 8, fall entirely under the emergency period, while the Paralympics open Aug. 24.

"Taking into consideration the impact of the delta strain, and in order to prevent the resurgence of infections from spreading across the country, we need to step up virus prevention measures," Suga said.

In principle, the July 23 opening ceremony at the new $1.4 billion National Stadium will be without paying fans, although some dignitaries, sponsors, IOC officials and others will be allowed to attend.

"We will have to review the situation about the dignitaries and stakeholders," organizing committee President Seiko Hashimoto said of the opening ceremony.

"No fans was a very difficult decision," she added.

Hashimoto acknowledged some regrets, particularly about the decision coming so late.

"We had no choice but to arrive at the no-spectator decision," she said. "We postponed and postponed, one after another. I have done some soul-searching about that."

The emergency declaration made for a rude arrival for IOC President Thomas Bach, who landed Thursday in Tokyo for the games. He attended the virtual meeting on fans from his five-star hotel for IOC officials where he was self-isolating for three days.

"What can I say? Finally we are here," Bach said, sounding upbeat as he opened the late night meeting that ended close to midnight. "I have been longing for this day for more than one year."

Toshiro Muto, the CEO of the organizing committee, said many sponsors, federation officials and others would be considered to be "organizers" and thus would be allowed to attend venues. He said some might occupy public seating, but he said he did not know "the numerical details."

Organizers had expected to generate about $800 million in ticket sales. Any shortfall -- and it could be almost the entire amount -- will have to be made up by Japanese government entities.

Japan is officially spending $15.4 billion on the Olympics, and several government audits say it's much larger. All but $6.7 billion is public money.

Two weeks ago, organizers and the IOC allowed venues to be filled to 50% of capacity, with crowds not to exceed 10,000. The state of emergency forced the late turnaround, which was always an option if infections got worse.

On Thursday, Tokyo reported 896 new cases, up from 673 a week earlier. It's the 19th consecutive day that cases have topped the mark set seven days prior. New cases on Wednesday hit 920, the highest total since 1,010 were reported on May 13.

The rise in infections also has forced the Tokyo city government to pull the Olympic torch relay off the streets, allowing it only on remote islands off the capital's coast.

"The infections are in their expansion phase and everyone in this country must firmly understand the seriousness of it," said Dr. Shigeru Omi, a top government medical adviser.

The Olympics are pushing ahead against most medical advice, partially because the postponement stalled the IOC's income flow. It gets almost 75% from selling broadcast rights, and estimates suggest it would lose $3 billion to $4 billion if the Olympics were canceled altogether.

About 11,000 Olympians and 4,400 Paralympians are expected to enter Japan, along with tens of thousands of officials, judges, administrators, sponsors, broadcasters and media. The IOC said more than 80% of Olympic Village residents will be vaccinated. 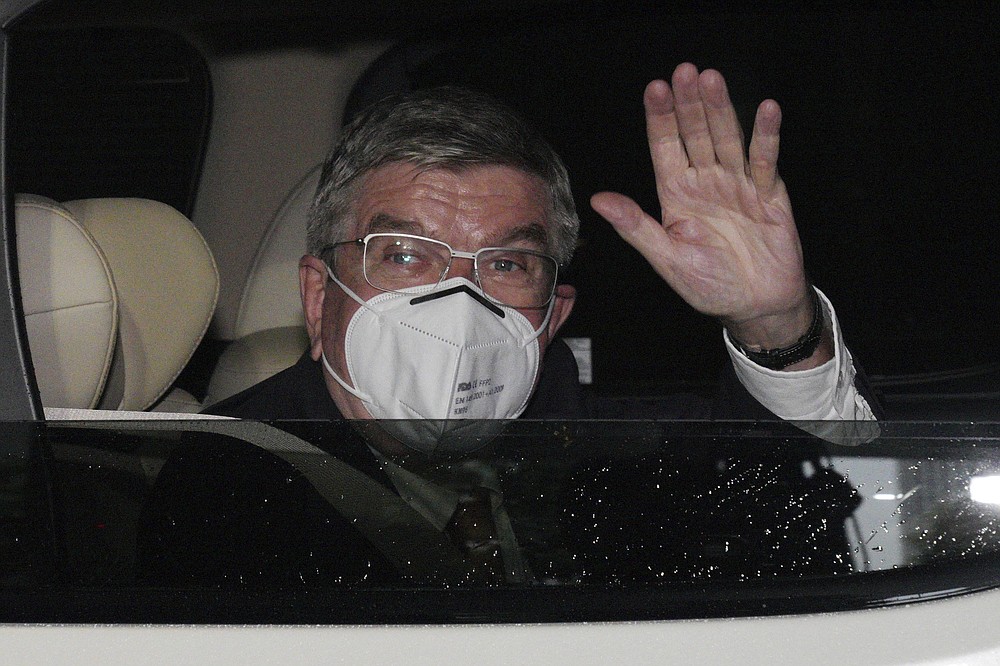 International Olympic Committee (IOC) President Thomas Bach waves from the vehicle to media upon his arrival an accommodation Thursday, July 8, 2021, in Tokyo. Bach arrived on Thursday, July 8, 2021, in Tokyo as Japan Prime Minister Yoshihde Suga was set to declare a state of emergency that is likely to result in a ban on fans from the Tokyo Olympics as coronavirus infections spread across the capital. (AP Photo/Eugene Hoshiko, Pool) 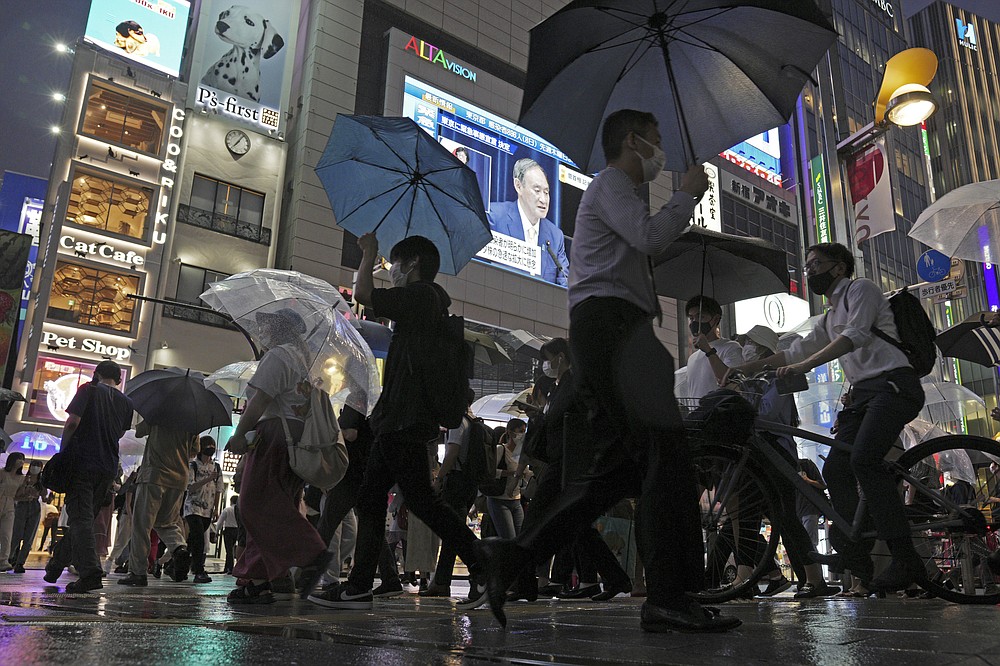 Pedestrians walk past a giant public TV with a live broadcast of a news conference by Japanese Prime Minister Yoshihide Suga after he announced a state of emergency because of rising coronavirus infections Thursday, July 8, 2021, in Tokyo. Suga said the state of emergency would go in effect on Monday and last through Aug. 22. This means the Olympics, opening on July 23 and running through Aug. 8, will be held entirely under emergency measures. The Paralympics open on Aug. 24. (AP Photo/Eugene Hoshiko) 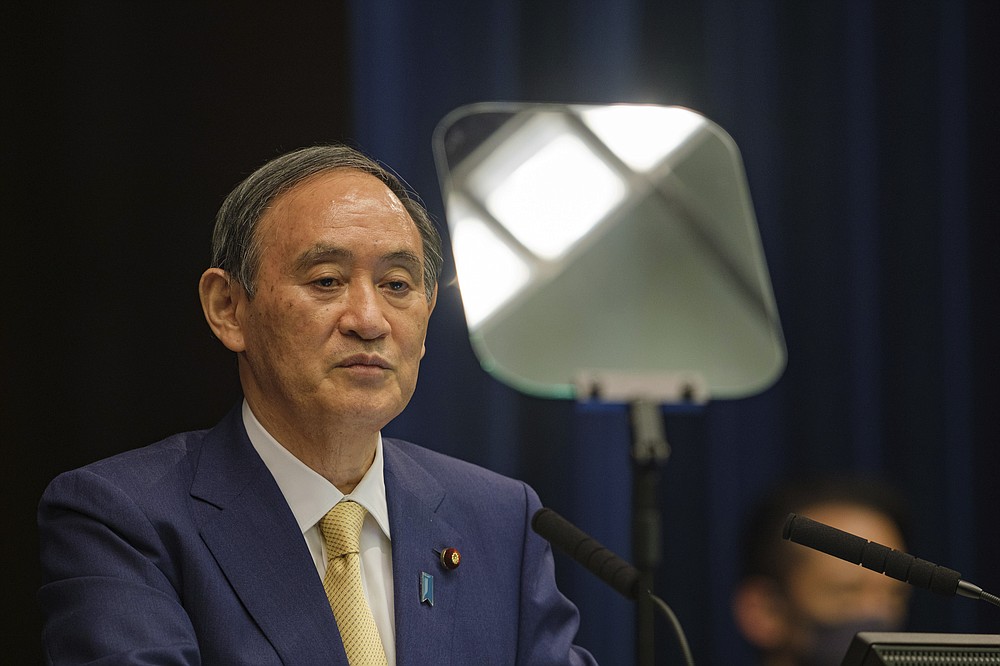 Japan's Prime Minister Yoshihide Suga speaks during a press conference at his official residence in Tokyo, Thursday, July 8, 2021. Suga declared the fourth state of emergency would go in effect on Monday and last through Aug. 22. This means the Olympics, opening on July 23 and running through Aug. 8, will be held entirely under emergency measures. (Nicolas Datiche/Pool Photo via AP) 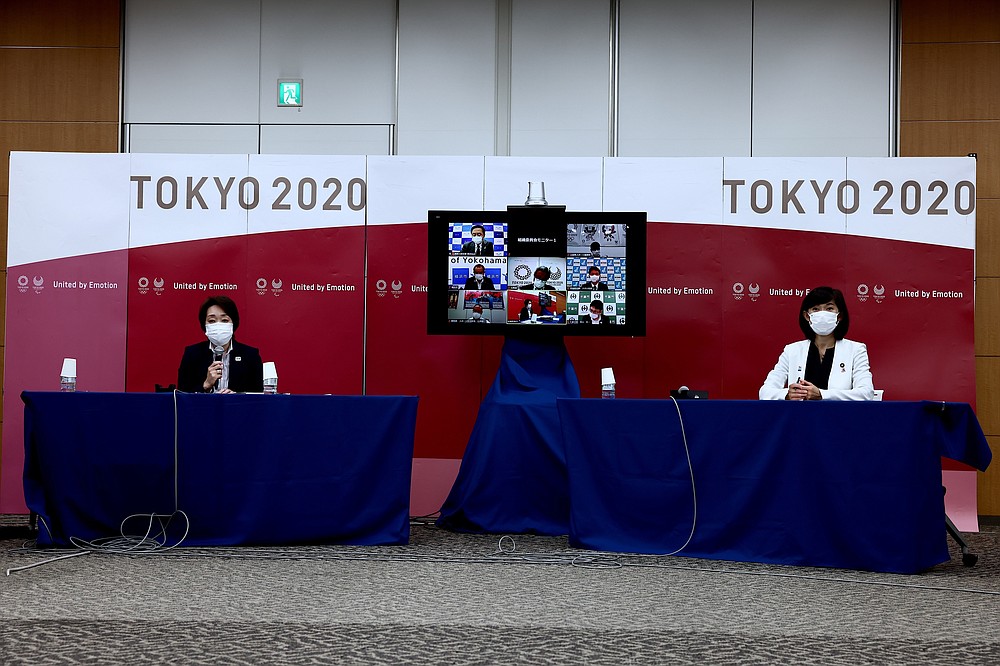 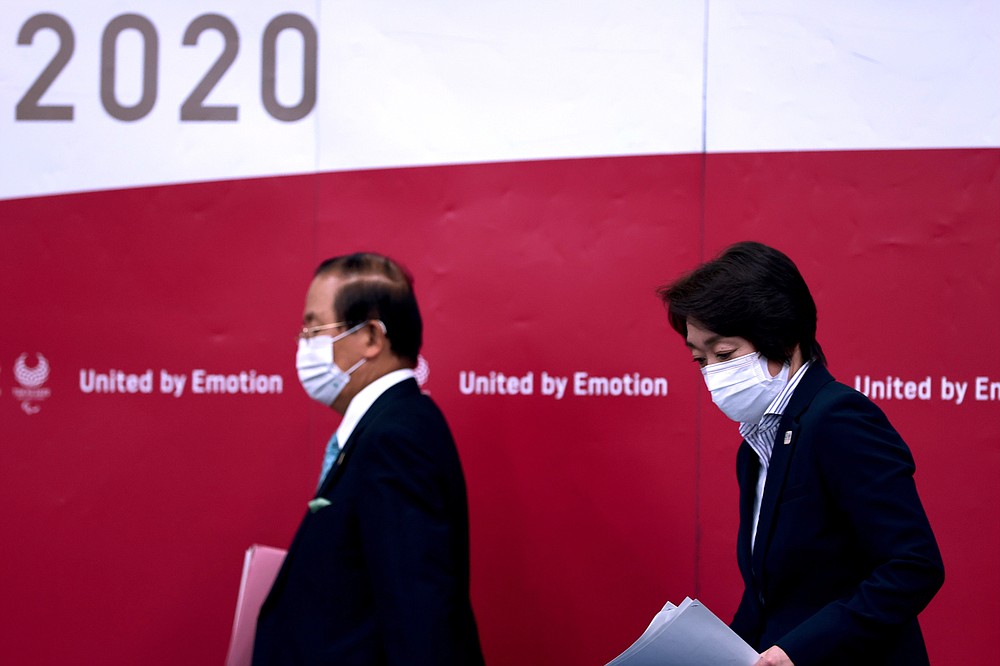 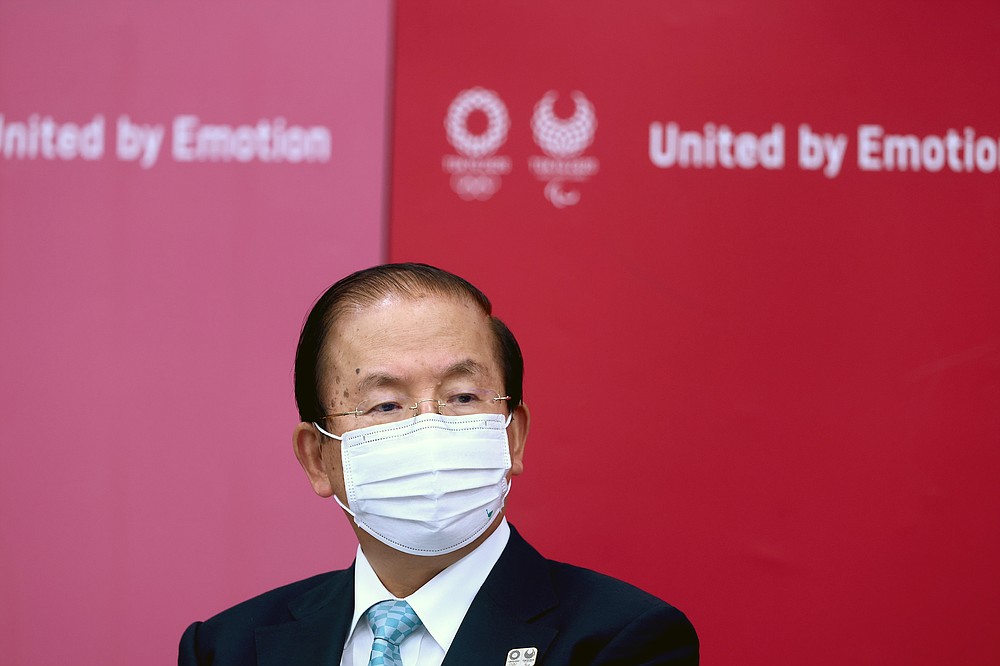 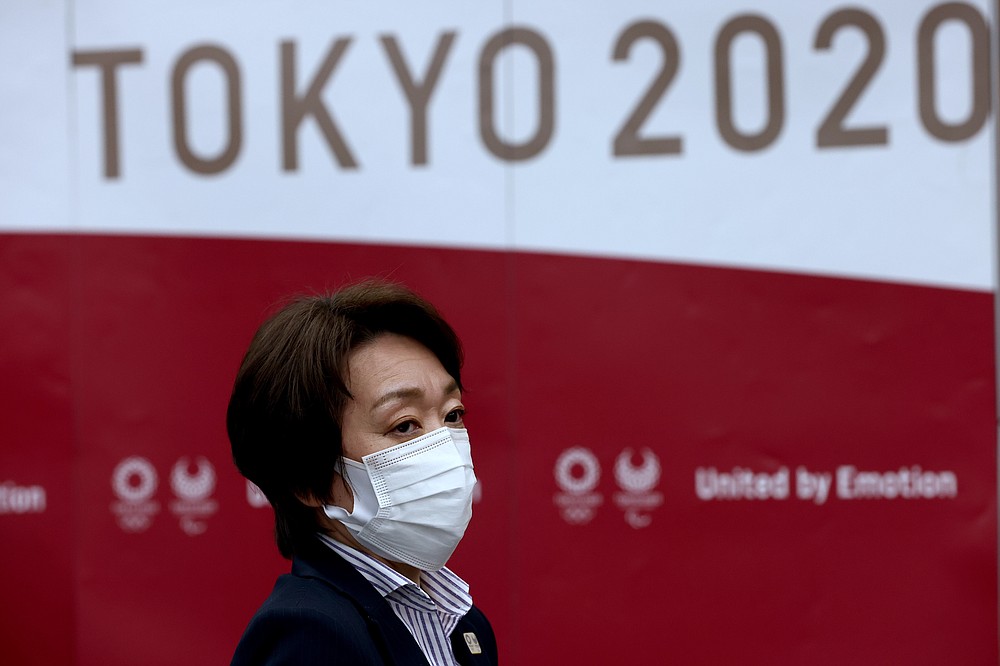 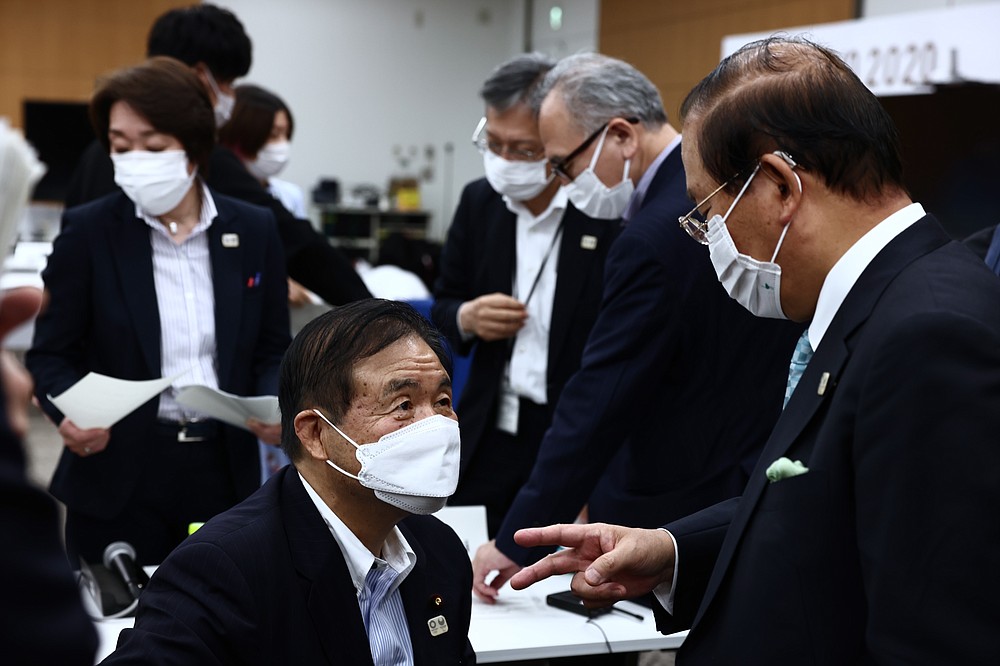 Print Headline: A ban on fans