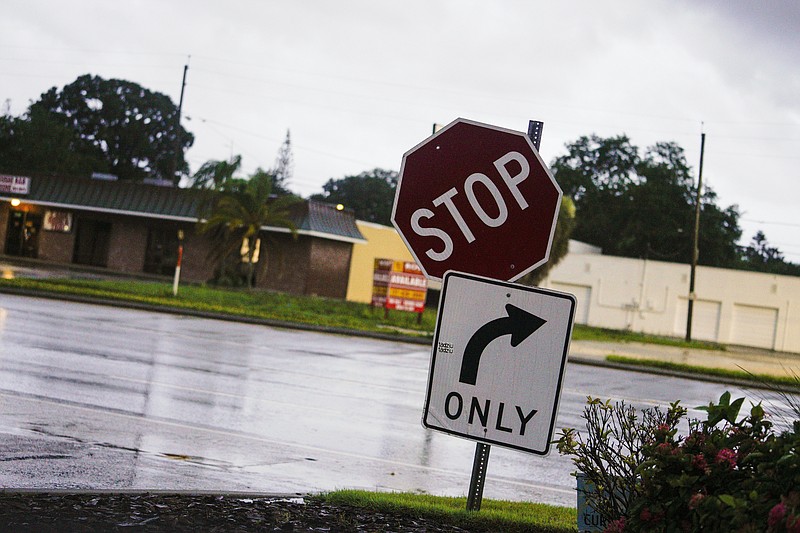 A couple of signs hang loose on their post after Hurricane Elsa moved over the Tampa Bay Area, Wednesday, July 7, 2021 in Pinellas Park, Fla. The Tampa Bay area was spared major damage as Elsa stayed off shore as it passed by. (Martha Asencio-Rhine/Tampa Bay Times via AP)

SAVANNAH, Ga. -- Tropical Storm Elsa carved a destructive and soaking path up the East Coast after killing at least one person in Florida and spinning up a tornado at a Georgia Navy base that flipped recreational vehicles upside-down and blew one of them into a lake.

Elsa's winds strengthened Thursday to 50 mph as the storm dropped heavy rains on parts of North Carolina and Virginia, the U.S. National Hurricane Center said. Elsa was expected to pass near the eastern mid-Atlantic states by Thursday night and move near or over the northeastern United States today.

No significant change in strength was expected through today, and Elsa is forecast to become a post-topical cyclone by tonight, the center said.

Tropical storm warnings were in effect along the coast from North Carolina to Massachusetts. There was a chance Long Island in New York would see sustained tropical storm-force winds late Thursday night and into this morning, the National Weather Service in New York warned.

[Video not showing up above? Click here to watch » https://www.youtube.com/watch?v=KVxk-se_4G4]

The weather service in Morehead City, N.C., tweeted that a tornado was spotted near Fairfield on Thursday afternoon. A tornado warning had been issued for Hyde County and surrounding counties.

Authorities in Jacksonville, Fla., said one person was killed Wednesday when a tree fell and struck two cars. A spokesperson for the Naval Air Force Atlantic Office said Thursday that a sailor assigned to Patrol and Reconnaissance Squadron 16 in Jacksonville was killed.

Nine people were injured Wednesday evening in coastal Camden County, Ga., when a tornado struck a campground for active-duty service members and military retirees at Kings Bay Naval Submarine Base. Eight of those hurt were taken to hospitals, base spokesperson Chris Tucker said.

The EF2 tornado flipped over multiple RVs, throwing one of them about 200 feet into a lake, the weather service said in a preliminary report.

Tucker said about a dozen recreational vehicles at the campground were damaged. Some buildings were also damaged on the base, which is the East Coast hub for the Navy's fleet of submarines armed with nuclear missiles. Tucker said there was no damage to submarines or any other military assets.

Sergio Rodriguez, who lives near the RV park, said he raced to the scene fearing friends might be hurt.

In South Carolina, a Coast Guard Air Station Savannah crew rescued a family who got stranded on Otter Island on Wednesday after their boat drifted off the beach. A man, his wife and daughter and three cousins were hoisted into a helicopter and taken to Charleston Executive Airport in good health Wednesday night, the Coast Guard said in a news release.

More than 7 inches was recorded at a weather station near Gainesville, Fla., the weather service reported.

Scattered power outages were being reported along Elsa's path Thursday afternoon, with about 26,000 homes and businesses without electricity from Florida to Virginia, according to the website poweroutages.us.

Elsa is the earliest fifth-named storm on record, said Brian McNoldy, a hurricane researcher at the University of Miami.

Information for this article was contributed by Jeff Martin, Jeffrey Collins, Freida Frisaro and Brendan Farrington of The Associated Press. 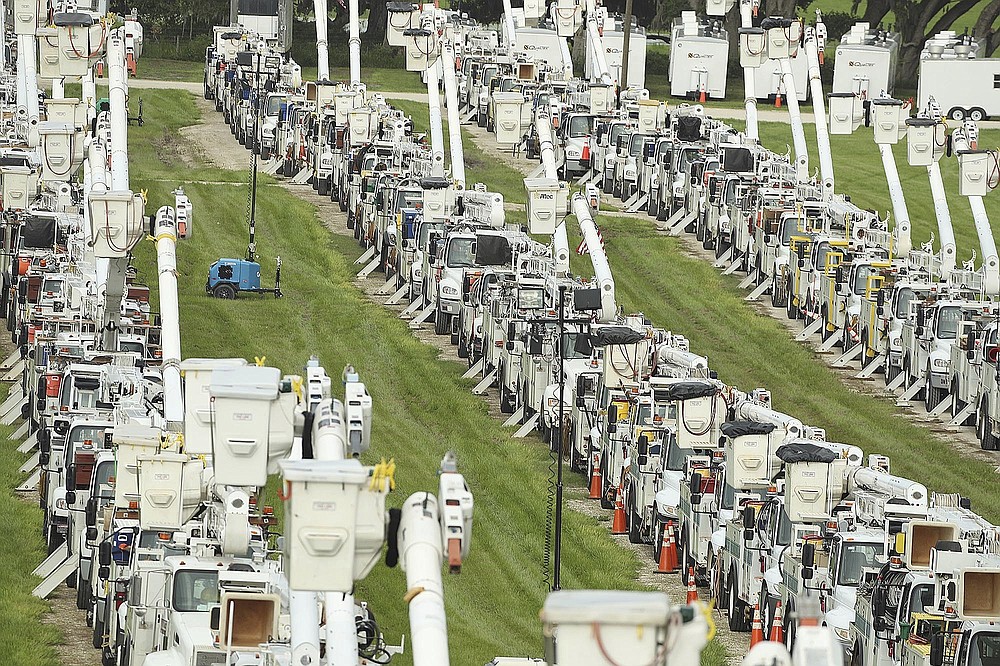 About 250 electrical utility trucks are lined up at Duke Energy's staging location in The Villages of Sumter County on Tuesday, July 6, 2021. Elsa may hit central Florida on Tuesday and Wednesday, with possible localized flooding. Duke Energy staged a total of about 500 trucks at the location, and they will be deployed following Elsa to repair damage to electrical lines and poles. (Stephen M. Dowell/Orlando Sentinel via AP) 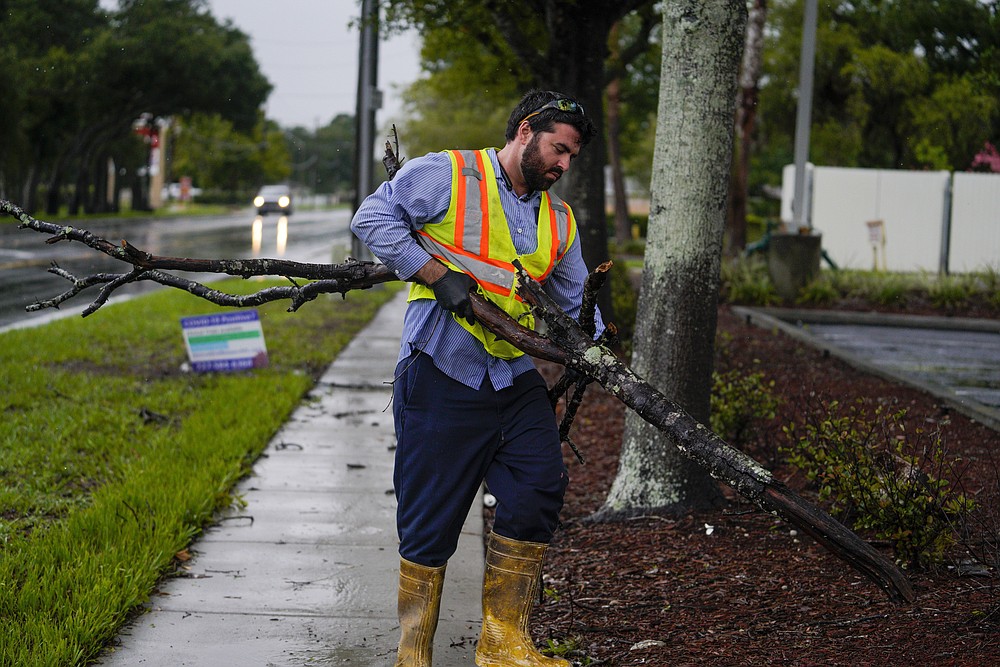 Michael Ciarleglio with the city of Pinellas Park, cleans up a few tree branches while working the morning after Hurricane Elsa moved over the Tampa Bay Area, Wednesday, July 7, 2021 in Pinellas Park, Fla. The Tampa Bay area was spared major damage as Elsa stayed off shore as it passed by. (Martha Asencio-Rhine/Tampa Bay Times via AP) 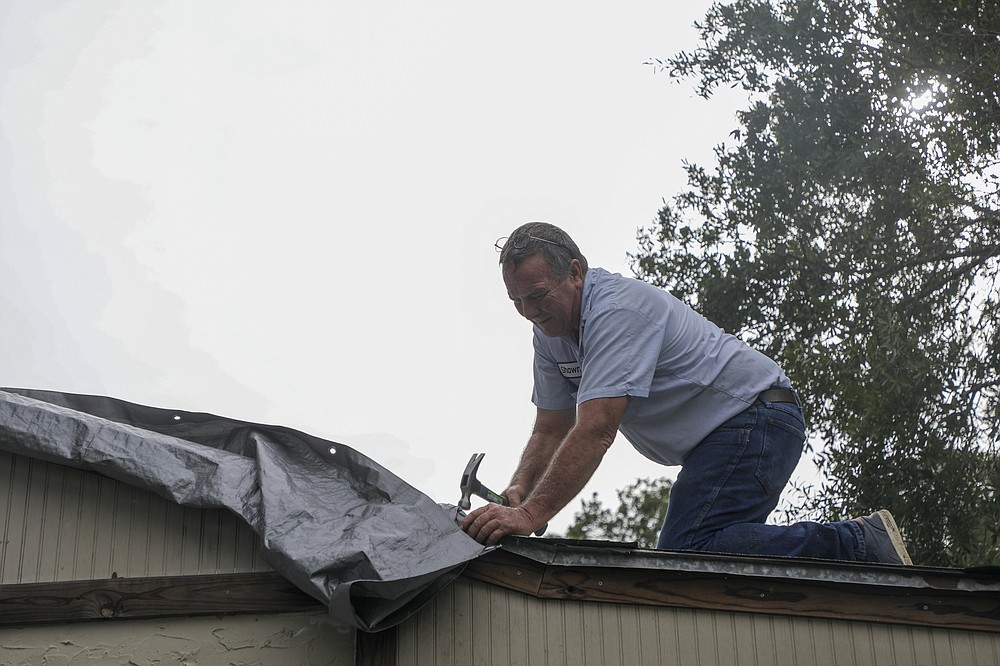 Shawn Frazier, 61, reinforces tarps over his Tampa home's roof ahead of Tropical Storm Elsa on Tuesday, July 6, 2021. Frazier said there was some leaking he caught during a recent rainy day. (Ivy Ceballo/Tampa Bay Times via AP) 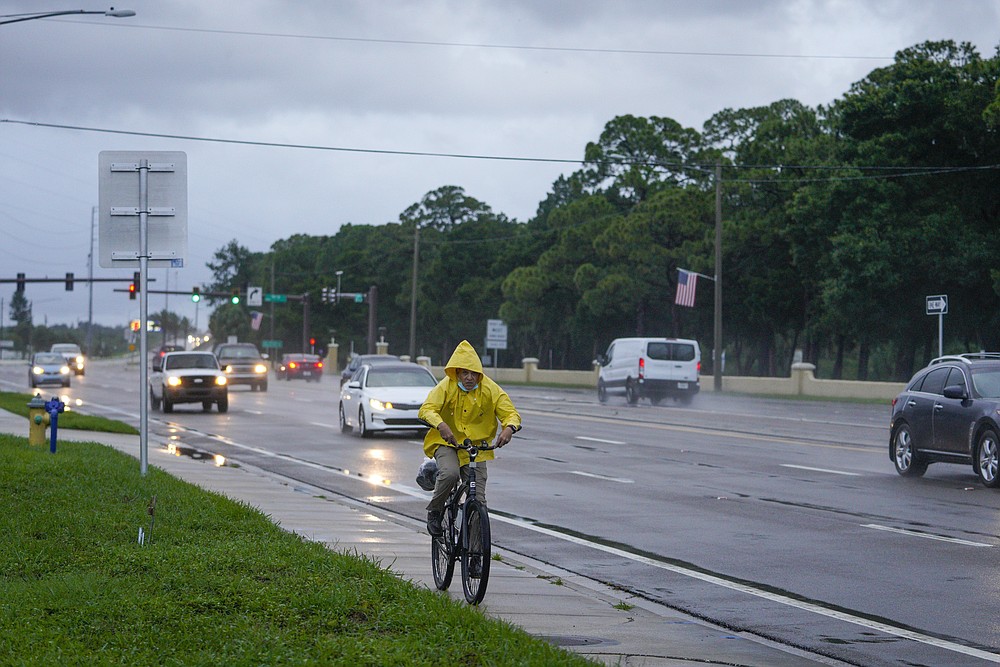 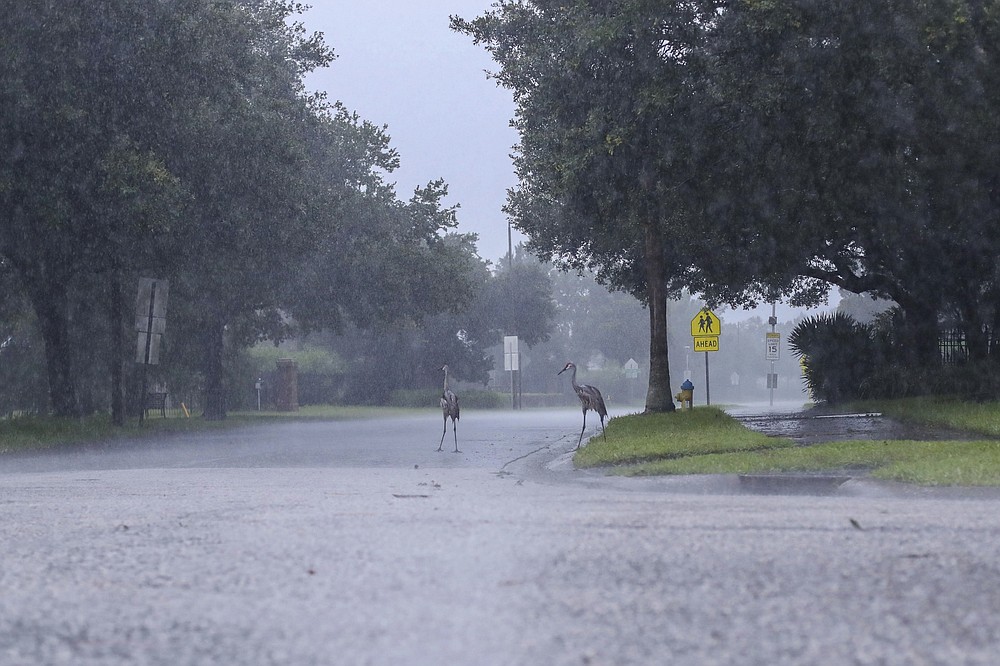 Cranes cross the road during a rainstorm from Tropical Storm Elsa, Wednesday, July 7, 2021 in Westchase, Fla. The Tampa Bay area was spared major damage as Elsa stayed off shore as it passed by. (Arielle Bader/Tampa Bay Times via AP) 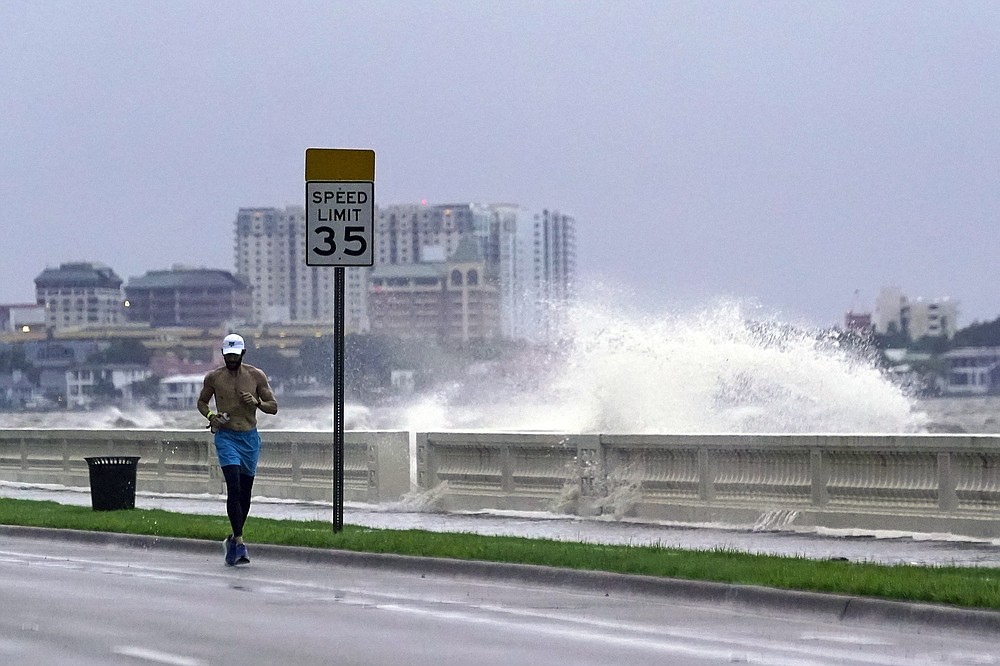 A jogger makes his way along Bayshore Blvd., in Tampa, Fla. as a wave breaks over a seawall, during the aftermath of Tropical Storm Elsa Wednesday, July 7, 2021. The Tampa Bay area was spared major damage as Elsa stayed off shore as it passed by. (AP Photo/John Raoux) 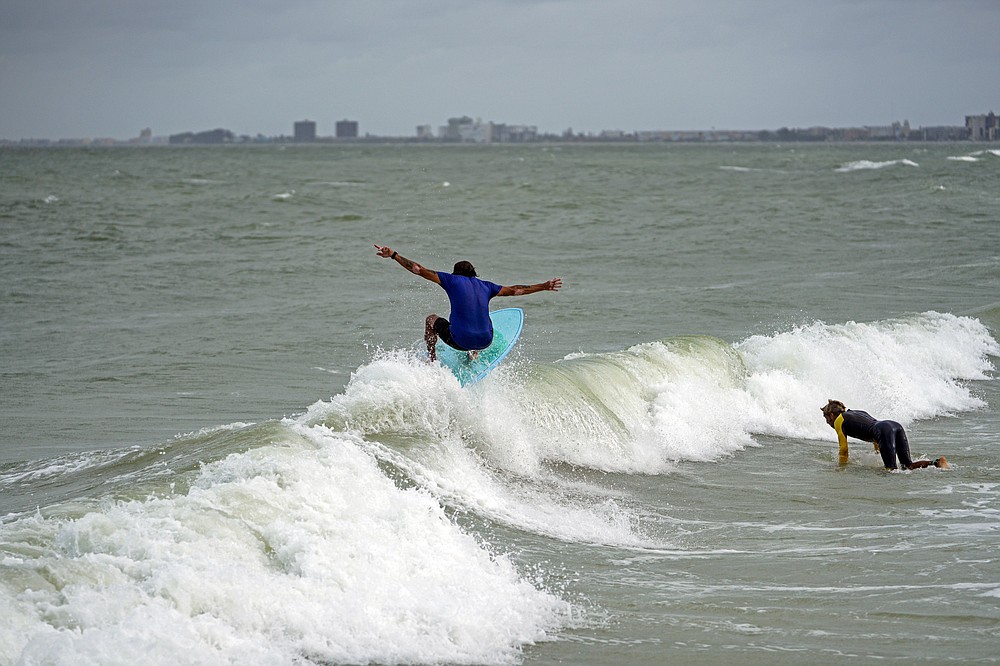 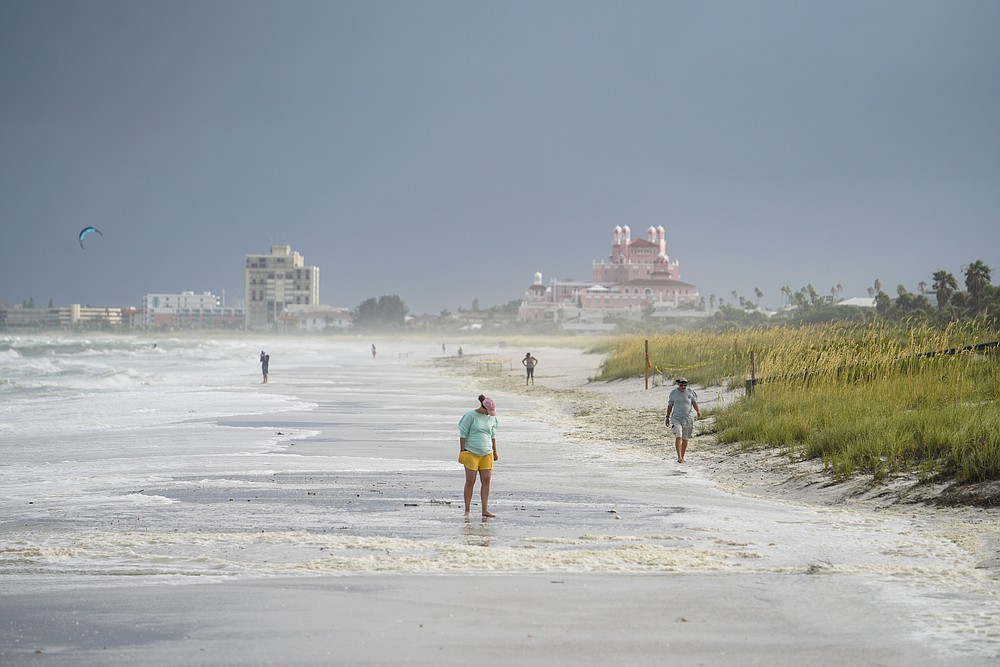 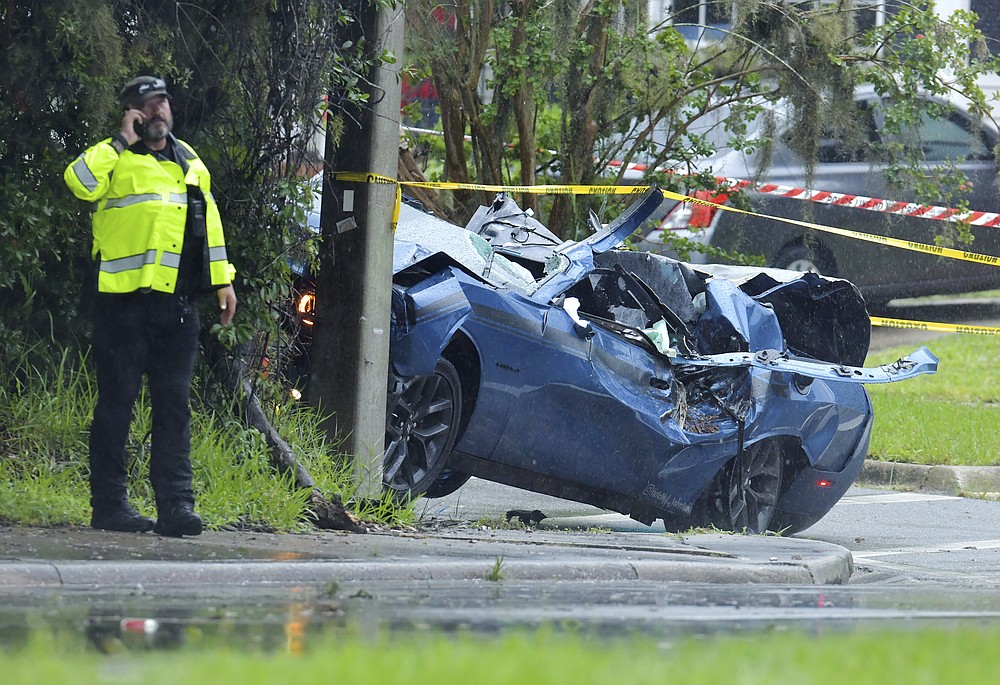 Law enforcement investigators in the scene of a fatal car crash on Roosevelt Blvd. in the Ortega neighborhood of Jacksonville, Fla. during the strong winds from Tropical Storm Elsa, Wednesday, July 7, 2021. (Bob Self/The Florida Times-Union via AP)