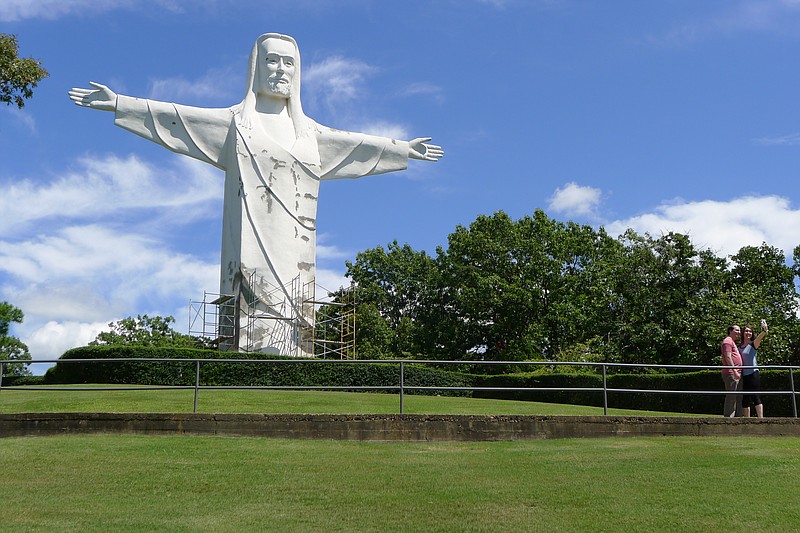 FILE -- The Christ of the Ozarks statue near Eureka Springs. It's the largest statue of Christ in the United States. (Arkansas Democrat Gazette/ BILL BOWDEN)

EUREKA SPRINGS -- A group of protest artists claim they strung a "God Bless Abortions" banner on the Christ of the Ozarks statue.

Members of Indecline, a group of activists and artists, smuggled the banner on the property Thursday night and hung it on the 65-foot statue of Jesus just before sunrise Friday, according to a news release from the group.

The banner spanned more than 44 feet, the release states.

Indecline said in the release that the banner was "in direct response to the dramatic attempts being made in Arkansas and throughout the South, to ban abortion services to women in need."

A live video of the banner being cut down was posted on the Great Passion Play's Facebook page at 9:15 a.m. Friday morning.

"The Bible says what man intended for evil God intended for good," Kent Butler, director of operations at the Great Passion Play, said, referring to the story of Joseph in Genesis. "We're a place of hope, love and peace."

Butler said they plan to use the banner as work cloths for church groups coming to the company grounds to do painting and renovation work on the property during the coming months.

Friday's tours and performance will continue as planned with about 1,500 people expected to visit the site, Butler said.

Indecline has claimed responsibility for similar incidents, including altering the billboard of a Christian ministry in Byhalia, Miss., earlier this year, TV station WLBT reported.

The billboard's message was changed in March from "WORRIED? Jesus offers security" to "WORRIED? Planned Parenthood offers abortion," according to WLBT.