'Josee, the Tiger and the Fish' treat for anime fans 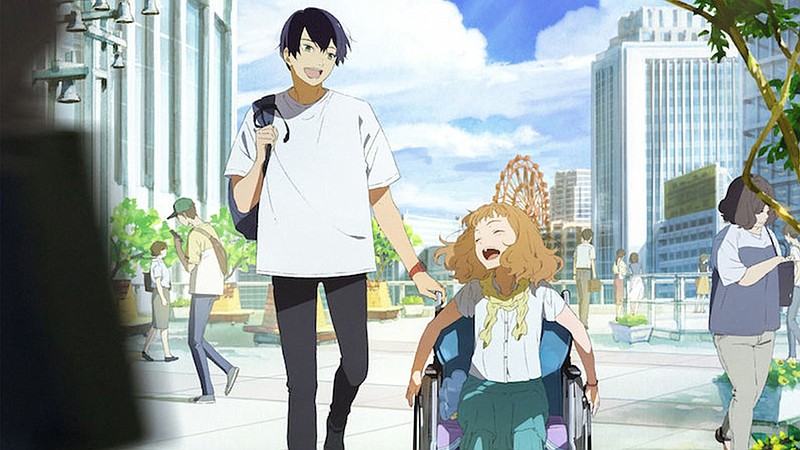 In the anime film “Josee, the Tiger and the Fish,” Tsuneo (voiced in English by Howard Wang), a marine biology student, and wheelchair-bound artist Josee (Suzie Yeung) become something more than friends.

American fans of Japanese animation (anime) often have to wait for new movies and shows to come to the west. It has improved in recent years with streaming services recognizing customers will pay to watch new TV episodes the day after they air in Japan.

But in most cases movies still take a while to arrive in the United States, especially if they're to be dubbed into English. "Josee, the Tiger and the Fish" is no exception, released in Japan in December and only just now arriving in American theaters.

Anime movies typically don't make a lot of money in America, and their theatrical runs tend to be limited as a result. But the success of "Demon Slayer: Mugen Train" earlier this year turned a few heads. It set records and earned more than $44 million, according to Collider.com. That made it the second highest-grossing anime film in America behind only "Pokemon: The First Movie."

"Josee" won't make nearly as much money. "Demon Slayer" is a wildly popular television series right now, in Japan and the U.S. But it's worth seeing nonetheless.

The film is based on a short story with the same title, published in 1984. And there have already been two live-action adaptations of the same short story, one in Japan in 2003 and one in South Korea in 2020.

Unlike "Demon Slayer" and other fantasy animes, "Josee" lends itself to live-action drama quite nicely. It's a fairly grounded story.

The narrative follows two characters, Tsuneo, a marine biology student, and Josee, a wheelchair-bound artist. Tsuneo works incredibly hard, logging hours in a dive shop and saving his pennies so he can fulfill his dream to attend graduate school in Mexico and study fish there.

Josee, meanwhile, is sheltered and kept at home by a protective grandmother.

Considering the most popular anime film in the world right now is about a group of teenage boys who fight demons with magical martial arts, it's easy for most people outside the fandom to forget anime can also be grounded and dramatic.

Tsuneo and Josee are brought together when someone pushes her wheelchair, and she ends up racing down a steep hill out of control. She crashes, flies out of her seat, and is caught by Tsuneo, who happened to be walking by.

From there, Josee's grandmother hires Tsuneo to be Josee's caretaker. The grandmother, though stern at times, is actually the funniest character in the movie. When Tsuneo arrives for his first day on the job and asks where she's going, the grandmother makes a hand sign for drinking. And when Tsuneo takes Josee to the beach instead of taking her right home as instructed, grandma tells him she'll "cut it off" if he does that again. She's blunt and hard not to laugh at.

Fish, sharks, and other sea life are a constant theme in the film, and it's neat to have a protagonist who studies ocean life. It makes Tsuneo a thoughtful and intelligent protagonist to follow. And the way he throws himself into work, no matter how difficult, to save pennies for his dream, audiences can't help but root for him to succeed and get to Mexico.

Josee takes some time to warm up to. And it's not that she's bitter about her disability that makes her difficult to watch at times; it's how abusive she is to Tsuneo who shows her nothing but respect. She bites him, hits him, kicks him, throws water at him, and at one point, when she wants him to take her to the beach, threatens to tell her grandmother that he touched her inappropriately, even though he did nothing of the sort.

That last bit probably should have been omitted from the film. Weaponizing accusations is never appropriate.

So to say Josee and Tsuneo don't get along at first is an understatement. But this film is a romantic story, so the two characters do eventually warm up to each other. Tsuneo is so patient and caring, that as viewers watch him take Josee out for adventures every day -- to the zoo, trying new foods, visiting the library -- they'll get the joy of seeing Josee go from sheltered and a bit spoiled to strong and more independent by the movie's end.

Josee makes her first friend in a librarian who bonds with her over a series they both enjoy. And later when Josee reads "The Little Mermaid" (non-Disney version) to kids in the library, it's precious and cute.

And just when the audience starts to wonder where the drama will enter, the film kills a main character rather suddenly. The result is disastrous, and from that moment on, other characters say some really awful things to Josee.

The movie has a great score that really enhances the story's more dramatic moments. And the film's pacing is spot on. Each ounce of character development from deaths and car crashes is rightfully earned with strong writing.

Tsuneo faces some big challenges of his own throughout the movie, and it's refreshing to see him cry over those problems instead of trying to be macho and ignore them.

Audiences are treated to some amazing transition shots with leaves, rain, puddles and more. And a small detail that should be equally appreciated is characters having multiple outfits. So often, to save animators time, characters keep the same outfit for the entire movie or series. It's why Shaggy has the same green shirt and red pants for all 41 episodes of "Scooby-Doo Where Are You!"

But Josee is constantly wearing different clothes (each outfit as charming as the last), and that's a pretty cool effort from the animators. Other characters get different outfits, too. That's an artistic effort to be applauded. Luca certainly didn't get a change of clothes from Pixar.

Perhaps the film's greatest moment comes from Josee at the height of her character arc. She designs her own storybook about a mermaid and then reads it to children at the library. And the art in the storybook is gorgeous. Folks would probably buy the book if it existed in real life.

The most frustrating part of "Josee, the Tiger and the Fish" comes from a character named Mai. She's one of Tsuneo's coworkers, and as a character, she's objectively awful. From the horrible things she says to Josee, to her own selfishness, dumping her emotional baggage on Tsuneo when he's in the hospital, to creating an unnecessary and ultimately useless love triangle, Mai should have been cut from the movie. She adds nothing but agitation.

And the film's climax is a little nonsensical as it tries to bring the story full circle.

But these are minor complaints about an otherwise wonderful film.

The film will be in select Arkansas theaters Monday, Tuesday and Wednesday, so be quick about snatching up a ticket. No telling what streaming platform it'll land on or when after it leaves.

‘Josee, the Tiger and the Fish’

Print Headline: 'Josee, the Tiger and the Fish' treat for anime fans