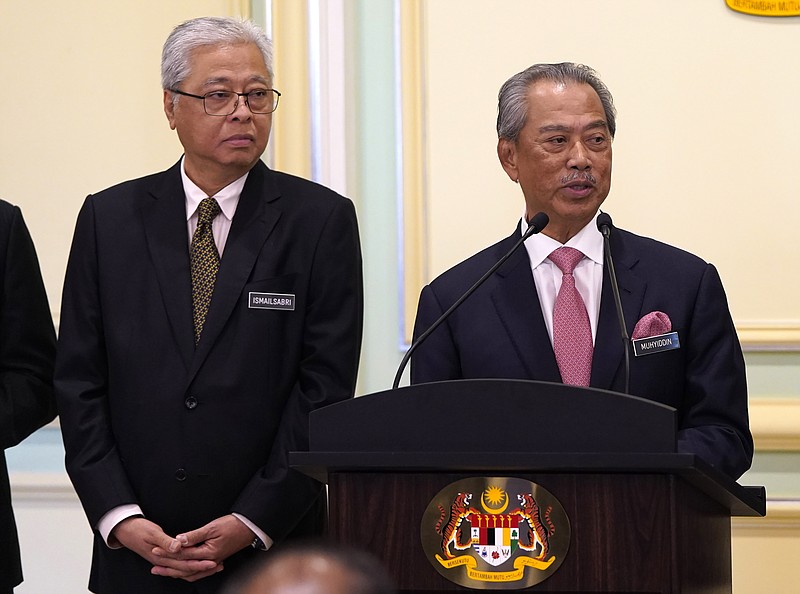 In this picture taken Wednesday, May 11, 2020, Malaysia's Prime Minister Muhyiddin Yassin, right, and Defense Minister Ismail Sabri Yaakob attend a press conference in the Prime Minister's office in Putrajaya, Malaysia. Muhyiddin has appointed Ismail as his deputy, in a calculated bid to dissuade the party from withdrawing support for his leadership. (AP Photo/Vincent Thian)

KUALA LUMPUR, Malaysia -- Malaysia's attorney general said Thursday that Prime Minister Muhyiddin Yassin remains in power until it can be proved in Parliament that he has lost majority support.

The country was in political limbo after the United Malays National Organization, the largest party in the governing alliance, pulled its support for Muhyiddin. The head of party urged Muhyiddin to step aside for an interim leader to take over until a general election can be held safely amid the coronavirus pandemic.

It marked the culmination of months of tensions since Muhyiddin took power in March 2020 after initiating the downfall of the reformist government that won the 2018 election.

His Bersatu party joined up with United Malays, which was ousted in the 2018 polls, and others to form a new government.

But the alliance was unstable with a razor-thin majority in Parliament and United Malays was unhappy playing second fiddle to Bersatu.

The announcement could trigger the collapse of Muhyiddin's unelected government and fresh elections, although voting is unlikely during the raging pandemic.

Attorney General Idrus Harun said there is no clear evidence that Muhyiddin has lost majority support.

He said this can only be decided by lawmakers in the lower house, not based on the statement of a political party.

"Therefore, legally, the prime minister and his Cabinet remain in power to exercise their federal executive power," he said in a brief statement.

There has been no reaction from Muhyiddin, 78.

Parliament has been suspended under a coronavirus emergency decree since January. The measure was criticized by the United Malays National Organization and others as a way for Muhyiddin to stay in power.

The legislature is to resume July 26, ahead of the Aug. 1 expiration of the emergency decree, after Muhyiddin caved in to growing pressure, including from the nation's king.

Zahid urged Muhyiddin to resign honorably and make way for a temporary leader who would focus on battling the pandemic until it is safe to hold a general election.

"This is important to allow a government that is truly stable and has the mandate of the majority of the people to be formed," he said after a meeting of United Malays' top decision-making body.

But it is unclear if United Malays' 38 lawmakers will toe the party line. Some have already protested Zahid's announcement.

Ismail and Hishammuddin are to retain their security and diplomatic portfolios.

Analysts said Muhyiddin has split United Malays by appointing second-tier leaders to his Cabinet and reinforced it with the appointments.

"There has been 17 months of political deals and things have now come to a head.

"There is open war in UMNO [the United Malays party] and we have a weak government trying still to stay in power," said Bridget Welsh of Malaysia's University of Nottingham and an expert on Southeast Asian politics.

No coalition has a clear majority in Parliament. Opposition leader Anwar Ibrahim may try to seek support but Zahid has said the United Malays will not endorse his candidacy for prime minister.

Anwar's alliance accused the attorney general of playing politics. It backed Zahid's statement, saying Muhyiddin was elected by the king last year based on support vouched by party heads, not individual lawmakers. The opposition said Muhyiddin must quit because he had lost support and the legitimacy to lead.

The United Malays National Organization earlier this year said the party will not work with Muhyiddin's alliance in the next general election.

Its attempt to seek early elections has been stymied by the worsening coronavirus crisis. 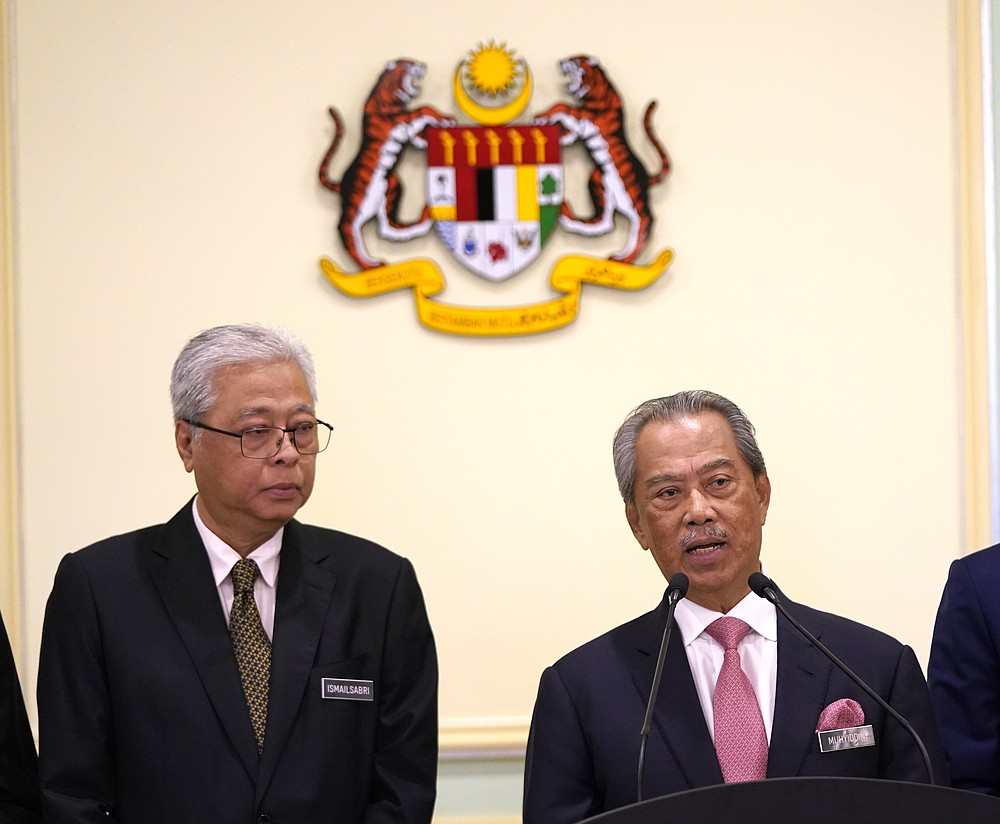 In this Wednesday, May 11, 2020, photo, Malaysia's Prime Minister Muhyiddin Yassin, right, and Defense Minister Ismail Sabri Yaakob attend a press conference in the Prime Minister's office in Putrajaya, Malaysia. Muhyiddin has appointed Ismail as his deputy, in a calculated bid to dissuade the party from withdrawing support for his leadership. (AP Photo/Vincent Thian)