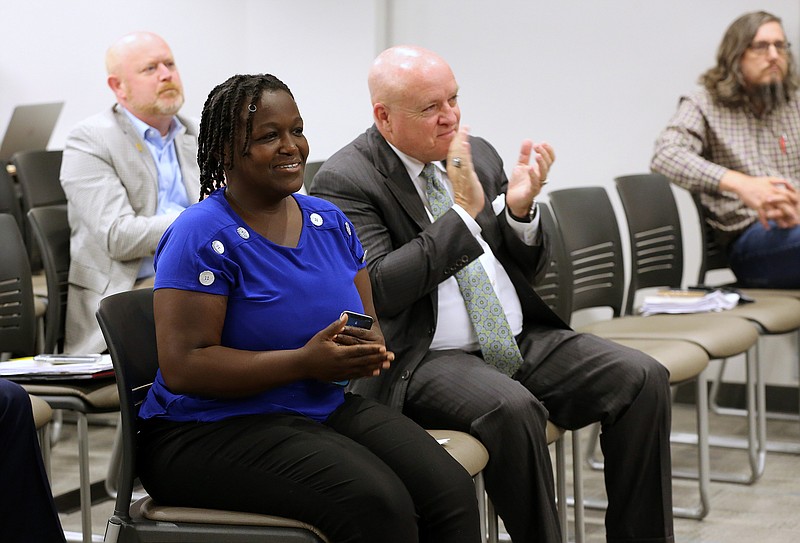 The Arkansas Board of Education voted Thursday to remove the 2019 restrictions or “guardrails” it placed on the Little Rock School Board’s authority to operate, freeing the district to act more like other districts.

In the same unanimous vote, the Education Board concluded that the 21,000-student district has met the criteria to exit the most severe, level 5/intensive support category of the state’s accountability system. As a result, the district is being placed in the level 4/directed support category for at least one year — during which there will be state monitoring and district reporting on a quarterly basis to the state board.

“This is a momentous day for the Little Rock district,” Superintendent Mike Poore told the Education Board after state Deputy Education Commissioner Stacy Smith described the district’s compliance with its exit plan and recommended the lifting of the operating restrictions on the local board.

“You can argue all day long about whether this state control thing should have happened or not, but the foundational principles of what we are trying to do for school improvement is just the right work,” Poore said. “And we have done it well and we have done it with all of you,” he said, adding later that being under state control had been “super helpful.” Education Commissioner Johnny Key said just before the state board vote that he was happy that the state and district had reached this point and happy for Little Rock School Board President Vicki Hatter and her board colleagues in their pursuit of making the capital city district more successful in the future.

Gallery: State Board of Education Meeting

“With all of the challenges we have faced in the last six-plus years, I feel like today is a historical day for us — to say that we have made progress, that progress must continue, how can we help you,” Key said. “That’s what it’s about — how can we help Little Rock, help all districts, and make sure we are moving together in the right direction.” “Please vote ‘yes,’” Key then said to laughter in the room as he noted that he doesn’t typically try to influence state Education Board votes, “but I am today.” State Education Board member Fitz Hill of Little Rock made the motion that was seconded by Charisse Dean, also of Little Rock, who started on the board in July 2015 — just after the state board voted to take control of the district.

“It’s been a long journey,” Dean said at one point.

The board’s unanimous voice vote was met with applause from the in-person audience of about 40 Little Rock district leaders and Division of Elementary and Secondary Education staff members. Former Education Board member Jay Barth of Little Rock was in the meeting as was Hatter and former Little Rock School Board member Jim Ross.

Hatter addressed the Education Board, in part to ask that there be clarity in what the state wants from the Little Rock district as a district in the level 4 category of state support.

The Education Board’s action Thursday is the climax in a yearslong saga that began with the state takeover of the capital city district and dissolution of the elected School Board in January 2015 because six of the district’s then 48 schools were labeled by the state as being in academic distress.

The state-imposed restrictions on the nine-member School Board — elected in November and December — prohibited the School Board from changing the superintendent without state approval, changing the selection process for the district’s personnel policy committee, recognizing any employee bargaining agent and instigating any lawsuits other than routine litigation against vendors or contractors.

Hatter said in an interview after the vote that nothing is changing in light of the lifting of the restrictions.

One of the first actions of the new School Board was to ratify the exit plan. State officials have used the level 5 exit plan to evaluate district progress at the start of the 2020-21 school year, in midyear and this spring.

The exit plan called for the district to use the professional learning communities model and Robert Marzono’s High Reliability Schools framework for organizing the work of a school to accomplish greater student achievement.

The exit plan also required the use of teacher and administrator evaluation systems that help educators improve instruction.

It called for the implementation of the district’s adopted reading curriculum that relies on science of reading research and includes support for students who show characteristics of dyslexia.

And the exit plan required the district to have a state-approved master facilities plan and a three-year budget plan that does not result in district operators dipping into reserve funds to meet routine operating expenses.

Smith, a deputy commissioner who served as the state’s lead in the past year on the Little Rock exit plan, told the board that compliance with the exit plan was judged in part by visits to schools and classrooms, and review of artifacts, and interviews of more than 200 teachers and more than a dozen principals.

In most cases, better than 90% of teachers interviewed could cite and show evidence of the teacher collaboration work, their job evaluations and literacy instruction, Smith said.

“Is it perfect? No,” Smith said about the district’s efforts to improve literacy, including strategies for providing dyslexia services.

“None of the criteria I’m telling you about today are perfect,” Smith said. “I’m telling you there has been satisfactory progress made.” She cited as examples the fact that not all schools are in the same place in terms of the educator collaboration and management but the district has expectations that all campuses will move forward. In the areas of educator evaluations, there is a need to continue to improve the administrator feedback to the teachers.

Smith said the district established “really good baseline practices” and “stayed with it. It would be easy to lighten up on what was going on, they didn’t.” Moving to Level 4 after being released from Level 5 of the accountability system is required by the state rules, Key and Smith said. The quarterly reporting that will be required from the Little Rock district to the state Education Board over the next year will be a product of state and district work.

The state rules also call for the district have a written district support plan, which will include monitoring of the previously identified exit criteria to see if there is progress is being made, including in student achievement, Smith said.

Classification of a district as being in the Levels 3, 4 or 5 ’ is not a scarlet letter,” Smith said. “It’s really about support,” she said. “If Little Rock School District is successful, we’re all successful.” Key said that legislation on school accountability changed in 2017 in regard to school accountability to provide that support to districts exiting from state control and to keep them from falling back into the practices that resulted in state control. One year of Level 4 support is meant to help school districts avoid regressing.

“It is not a precursor to level 5 and it’s not a just-in case we need to take over again,” Key said. “It’s simply to maintain that collaborative work among the department and the district and the elected board so that the feedback loop is formalized and in place through this reporting structure.” He said this is the first time the section of the rules has been applied, he said.

Education Board member Sarah Moore of Stuttgart asked if the district’s finances would be monitored and how the nearly $100 million in federal covid-19 relief money to the district would be tracked.

Smith responded that the Little Rock district is not in fiscal distress but is taking steps such as instituting a hiring freeze and as possibly taking a property-tax extension to the voters later this year as a way to meet capital construction needs. The state monitors finances of all districts, as it will the special federal funding, Smith said.

Moore noted that the district’s exit plan in regard to academics focused on ” inputs” rather than outcomes. She said that an 80% graduation rate in the district — meaning that 20% are not graduating — is a concern. She questioned whether outputs — such as student achievement data — would become part of the Level 4 quarterly reports.

Smith said that data should be included but she also said that the state “is very much expecting a drop” in state-required Aspire test scores in the state, including Little Rock, when Aspire test scores are reported later this summer in the aftermath of the 2020-21 covid pandemic school year. 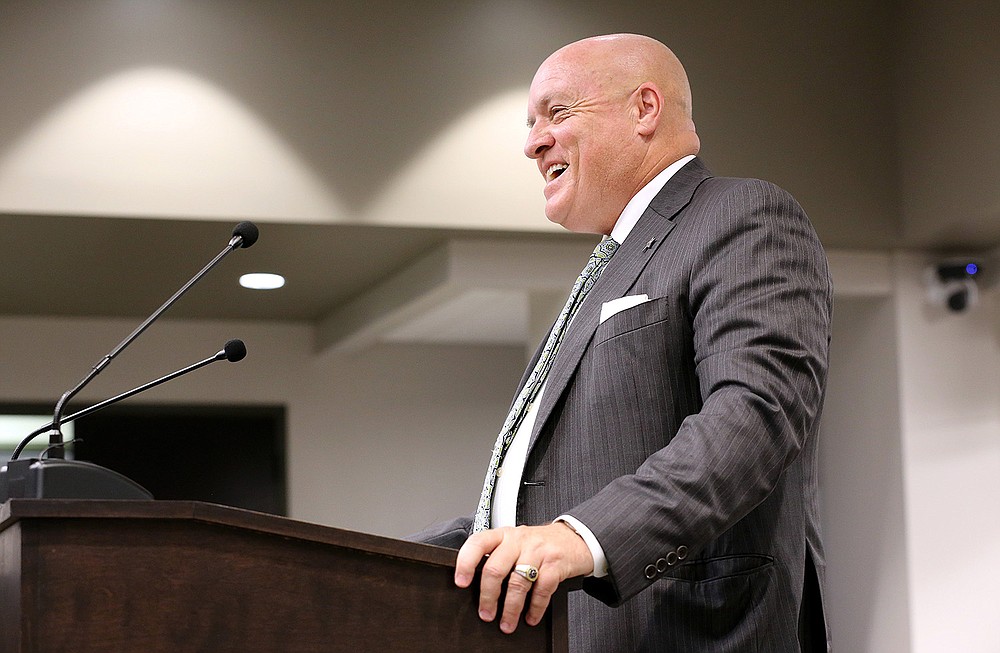 “You can argue all day long about whether this state control thing should have happened or not, but the foundational principles of what we are trying to do for school improvement is just the right work,” Little Rock School superintendent Mike Poore told the state Board of Education on Thursday. He said later that being under state control had been “super helpful.” (Arkansas Democrat-Gazette/Thomas Metthe)
ADVERTISEMENT