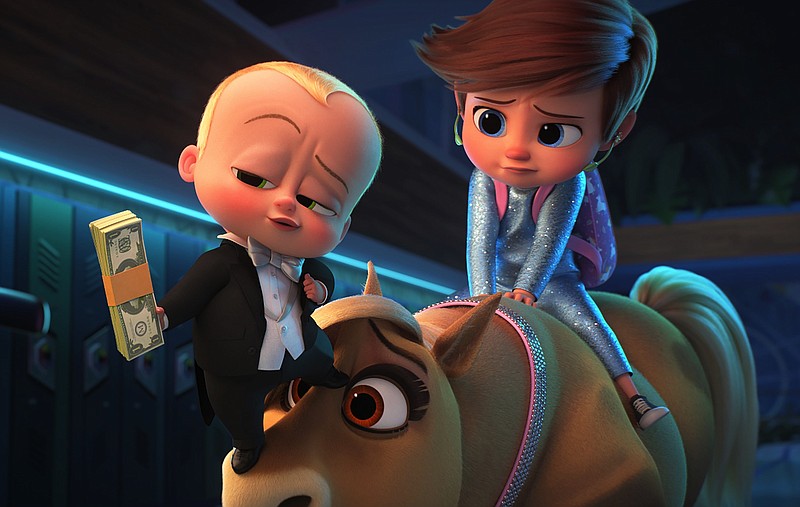 Studios and theaters need some big hits to rekindle enthusiasm for moviegoing. Hollywood has seen a few big weekends in 2021 but is overall doing far less business than in pre-pandemic times. Sales over the July 4 period fell from a week ago, despite two new releases and an extra day of moviegoing on Monday.

"The industry has seen films debut with boffo numbers, but finding legs has been very difficult," Jeff Bock, a senior box office analyst at Exhibitor Relations Co., said before the weekend. "The road to recovery will be a long one, but hopefully by the holiday season this year, we'll see theatrical exhibition normalize."

Without much competition, Universal generated about $66 million in ticket sales from the three films over the four-day period, matching the estimate of Boxoffice Pro. "F9" was expected to take in $33 million.

Universal dominated "with a wide array of content from the genres of action, animation and horror," Paul Dergarabedian, senior media analyst at Comscore, said Sunday.

While it's a bit unconventional for a major studio to open two big films on the same weekend, Universal's head of domestic distribution Jim Orr said they simply saw an opportunity and have historically had great successes on the Fourth of July weekend.

"This [past] weekend is just a great glimpse of what we do constantly, which is provide theatrical audiences with a diverse slate of quality films," Orr said. "The results speak for themselves."

The varied slate, he said, is something the studio takes great pride in.

"We have films for every single audience out there," Orr added. "We have tremendous partners, with DreamWorks and Blumhouse, and we also have some of the biggest franchises in the industry with the 'Fast' saga."

Paramount's "A Quiet Place Part II" landed in fourth with an estimated $5.6 million including Monday, bringing its total to $145.8 million in its sixth weekend. "The Hitman's Wife's Bodyguard" took fifth with $3 million for the weekend.

"We are still in an unusual marketplace," Dergarabedian said. "But this is a solid weekend -- "81% of theaters are open in North America and moviegoers had a smorgasbord of options. This feels like truly the first fully fledged summer weekend."

The based-on-a-Twitter-thread film "Zola" also had a strong opening on 1,468 screens. The film about a road trip to Florida gone wrong has earned an estimated $2.4 million since June 30. According to studio A24, many of the New York and Los Angeles showings sold out last weekend.

"'Zola' is disproving the notion that only blockbusters will bring people to the theaters," Dergarabedian said.

And despite also being available on Hulu, Questlove's "Black Woodstock" documentary "Summer of Soul" earned $650,000 from 752 theaters. Although a somewhat modest number, Searchlight said it's the best performing documentary of the year so far.

The successes are also notable for what they were up against outside of theaters. This was a weekend where there were quite a few at-home streaming options as well, with Amazon Prime Video's Chris Pratt blockbuster "The Tomorrow War" among them.

The box office will get another major test of moviegoer interest today. Walt Disney Co. will release "Black Widow," the first movie since 2019 from its Marvel Cinematic Universe franchise, the most profitable in cinema history. Adding a wrinkle to estimating cinema attendance is the studio's plan to also make it available for a $30 fee to Disney+ customers.

Even so, the action film, starring Scarlett Johansson and Florence Pugh, could break the $70 million pandemic-era opening record set by "F9." The movie could make as much as $90 million domestically in the first three days of its release according to Boxoffice Pro.