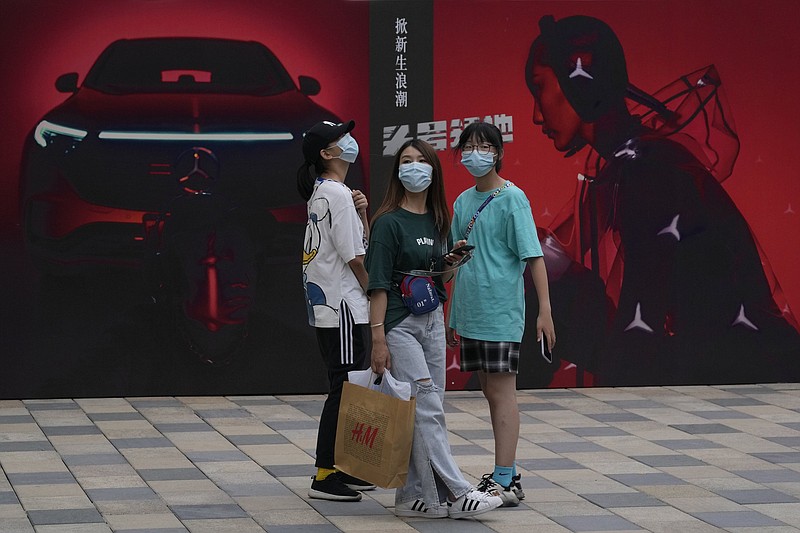 Shoppers pass advertisements for Mercedes Benz vehicles Thursday at a shopping mall in Beijing. China’s auto sales rose 27% in the first half of 2021 from a year earlier. (AP/Ng Han Guan)

BEIJING -- China's auto sales rose 27% in the first half of 2021 from a year earlier but still were below pre-pandemic levels, and production and sales fell in June because of global shortages of processor chips, an industry group reported Friday.

Sales of SUVs, sedans and minivans from January to June in the global industry's biggest market rose to 10 million, the China Association of Automobile Manufacturers said. Total vehicle sales, including trucks and buses, rose 25.6% from a year earlier to 12.9 million.

Passenger vehicle production fell 13.7% in June from a year earlier while sales were down 11.1% at 1.6 million.

Sales showed an "obvious decline after May," the manufacturers group said in a statement. "Passenger vehicles were mostly affected by an insufficient supply of chips."

China's auto demand already was weakening because of consumer unease about slowing economic growth and a trade war with Washington before dealerships were shut last year to fight the virus outbreak.

China's economy reopened relatively early after the ruling Communist Party declared victory over the virus in March. But passenger vehicle sales fell 22.4% in the first half of 2020, setting a low base for comparison this year. Annual sales in 2020 fell for a third year.

That is squeezing cash flow for global and Chinese automakers that are spending billions of dollars on electric vehicle development to meet government sales quotas.

This year's demand was propped up by sales of electric and gasoline-electric hybrid vehicles, though they still are a fraction of the total.

Electric-vehicle sales in the first half of 2020 rose 200% to 1.2 million, but demand for them also is cooling, according to the association. Sales growth in June decelerated to 140% over a year earlier, hitting 256,000 vehicles.

Passenger car sales by Chinese brands in the first half of 2020 rose 46.8% from a year earlier to 4.2 million. Their market share rose 5.7 percentage points to 42%.

The global shortage of computer chips has also forced U.S. automakers to cut production this spring. The result has been far fewer vehicles on dealer lots, just as the waning pandemic has fueled a pent-up consumer demand for cars, trucks and SUVs.

At the same time, used-car prices have soared on the demand created by the slowdown in new car production. The supply of used cars has been crimped because auto rental companies have had to buy up used vehicles to rebuild their fleets, much of which were sold off in the pandemic.

Information for this article was contributed by Tom Krisher and Christopher Rugaber of The Associated Press.