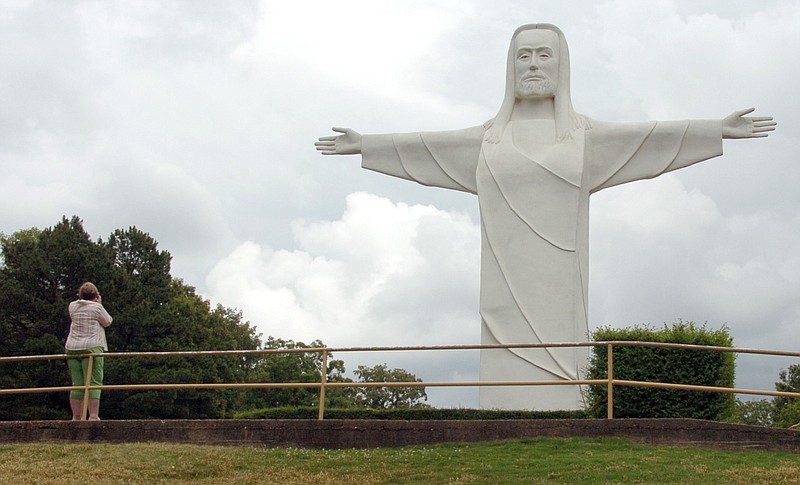 A visitor takes a photo of the Christ of the Ozarks statue in Eureka Springs in this May 2006 file photo. (Arkansas Democrat-Gazette file photo)

EUREKA SPRINGS -- An artists group took responsibility for hanging a large banner stating "God bless abortions" on the Christ of the Ozarks statue Friday, calling the banner its latest piece of protest art.

"While I personally am in agreement with the concept of pro-choice, this appears to be a publicity stunt," Mayor Robert Berry said. "Trespassing on private property to make a public statement, in my opinion, is not the appropriate method of promoting any political message."

The 67-foot-high statue is on the grounds of The Great Passion Play. Its arms spread 65 feet from fingertip to fingertip and was dedicated in 1966, according to GreatPassionPlay.org.

Kent Butler, director of operations for the nonprofit play, said he got a call regarding the banner about 7:50 a.m. Friday, saying "something needed to be taken care of."

Butler said Fanning's Tree Service of Berryville sent a crew out with a 65-foot bucket truck and did the work pro bono.

Indecline, which describes itself as a "renegade activist art collective," hoisted the sign up on the statue just before sunrise Friday after a team disguised as a construction crew smuggled it onto the property Thursday night, according to a news release from the group.

The heavy-duty cloth banner was 44 feet wide, weighed more than 50 pounds and was equipped with locking mechanisms and pulleys, according to the release.

The project was a direct response to "the dramatic attempts being made in Arkansas and throughout the South, to ban abortion services to women in need," the news release stated.

Indecline put themselves and those taking down the banner at risk through their actions, Butler said.

"Responsible activism is safe activism," Butler said. "People just need to be safe, and it was very unsafe."

Jayme Brandt, visual artist and owner of Tee Rex on Spring Street, said artists can effect change, but they should do so without breaking the law. Tee Rex specializes in Brandt's watercolor artwork and collectibles often inspired by pop culture.

"Art and activism are two different things," Brandt said. "You can be an artist who vandalizes, but then you're a vandalizer first."

Indecline's message was one of hate, not art, he said.

"I just don't like them hiding behind the word 'art' because it sounds like, 'Hey, we should be able to do things that are illegal and hateful because of art."

Butler said he doesn't expect the incident to decrease visits to the statue. If anything, it may build awareness and increase visitors to The Great Passion Play, he said.

The statue brings them peace and is a symbol of their faith in God, she said. The LeBlancs were shocked to hear about the banner.

She said the act won't affect future visits to the statue, and they planned on seeing The Great Passion Play's performance that evening, just as they have each time they've visited.

Play organizers do have a use for the banner, though, Butler said, noting that they'll be cutting up it up to use as dropcloths.

"The Bible says what was intended for evil, God uses for good, so we have more dropcloth than we've ever had," he said.

Butler said they do quite a bit of painting and staining to get ready for the play.

"In the past week, we've repainted all our Roman armor and shields," he said.

"So thank you for the donation," Butler said. "But not the way they did it."

Butler said The Great Passion Play will have to create an even more secure environment to prevent future criminal acts on the property.

"We have locks and gates, and now we'll be hiring some security," he said.

Butler said 700 people had made reservations to see The Passion Play on Friday night.

The fact that activists targeted The Great Passion Play "just means the work we're doing is impactful," he said.

"This is a place to spread hope, love and peace," Butler said. "It changes the way that you see the world."

Butler said a police report on the incident would be filed.