IN THE GARDEN: Mulberry weed is prolific, and should be culled as soon as found 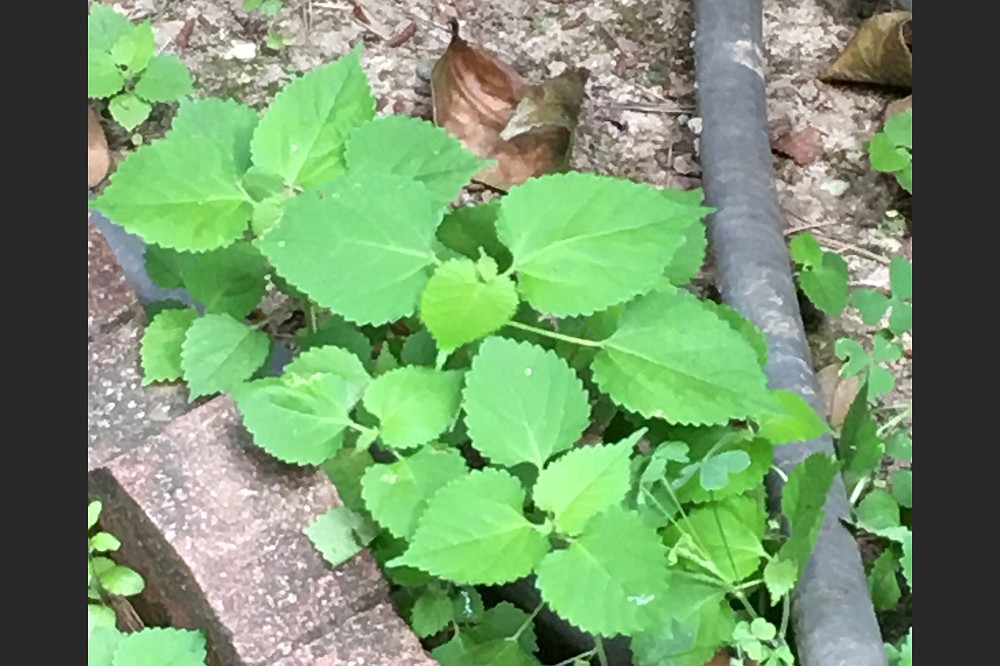 Mulberry weed is so named because it superficially resembles a mulberry tree seedling. (Special to the Democrat-Gazette)

Q Could you please tell me what weed this is? It has consumed all of my flower beds and even pops up in pots. Pulling it up only lasts until the next round can pop up and grow. Any suggestions for eradication short of a blowtorch? (Laughing out loud.)

A It appears to be mulberry weed — a tenacious summer annual weed. It gets its common name because it resembles a seedling mulberry tree. The best way to differentiate the two is the hairiness of the stems and leaves. The weed is hairy, while the mulberry tree is smooth. This plant starts to bloom at a young age with flowers in the joint where the branches are attached to the main stem. It is a prolific seed producer, and new seeds can start germinating in as little as 30 days in warm conditions. Hoe, pull or use a string trimmer to cut them down as soon as you see them. It could be controlled by contact herbicides but it is usually growing in close proximity to desirable plants, which makes it difficult to spray. Don't ignore it, because it will only set more seeds and then you will have even more weeds later in the season or next year.

Q What is this fungus growing all up and down our cypress tree trunk? Will it damage the health of the tree? The tree was planted in this island 13 years ago. This is the first year we have noticed this. 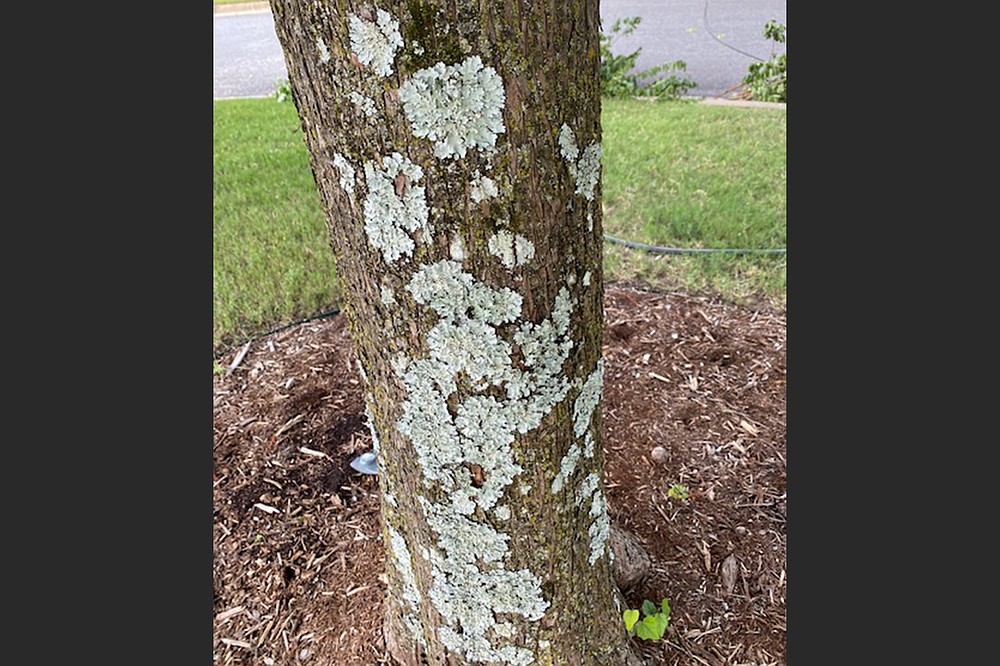 The lichen on this cypress does no harm to the tree. (Special to the Democrat-Gazette)

A It is actually a type of lichen. Lichens are often thought to be harmful, but they are not harming the tree in any way. You can find lichens growing on rocks and even building structures occasionally. Lichens look plant-like but are a different living organism comprised of an algae and a fungus growing together in a symbiotic way. The algae help with photosynthesis, while the fungus aids in water and mineral absorption. When lichens find a good environment for growing, with enough sunlight, they do. You will find them growing on slow-growing trees or declining shrubs, but they aren't causing the decline, they are just taking advantage of the sunlight and the slower growth rate of the plant. Lichens come in many forms and colors. They are not harming your tree in any way, so no control is necessary.

Q My bush in front of my house has been invaded by aliens! What is this creature? What should I do? 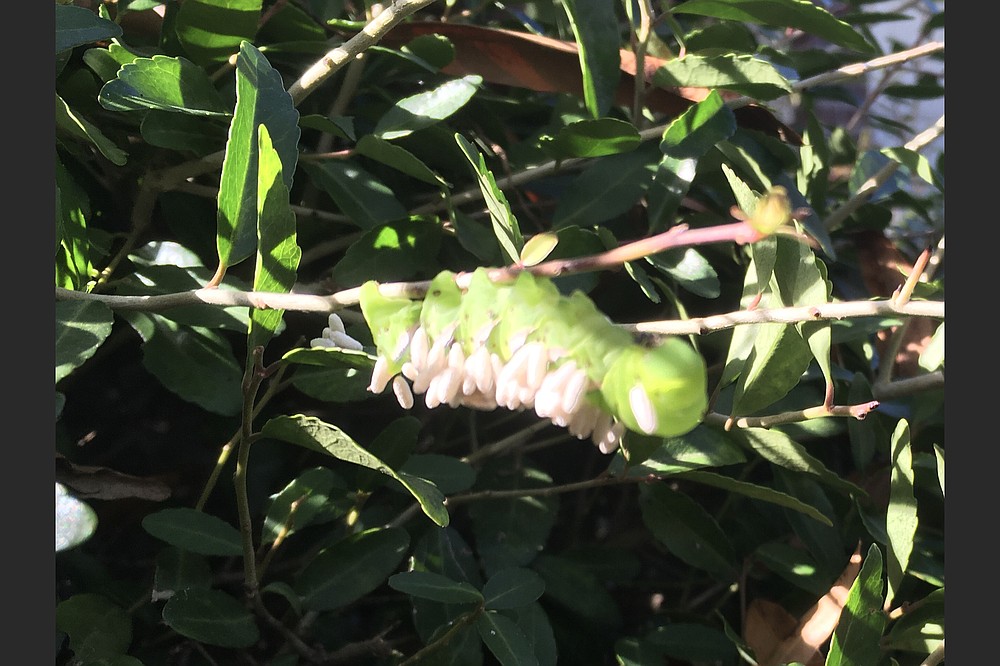 Colonized by the offspring of a parasitic wasp, this hornworm caterpillar is not long for this world. For In the Garden. (Special to the Democrat-Gazette)

Q My aucuba bushes, which have always flourished in the shade on the east side of my house, are suddenly developing black leaves and seem to be dying. Is there anything I can do to save them? 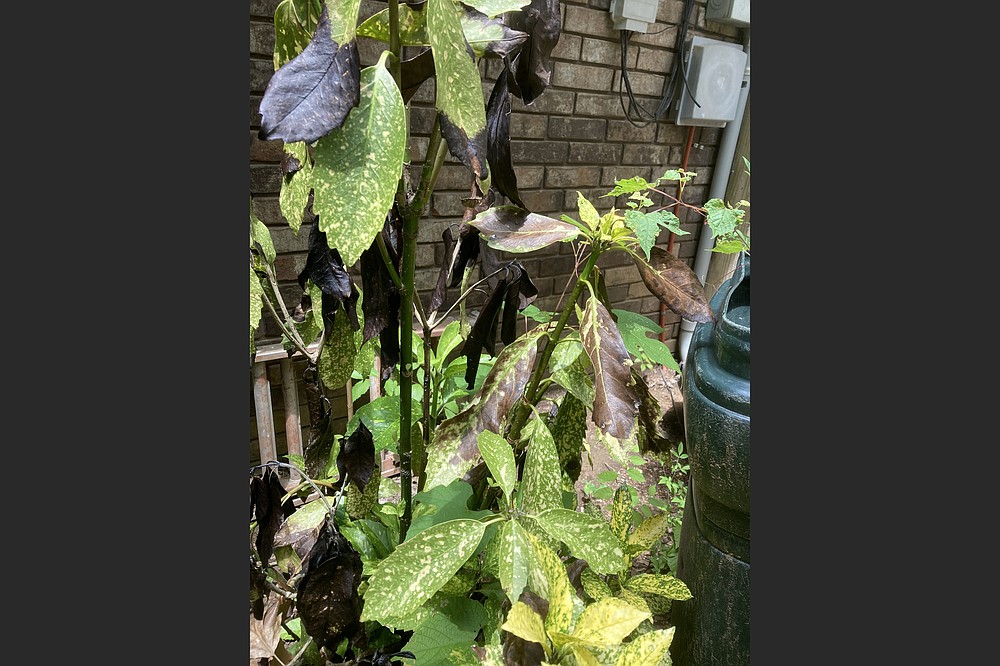 Direct sunlight can blacken the leaves of aucuba. (Special to the Democrat-Gazette)

A Did the area that the aucuba is in recently get more sunlight? Aucuba shrubs thrive in shade but will turn black from direct sun exposure. If sunlight hasn't changed, the trouble could be a root rot. Is the soil well drained? If you suspect a disease, take a sample of the leaves plus some soil containing roots to your local county extension office for a disease diagnosis.

Q When a tree service was here yesterday to cut a dead limb off another tree one of the workers looked at my huge sycamore tree and told me it was dying and needed to be taken down. He flaked off a section of bark where ants began to swarm out, and it also has a cavity where it branches into two large trunks. It leans toward my house and would be a disaster if it fell, taking out probably most of my house because of its size. When I asked how long he thought I had (it still leafs out and has green leaves now) he said maybe a year or two and when it no longer leafed out in the upper branches, it would have to come down. Do you agree? Is there anything that can be done to save it? 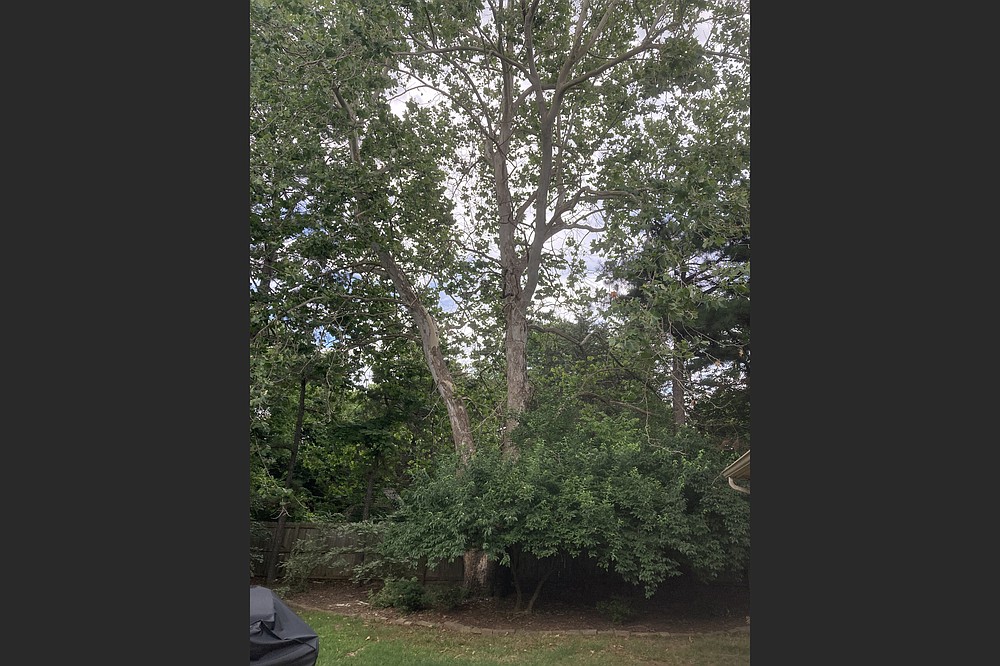 Elderly sycamore trees are prone to dropping branches, but a healthy one won't die suddenly. (Special to the Democrat-Gazette)

A Sycamore trees are large trees and can be prone to dropping branches. If it is fully leafed out with no die-back, I can't see an imminent death. Typically old, established trees don't die overnight unless they are struck by lightning or have major injuries. If the tree has a hollow that collects water, then it will eventually decay, and the decay will spread. You may want to contact the Urban Forestry representative in your area. Here is a shortcut link to the site: arkansasonline.com/710trees. They can give you some pointers on what to do.