As secular peace effort stutters in Israel, religious mediators hope to step in by PATRICK KINGSLEY THE NEW YORK TIMES | July 10, 2021 at 2:45 a.m. 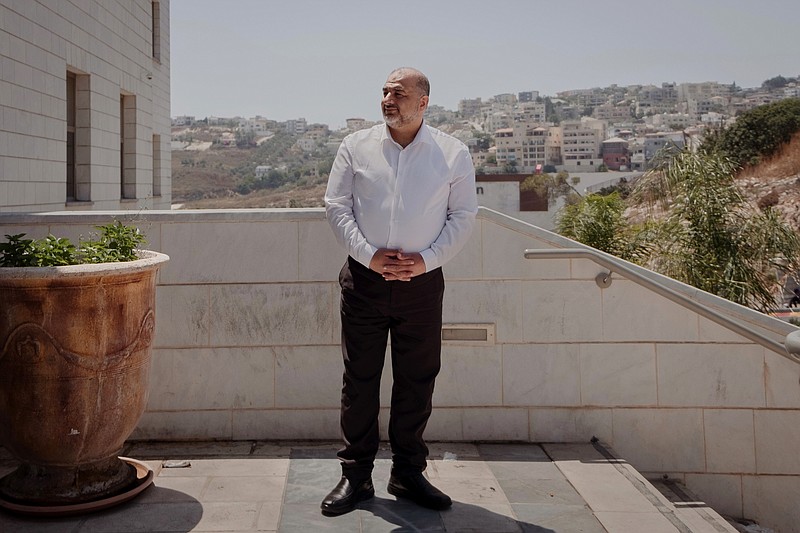 Mansour Abbas, leader of Raam, an Islamist party, lives in the Arab town of Umm al-Fahm. For Abbas the Sheikh Abdullah Nimr Darwish’s death was one of several pivotal way stations in his journey to lead Raam into Israel’s government. The inclusion of an Islamist party in Israel’s government has spurred a group of imams and rabbis hoping to build a religious-based peace movement. (The New York Times/Amit Elkayam)

JERUSALEM -- The rabbi stood before the grave of the imam, weeping as he gave his eulogy. In life, Rabbi Michael Melchior said, Sheikh Abdullah Nimr Darwish had promised him that he would never leave his side. In death, the sheikh had left him feeling as bereft as an orphan.

Abdullah died in 2017, four years before the Islamist party he helped found, Raam, became the first independent Arab faction to join an Israeli government coalition. But the sheikh's funeral and his unlikely friendship with Melchior, as well as their below-the-radar attempts at religious-based peacemaking between Israelis and Palestinians, were all part of an unexpected, decadeslong history of an effort by some Islamists to find a place within Israeli politics.

For Mansour Abbas, a politician standing in tears to the rabbi's right that day, the sheikh's death was one of several pivotal way stations in his journey to lead Raam into Israel's government.

"At Sheikh Abdullah's funeral and Rabbi Melchior's speech, it hit me -- that I need to be committed to Sheikh Abdullah and Rabbi Melchior's joint approach," said Abbas, who became Raam's leader in 2018 and entered parliament two years ago. The speech and the funeral "made me go from being a supporter and minor contributor to it to someone wishing to strengthen it and push it forward," he said.

To some unaware of Abdullah's teachings, Abbas' entrance into government in June was a surprise.

A political party led by Arab citizens of Israel had not formally joined an Israeli government since the 1970s. Tensions between Jewish and Palestinian citizens of Israel were at their highest in years after days of violent clashes in May. And Israel had just ended a brief war with Hamas, the militant group that holds sway in the Gaza Strip.

Raam and Hamas have roots in the same Islamist movement. And Raam's leading influence, Abdullah, was convicted and imprisoned in the 1980s for links to a militant Islamist group.

To those in and around Raam, its new role makes more sense in the context of Abdullah's spiritual journey since he left jail, when he had an ideological about-face and sought to use Islamic teachings to justify a more peaceful approach.

Raam's participation in government is partly the result of specific circumstances -- a personal decision by its leader, Abbas, to seek more political leverage to help Arab communities overcome entrenched gang violence and win better housing rights. And it was made possible by Benjamin Netanyahu, then the prime minister, who helped legitimize the idea of Arab participation in government by pursuing Raam's support.

To Abbas' critics within Arab society, it was a problematic and transactional act that grants power and legitimacy to hard-right allies in government in exchange for only small concessions to Arabs.

But it gave hope to Melchior and one of Abdullah's spiritual successors, Sheikh Raed Bader, who are fighting to restore momentum to a formal peace process that petered out in 2014. To them, Abbas' political maneuver was a natural outgrowth of a long-term project of religious-based peace building begun by Abdullah.

"My sheikh went through several stations in his life," said Raed, citing Abdullah's break with militance after leaving prison in the 1980s.

"The whole religious dialogue," Raed said, "started from that point."

Born in 1948 in an Arab town in what became Israel, Abdullah flirted briefly with communism as a young man before turning more seriously to Islam.

In the 1970s, he founded the Islamic Movement, a group based in Israel that aimed to encourage the Muslim minority to deepen its faith and, ultimately, to create a society governed by Islamic law. The group also had a militant wing that carried out arson attacks on Israeli property.

But in the 1980s, he surprised his followers by pushing to establish better relations between Arabs and Israelis, within Israel and the occupied territories.

Abdullah continued on a path of moderation, writing a book that rejected any religious justification for suicide attacks. He also began to work on several peace-building projects with Melchior, then a deputy foreign minister in the Israeli government.

Born in Denmark in 1954, Melchior was, at first glance, an unlikely partner for Abdullah. The rabbi of an Orthodox synagogue in Jerusalem and a member of the Israeli security Cabinet, he was a lifelong Zionist who believed that the return of Jews to Israel was the fulfillment of a divine plan.

But when they sat together, the pair fundamentally saw each other as two religious equals united by a shared respect for the other's theology, Melchior said. And to the rabbi, that gave them the ability to engage more constructively than secular Israeli and Palestinian politicians who have an implicit power imbalance.

"A staunch Islamist who was one of the great decision makers of the Islamic world," Melchior said. "And this staunch Zionist, who's been in the Israeli Cabinet for years, and whose children and grandchildren are officers in these elite units in the Israel Defense Forces. How can we be that close? How can we end each other's sentences?"

According to Melchior, it was because they looked each other in the eye, and thought: "We're more and more on the same side."

A WAY TO MOVE ON

Abbas became involved in the initiatives and later developed a close relationship with Melchior, speaking with him several times a month.

To the rabbi, these religious-based peace initiatives offered a way to move on from the secular-led diplomatic efforts of the 1990s and 2000s, which he said failed in part because they did not sufficiently include religious elements from the two populations.

"The traditional and religious population felt that the peace was part of the uprooting of what they felt was their sense of belonging, of their DNA, of their identity, of their narrative," Melchior said.

After Abdullah's death, Raed took up his mantle. He worked with Melchior to defuse another crisis in 2017, when the installation of metal detectors at the entrance to the Al-Aqsa Mosque compound in Jerusalem almost set off another uprising.

"If the religious element is not inside the peace camp, and not included fully, it just won't happen," Melchior said. "I, for one, do not want to exclude the secular -- not from our society and not from the peacemaking," he added. "I just want to expand that sense of peace." 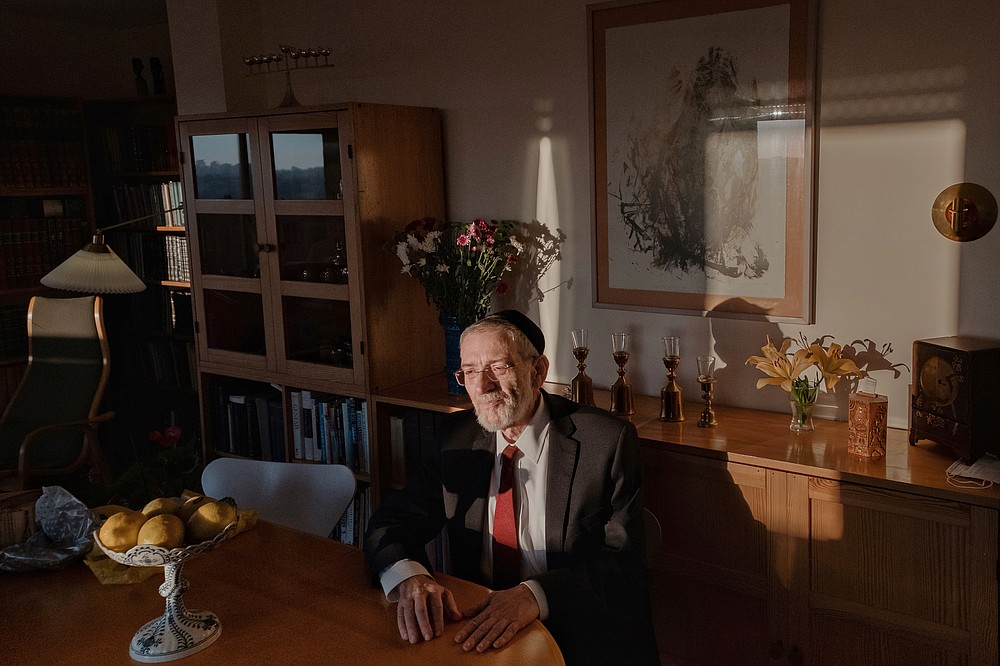 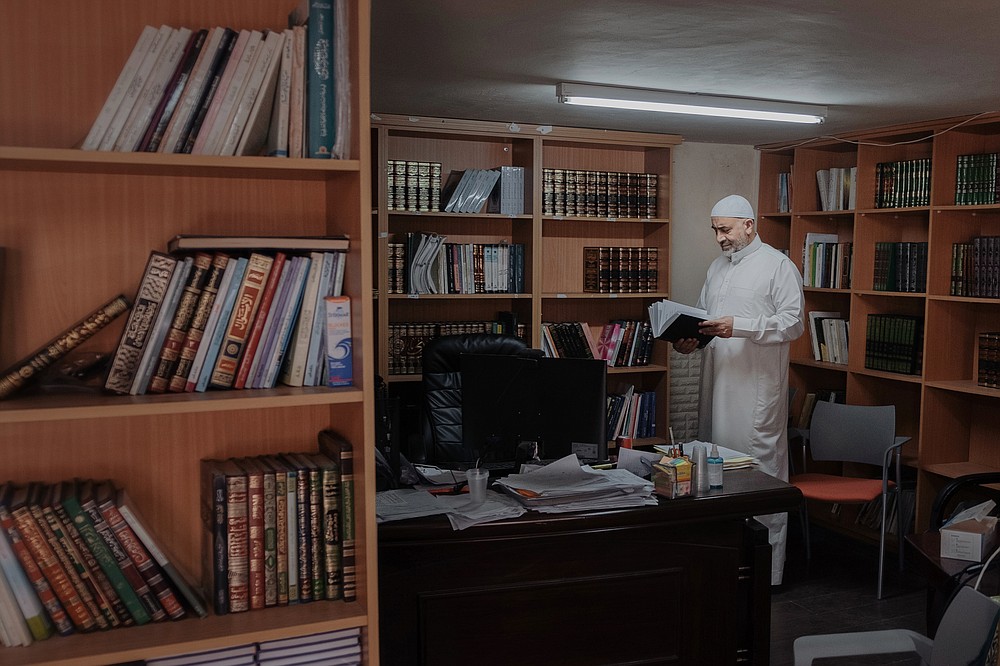 Sheikh Raed Bader, a follower and spiritual successor of Sheikh Abdullah, at his office in Kafr Qasim, Israel on June 26, 2021. Bader, one of Sheikh Abdullah Nimr Darwish’s spiritual successors, who are fighting to restore momentum to a formal peace process that petered out in 2014. The inclusion of an Islamist party in Israel’s government has spurred a group of imams and rabbis hoping to build a religious-based peace movement. (Amit Elkayam/The New York Times)