Arkansas dog who vanished 10 years ago found 2,000 miles away blind and arthritic 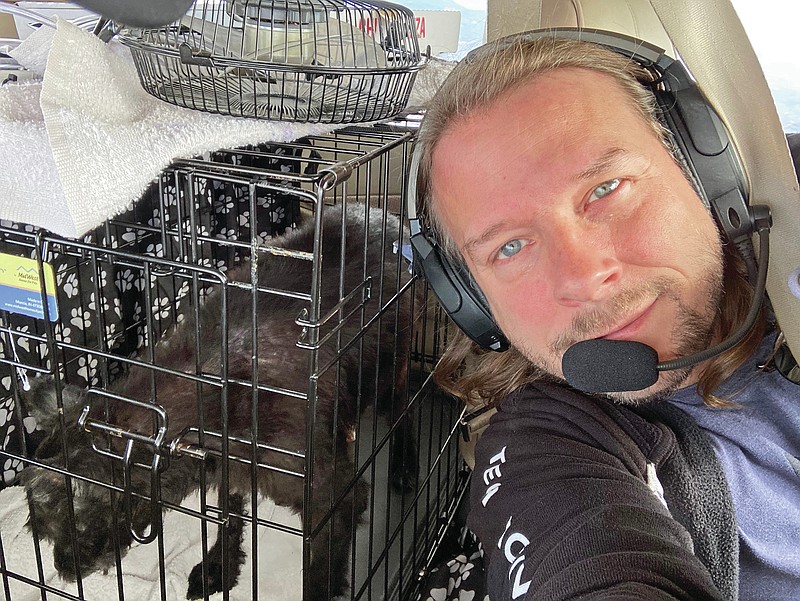 Submitted photo - Jeremy Wade, Razzle's pilot, takes a photo with the dog somewhere between California and New Mexico on July 6. Razzle was returned to his family later that night.

On April 9, 2011, a miniature schnauzer named Razzle wandered into the Arkansas wilderness for an adventure only known to him until this spring, when he was picked up by an animal control officer in a California trailer park.

The next days were a whirlwind journey worthy of a traveler such as the 16-year-old Razzle.

The spoiler: The now blind, arthritic dog with dementia will spend the final leg of his life back in the Natural State with the family who once raised him.

[Video not showing up above? Click here to watch » https://www.youtube.com/watch?v=z_wCDwLhsd0]

Razzle was 6 months old and the last of the litter when Aaron Howard, his wife, Rhonda, and 2½-year-old son, Simon, took him to their McRae home.

"We sat him in the car with my son, and Simon introduced himself," Howard said. "He said, 'Hi, my name is Simon."'

The puppy learned quickly how to be a survivor. He arrived with the family with heartworms. Then there was a twisted bowel that needed surgery.

Razzle and the family were inseparable. He traveled on vacations. He visited with extended family members. He was such a part of the extended family that when Howard's sister-in-law took her two dogs to get microchipped, she took Razzle too.

On that April 9 day in 2011, Razzle was let out onto the family's rural property, as he often was. That time he didn't return home.

"We looked for him for months," Howard said. "We posted posters."

Rhonda went on Facebook on April 18, 2011, and posted a picture asking for help in finding the dog. The social media site was in its early years and lacked strong neighborhood or city groups.

The family thought maybe the microchip would return him to them.

"As the years ticked by we gave up hope," Howard said. "We thought he died alone."

It didn't stop Howard or the family from thinking about Razzle through the years.

"What was really just odd, two weeks ago before that voicemail came through, I was coming home and thinking about Razzle," Howard said. "I was thinking, we'll just never know and, boom, got the voicemail."

The voicemail was left on Howard's sister-in-law's phone by the San Joaquin County sheriff's office. A deputy had seen Razzle wandering and called animal control. Razzle was checked for a chip and the call went out, Howard said.

The sheriff's office posted on Facebook about Razzle the following day.

"Stories like this don't happen everyday but they sure pull at our heart strings," the post says. "We wish Razzle the very best."

The end of the story still wasn't known for Razzle. As an aging dog who was living as a stray, it was unknown if Razzle would survive.

Debbie Newton, owner of RSQ209 animal rescue in California, saw the sheriff's office post and knew she had to help.

"A dog that age should not be sitting in a shelter," Newton said. "He crashed a couple times at the shelter. He was dehydrated, and he wasn't eating well."

Through connections with a transport group already organizing the trip to Arkansas, Newton was able to get approval to foster Razzle.

"The first week I had him it was very touch-and-go," Newton said. "The first day was about getting good nutrients into him, joint supplements. We got him up and started him walking inside of a pen so he could start exercising his joints."

In a few days, he was pacing on Newton's deck.

"It always seemed like he was looking for somebody," Newton said. "He didn't have that sense of peace here."

The next piece of the puzzle was how to get Razzle back to Arkansas safely. Transport organizers didn't think Razzle would survive being crated in the cargo area of a plane. They considered having someone fly with Razzle.

Then Jeremy Wade, a California resident and a native to Heber Springs, was contacted. Wade has worked with rescue groups to transport dogs up and down the California coast for years. Someone remembered his Arkansas connection.

Wade already had a trip to visit family and friends scheduled for the July 4 weekend. He was willing to help, but nervous about transporting the aging dog.

"Since my plane isn't pressurized and the Sierras are in the way, I fashioned an oxygen mask to use for him if needed," Wade said. "Typically when I cross over the Sierras, I breath supplemental oxygen for the time spent above 12,500 feet."

Wade typically flies through the Sierras at 17,000 feet but found an alternative route at 11,500 feet just for Razzle. He said flying so low through the mountain range was a first for him.

The trip from California to Sante Fe was about 5½ hours. There was a stop for fuel, and then the next 5½ hours to get Razzle home to Arkansas.

Landing the 2007 Cessna T182T on Tuesday at the airport in Heber Springs, where Wade first sat in a plane as a child, was a mixture of emotions, he said.

It took a moment to wake Razzle up. The blind dog, prone to confusion, needed to be awakened gently, Wade said.

Then Wade turned to the Howard family and the dog they'd never forgotten. No one knew if the dog would remember his first family or if he had the capability to think clearly at this point in life.

"My wife went over and called his name," Howard said. "He came pacing around, and when he smelled her hand he stopped. He let her pick him up."

It wasn't the reaction of a young dog jumping when reunited, but for Razzle, it was meaningful.

"The dog doesn't tend to like to be held," Wade said. "He certainly isn't comfortable being touched because of the time he spent in a stray situation. He was so peaceful and serene. I had never seen him comfortable in anyone's arms. He got totally relaxed as if he recognized some of the smells."

When the Howards returned home, to the same home Razzle disappeared from, there wasn't the searching that Newton experienced.

The family let him out into the yard directly out of the car, Howard said.

The blind dog paced briefly. Then, by smell alone, he turned around, walked up the stairs and to the front door where he waited for his family.

"He knew where the front door was," Howard said. "It was awesome."

Razzle spent that night sleeping in the arms of Rhonda, as he's spent the nights since.

"He probably won't live much longer, but I'm glad he was able to make it to his final destination first," Wade said.

Howard also understands that their remaining time with Razzle is limited.

"We want to ensure he is comfortable and knows he is safe and loved," Howard said. "He gets tired quickly and sleeps most of the day, but we are thankful to have him while we have him."

As far as where Razzle was for the past 10 years?

"We really don't have a clue," Howard said. "We live on the end of a dead-end gravel road. Nobody is really out there. Did he wander? How far did he wander? Did somebody find him, and did they take him to California?"