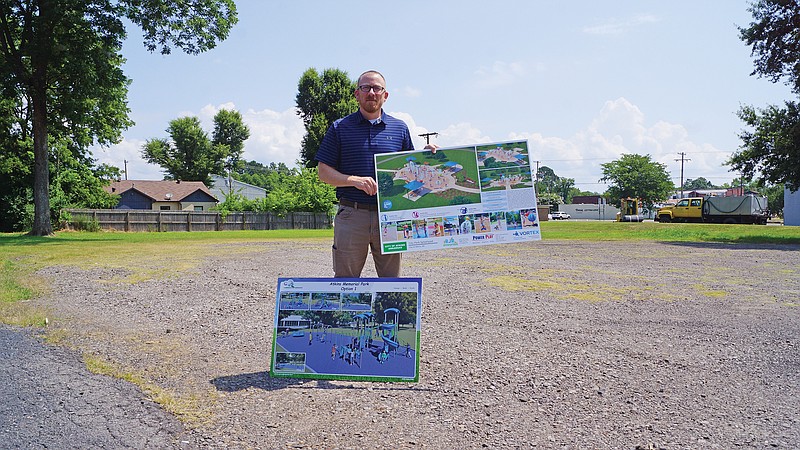 Atkins Mayor Rowdy Sweet stands on city-owned property at Arkansas 105 and 64, where Atkins City Park will be built. The plans include a splash pad and handicapped-accessible playground equipment. Sweet said groundbreaking will be held “any time,” and the projected completion date is Aug. 31.

Summers are going to get sweeter in the city known for Picklefest when Atkins builds a park, playground and splash pad, partially funded with a $250,000 matching grant.

Atkins received the grant from the Arkansas Department of Parks, Heritage and Tourism to build the park on existing city property at Arkansas 105 and 64.

Mayor Rowdy Sweet said the $583,487 project includes a handicapped-accessible playground, a splash pad, parking, a restroom and landscaping. The site will be called Atkins City Park.

“For years, People for a Better Atkins had wanted to put in this park,” he said.

Charles May, a longtime member of People for a Better Atkins, said he and Richard Pierce, another member, pitched the idea of a downtown park a few years ago at a meeting of the group.

“I was interested in something centrally located,” May said. An existing city park is south of town.

Pierce, a graduate of Arkansas Tech University in Russellville, said he suggested contacting the ATU Department of Parks, Recreation and Hospitality to come up with plans for the park, and students took the idea and ran with it as a group project.

“My actual degree is in parks-and-recreation administration, although I’ve been with Farm Bureau Insurance for 40 years,” he said.

Pierce said the Tech students and a professor toured the site, and “they put together a pretty nice overall park plan.” It was solely for the park and playground.

May said he talked to the Atkins City Council about the idea.

“Everybody liked the plan,” he said.

However, May said the project stalled.

“We got to pursuing it, and we learned quite quickly that to do something like that was way outside of our pocketbook,” May said. “Then we got a new mayor (Sweet in 2019), and they were digging, researching grants available, and other towns had gotten splash pads. That’s when the splash pad was added to the want list for the park. Rowdy took the bull by the horns and actually got that grant.”

The timing was perfect for the park project, Sweet said, because a 1 1/2-cent sales tax to pay off a bond issue was rolling off. In September 2019, residents voted to extend the sales tax for approximately 30 years and issue new bonds for local projects. Residents approved three separate ballot issues, with the proceeds to go for water, sewer and parks, the mayor said.

“We couldn’t have done it without the citizens voting for the bond initiative on the parks side,” he said. “We’ve been blessed around here; our sales tax, even during COVID, went up. I think around here, people kept moving, kept shopping.”

Sweet attributed some of the increase in sales taxes collected to a rise in online shopping. A 2018 U.S. Supreme Court ruling allowed individual states to require online sellers to collect state sales tax on their sales.

McClelland Consulting Engineers of Fayetteville drew the plans for the park and helped with the bid process, Sweet said.

Although the company didn’t use the previous drawings by ATU students, Sweet showed them to the engineers.

“I said, ‘Here’s what they were looking at in the past.’ [The engineers] used it as a visual,” Sweet said. “To do more [on the park], we ended up applying for this grant.

The 2,706-square-foot splash pad will include three activity areas — an action bay, a family bay and a toddler bay. There will be nine above-ground splash-pad features, including a large bucket that dumps water when it’s full. In addition, 12 ground sprays are in the design.

The playground will be built on a rubberized surface, Sweet said, and equipment will include swings, slides and a merry-go-round that can accommodate wheelchairs, although it is not represented in the current drawing.

“We’ll plant some trees, and we’ll have some shaded areas for picnic tables and benches,” he said.

A restroom will be delivered in one piece, the mayor said, and may be delayed.

“It’s all in the process. Along with McClelland Engineering, we got everything ready, and everything’s on order. It’s taking longer to get here than every other time, with COVID and the economy,” he said. Groundbreaking should be “any time,” and the projected completion date is Aug. 31.

Sweet said the new park will be a perfect addition to the city, whose existing park is off the beaten path.

“We have a pool and a small park that was built when I was younger, in the ’80s or late ’70s,” he said. “It’s in the south part of town, not really in the area of town that everybody can see it.”

The pool is closed now for renovations, which are being paid for with sales-tax proceeds, Sweet said. The existing park also includes tennis courts and a short walking trail.

The new park property, less than an acre, is two blocks south of the high school and elementary school, Sweet said. He said the park will be more visible and accessible for children and their parents than the current park.

“It’s more of a walking distance, and about a block from where Picklefest actually takes place,” he said, although the festival has been put on hold the past two years because of the pandemic. Picklefest celebrates the town’s history of producing pickles. Before closing in 2002, the Atkins Pickle Co. was a staple of the town’s economy for more than 50 years.

Sweet said another plus for the new park is its location adjacent to Matthews Center, an older rock building that is used for the city’s district court because there isn’t enough room in City Hall. Matthews Center is also available to rent for birthday parties and other events, he said, so it will be a complement to the park.

“People passing through town can see kids have a place to go in the summer,” Sweet said. “People can let their kids walk down there,” or walk with their young children. He said he also hopes the park will give people a reason to stay in town instead of going to nearby cities with such amenities.

Pierce said he looks forward to the new park.

“I think it’s great,” he said. “The city of Atkins is a relatively small community that has been a little bit stagnant; there’s not a whole lot of industry around here.”

And by the way, Pierce said Picklefest will be back “full force” in the spring, “bigger and better” than ever.