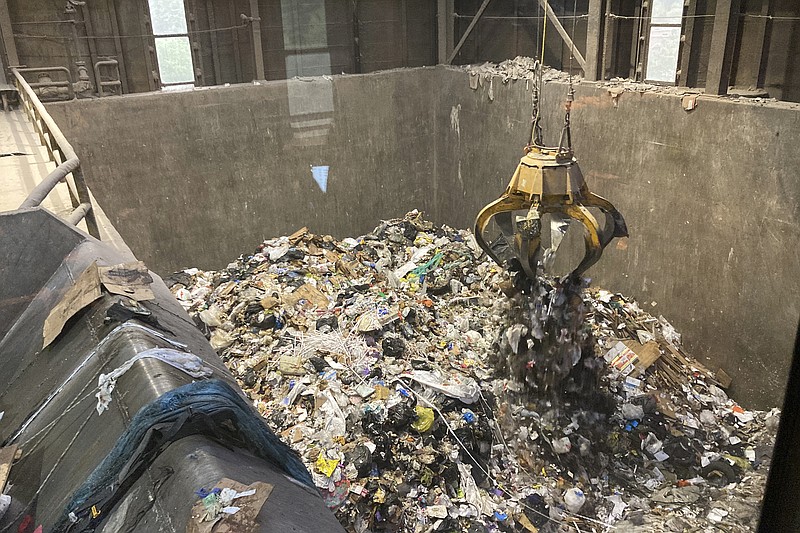 Garbage is dropped into a trash bunker at ecomaine, Tuesday, June 22, 2021, in Portland, Maine. Waste-to-energy converters like ecomaine are seeing an uptick in the amount of trash they collect to produce power as the coronavirus pandemic winds down in the U.S. These facilities burn garbage to create electricity. Environmentalists and renewable energy advocates are debating whether creating more energy by burning the excess waste is a safe idea. (AP Photo/Patrick Whittle)

PORTLAND, Maine -- America remains awash in refuse as new cases of the coronavirus decline, and that has reignited a debate about the sustainability of burning trash to create energy.

Waste-to-energy plants, which produce most of their power by incinerating trash, make up only about half a percent of the electricity generation in the U.S. But the plants have long aroused considerable opposition from environmentalists and residents who see the facilities as polluters, eyesores and generators of foul odor.

The industry has been in retreat mode in the United States with dozens of plants closing since 2000 because of opposition and emissions concerns. But members of the industry said they see the increase in garbage production in the U.S. in recent months as a chance to play a bigger role in creating energy and fighting climate change by keeping waste out of methane-creating landfills.

One estimate from the Solid Waste Association of North America placed the amount of residential waste up as much as 8% this spring compared with the previous spring. And more trash is on the way. A 2020 study in the journal Science stated that the size of the global plastic packaging market was projected to grow from more than $900 billion in 2019 to more than $1 trillion by 2021, largely because of the pandemic response.

That trash has to go somewhere, and using it as a resource makes more sense than sending it to landfills, said James Regan, senior director of corporate communications for Covanta, the largest player in the industry. The company processes about 20 million tons of waste a year to power about 1 million homes, and it could do more, he said.

"If we're going to reach climate goals by 2050, the waste sector really can and should be part of that story," Regan said. "This is low-hanging fruit. So what are we waiting for?"

Waste-to-energy plants are expanding in other parts of the world. More than 120 plants have been built in the last five years. They're concentrated most heavily in Europe and Asia. But the most recent new plant in the U.S. opened in 2015 in Palm Beach County, Fla.

President Joe Biden, meanwhile, has put a premium on the reduction of carbon dioxide emissions and creation of more renewable energy, and while that push has focused heavily on wind and solar power, the administration has also acknowledged a place for waste-to-energy conversion. The White House said in an April statement that the U.S. "can address carbon pollution from industrial processes" by including waste-to-power in the mix.

Any attempt to build more plants in the United States. will be met with resistance, said Mike Ewall, director of the Philadelphia Energy Justice Network in Philadelphia. The plants represent a threat to human and environmental health because they emit chemicals such as mercury and dioxin, he said. Communities have also opposed waste-to-energy plants because of concerns about airborne particulate matter that can have negative health consequences.

"The notion that this industry is going to be building new plants is just ludicrous," Ewall said.

But the fact remains that creation of garbage has increased, and municipalities have to deal with it somehow. One study, published in the scientific journal Environment, Development and Sustainability, attributed the increase to factors such as panic buying and more reliance on single-use items. Medical waste has also increased because of heavy use of personal protective equipment, the study found.

Converting all that new garbage to energy is the best available option, Grondin said.

"It's a lot of garbage. You can probably imagine with a lot of people at home, cleaning out, doing projects, that accounts for a lot of the increase," he said. "It has to go somewhere."

Other communities have looked at garbage-to-gas production as a way to get energy from swelling amounts of trash. These plants use strategies such as compacting garbage and sealing it to capture methane that can be used as fuel.

The garbage-to-gas program at the landfill in St. Landry Parish, La., started as a way to get carbon credits by burning off methane, said Richard LeBouef, executive director of the parish Solid Waste Disposal District.

"What we're saving monetarily is not super-substantial but in accordance with the green issue I think it's a great thing," LeBouef said.

Waste-to-energy plants typically create power by burning the trash at about 2,000 degrees and using it to boil water that is turned into steam, superheated and sent to a turbine.

Attempts to convert more pandemic garbage into energy are likely to be contentious, said Frank Roethel, director of the Waste Reduction and Management Institute at the State University of New York at Stony Brook.

But using the trash to make power beats letting it pile up, he said.

Information for this report was contributed by Janet McConnaughey of The Associated Press.