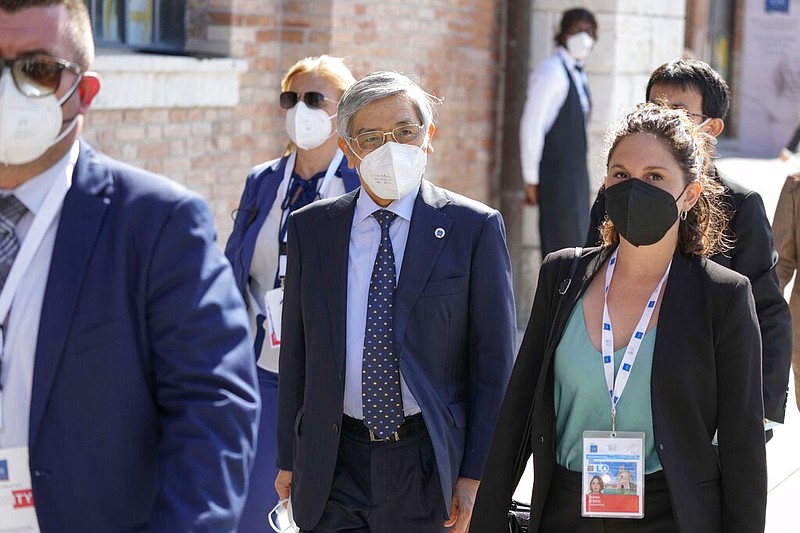 Haruhiko Kuroda (center), governor of the Bank of Japan, arrives Friday, July 9, 2021, for a G-20 meeting of economy and finance ministers and central bank governors in Venice, Italy. (AP/Luca Bruno)

VENICE, Italy -- Global leaders Saturday agreed to move ahead with what would be the most significant overhaul of the international tax system in decades, with finance ministers from the world's 20 largest economies backing a proposal that would crack down on tax havens and impose new levies on large, profitable multinational companies.

[Video not showing up above? Click here to watch » https://www.youtube.com/watch?v=0x92JrHxhPE]

If enacted, the plan could reshape the global economy, altering where corporations choose to operate, who gets to tax them and the incentives that nations offer to lure investment.

But major details remain to be worked out before an October deadline to finalize the agreement, and resistance is mounting from businesses, which could soon face higher taxes, as well as from small but pivotal low-tax countries such as Ireland, which would see their economic models turned upside down.

U.S. Treasury Secretary Janet Yellen said the proposal would end a race to the bottom in which countries have for years lowered their rates to attract companies. She said that had been "a race that nobody has won. What it has done instead is to deprive us of the resources we need to invest in our people, our workforces, our infrastructure."

The international tax proposal aims to deter the world's biggest firms from using accounting and legal schemes to shift their profits to countries where little or no tax is due -- and where the company may do little or no actual business. Under the minimum, companies that escape taxes abroad would pay them at home. That would eliminate incentives for using tax havens or for setting them up.

From 2000-18, U.S. companies booked half of all foreign profits in seven low-tax jurisdictions: Bermuda, the Cayman Islands, Ireland, Luxembourg, the Netherlands, Singapore and Switzerland.

After a weekend of talks, the top economic officials from the Group of 20 nations agreed to forge ahead. They formally threw their support behind a proposal for a global minimum tax of at least 15% that each country would adopt and new rules that would require large global businesses, including technology giants such as Amazon and Facebook, to pay taxes in countries where their goods or services are sold, even if they have no physical presence there.

"After many years of discussions and building on the progress made last year, we have achieved a historic agreement on a more stable and fairer international tax architecture," the finance ministers said in a joint statement after the meetings.

Implementation, expected as early as 2023, would depend on action at the national level. Countries would enact the minimum tax requirement into their own laws. Other parts could require a formal treaty.

The approach marks a reversal of years of economic policies that embraced low taxes as a way for countries to attract investment and fuel growth. Instead, countries are coalescing around the view that they must fund infrastructure, public goods and prepare for future pandemics with more fiscal firepower at their disposal, prompting a global hunt for revenue.

"I see this deal as being something that's good for all of us, because as everyone knows, for decades now, the world community, including the United States, we've been participating in this self-defeating international tax competition," Yellen said at the G-20 summit. "I'm really hopeful that with the growing consensus that we're on a path to a tax regime that will be fair for all of our citizens."

The backing of the broad framework by the finance ministers Saturday represented a critical step forward, but officials acknowledged that the hardest part lies ahead as they try to finalize an agreement by the time the leaders of the G-20 nations meet in Rome in October.

Among the biggest hurdles is an ongoing reluctance by low-tax jurisdictions such as Ireland, Hungary and Estonia, which have refused to sign on to the pact, potentially dooming the type of overhaul that Yellen and others envision.

Hungary and Estonia have raised concerns that joining the agreement might violate European Union law. Ireland, which has a tax rate of 12.5%, fears that it will upend its economic model, siphoning the foreign investment that has powered its economy.

Absent unanimous approval among the members of the EU, an accord would stall. Establishing a minimum tax would require an EU directive, and directives require backing by all 28 countries in the union.

Ireland had previously hinted that it would object to or block a directive, and Hungary could prove to be an even bigger hurdle given its fraught relationship with the union, which has pressed Hungary on unrelated rule-of-law and corruption issues.

Bruno Le Maire, France's finance minister, said Saturday that it was important that all of Europe supports the proposal. G-20 countries plan to meet with Ireland, Hungary and Estonia officials next week to address their concerns, he said.

"We will discuss the point next week with the three countries that still have some doubts," he said. "I really think the impetus given by the G-20 countries is clearly a decisive one and that this breakthrough should gather all European nations together."

RATE NOT YET SET

Policymakers also have yet to determine the exact rate that companies will pay, with the United States and France pushing to go above 15%, and negotiations are continuing over which firms will be subject to the tax and who will be excluded.

The framework currently exempts financial services firms and extractive industries such as oil and gas, a carve-out that tax experts have suggested could open a big loophole as companies try to redefine themselves to meet the requirements for exemptions.

Domestic politics could also pose hurdles for the countries that have agreed to join but need to turn that commitment into law, including in the United States, where Republican lawmakers have signaled their disapproval, saying the plan would hurt American firms.

Rep. Kevin Brady of Texas, the top Republican on the tax-writing Ways and Means Committee, has blasted the deal, saying, "This is an economic surrender to China, Europe and the world that Congress will reject."

"The most important thing is understanding that if there is going to be an agreement, that there cannot be an agreement that is punitive toward U.S. companies," said Neil Bradley, chief policy officer at the U.S. Chamber of Commerce. "And that, of course, is of great concern."

A report this month from the European Network for Economic and Fiscal Policy Research found that only 78 companies are expected to be affected by the overhaul but nearly two-thirds of them are American. The researchers estimated that the new taxes would raise $87 billion in revenue and that Apple, Microsoft, Alphabet, Intel and Facebook would pay $28 billion of that total.

"For the United States, it's going to be a fundamental shift in how we choose to compete in the world economy," Yellen said. "Not a competition based on rock-bottom tax rates, but rather on the skills of our workforce, our ability to innovate and our fundamental talents."

The U.S. already has a minimum tax on overseas earnings, but President Joe Biden has proposed roughly doubling the rate to 21%, which would more than comply with the proposed global minimum. American businesses are worried about being put at a disadvantage if their foreign competitors are only paying 15%.

The Biden administration also wants to raise the domestic corporate tax rate to 28% from 21%. Democrats in Congress are moving forward with legislation to make those changes to the tax code this year.

"If a U.S. company is trying to compete globally with a significantly higher tax burden because of this significantly higher minimum tax on its operations, that's a competitive issue for being able to be successful," said Barbara Angus, a global tax policy leader at Ernst & Young.

Information for this article was contributed by Alan Rappeport of The New York Times and by David McHugh of The Associated Press.