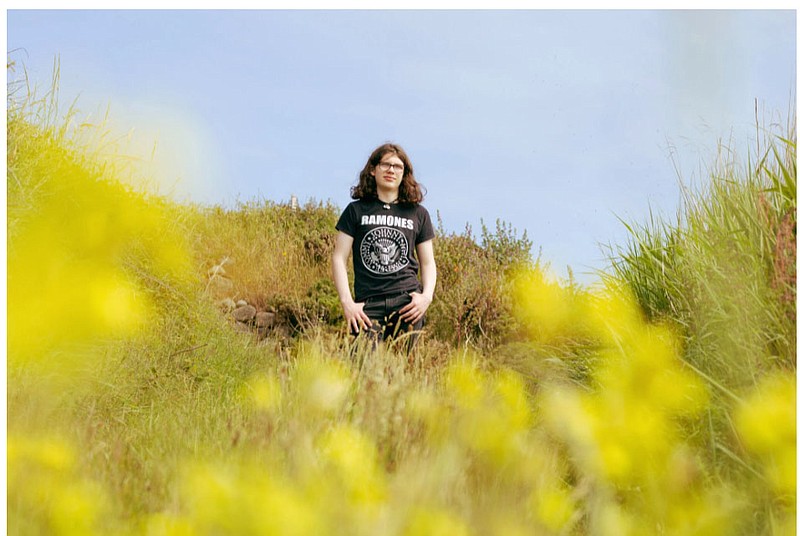 Dara McAnulty is pictured near his home in Northern Ireland. He is the author of “Diary of a Young Naturalist,” which won last year’s Wainwright Prize for nature writing. (Ellius Grace for The New York Times)

While he carefully stepped from one moss-carpeted rock to another, Dara McAnulty outlined his rules for nature watching.

"You'll never see something if you bring a camera," he said on this coastal stretch of Northern Ireland, "and you'll definitely never see what you're intending to find."

His rules quickly proved true. McAnulty had wanted to use the ramble near his home to show off the local curlew population, but it was high tide -- with waves sending salt spray spurting over the rocks -- and there were no birds to be seen.

Instead, he squatted down to stare into a rock pool in search of his latest obsession: shrimp. Seaweed swayed in the water, but there were no signs of marine life. Then, suddenly, he noticed the smallest movement. "Oh, there's a shrimpy boy!" he shouted. "Oh my God, it's amazing. Can you see it? Can you see it?"

McAnulty pointed at a translucent creature, about an inch long, darting about the pool. Then, he saw another, some more still, and started talking excitedly about shrimp -- how they work, what they eat -- before he stopped himself.

"Sorry," he said. "I've literally just done a biology test on the circulatory system of shrimps."

McAnulty, 17, is fast becoming one of Britain and Ireland's most acclaimed nature writers for work that is brimming with his passion as well as open about his autism. His debut book, "Diary of a Young Naturalist," published last year by Little Toller in Britain and released last month by Milkweed in the United States, won the Wainwright Prize, Britain's biggest award for nature writing.

Reviewers have heaped it with praise. "It really is a strange and magical experience," Christopher Hart wrote in The Daily Mail, before comparing McAnulty's writing to that of the poet Ted Hughes.

Robert Macfarlane, a fellow nature writer whose books include "Underland" and "Landmarks," said in a telephone interview he had been shocked by McAnulty's writing after first stumbling across it online four years ago. "I remember thinking, 'What is this voice?'"

Looking through McAnulty's eyes reveals a world that "sparkles differently," Macfarlane said. He then started quoting his favorite lines from "Diary of a Young Naturalist," such as one where the author describes his family being "as close as otters," and another about "the art deco lines of a gannet."

Macfarlane added: "There might be some suspicions this is a young writer being awarded for being young, but he's a master of one-liners."

McAnulty, in an interview at his home, said he had been obsessed with nature for as long as he could remember. Along with his brother and sister, he spent days as a child "climbing trees, rustling about, doing things most parents would never allow their children to do." His mother, a former music journalist, and his father, a conservationist, nurtured that passion, even if school bullies took exception to it.

One day, while he was struggling in primary school, the Royal Society for the Protection of Birds visited to talk about reintroducing red kites to Northern Ireland. "I listened, for the first time, in a long time," he wrote, and it made him want to fight for nature as well as play in it.

But he only started writing about it because of his autism. "I need to write, to process what's going on," he said, "otherwise everything's just banging around in my brain causing damage in there."

McAnulty started his own blog when he was 12. His early posts were simple profiles of animals, with titles like "Magical Moths!" But when he was 14, Little Toller asked if he wanted to write a series of posts for its website. Once McAnulty started, he realized what he was writing could be a book.

"Diary of a Young Naturalist" is divided into the year's seasons. In spring, McAnulty's writing is filled with the joy of being outside. On a trip to Northern Ireland's Rathlin Island, whose cliffs are a kaleidoscope of bird life, he tries to take in one species after another -- such as "a fulmar, dozing and waiting, a queen on her throne," and puffins, "diminutive inspectors," flying from burrow to burrow.

The diary entries are also frank about how autism affects McAnulty's life. "Dandelions remind me of the way I close myself off from so much of the world," he writes, "either because it's too painful to see or feel, or because when I am open to people, the ridicule comes."

In summer, his family prepares to move to a new house. He becomes overwhelmed by thoughts of change and of losing his favorite landscape, until one day he breaks down. "I'm submerged right now, completely under," he writes. He begs his parents to dig up their plants and bring them along.

"For most of the book, I'm not in a good place," McAnulty said, which he didn't realize at the time. "I don't think you realize how dark something is until you turn back on the lights."

He said he never considered leaving any of those experiences out. "It's a diary. If there's pieces of me missing, I'm going to come off as not being human, and it'll feel weird and awkward," he said. "Half of my decisions in the book wouldn't make sense if I didn't mention that I'm autistic, and the feelings wouldn't unless I mentioned that I was bullied."

The book is ultimately uplifting. In autumn and winter, McAnulty's pain is eased as he moves to a more supportive school. Inspired by Greta Thunberg, the Swedish environmental activist, he leads a school strike to highlight inaction against climate change. He goes to London to help deliver a "people's manifesto for wildlife" to the British government. He speaks at the first Irish meeting of Extinction Rebellion, a group whose members regularly get arrested. All those efforts build on previous conservation work, such as raising money to track and save raptors, his favorite birds.

"Dara has been instrumental in raising the awareness of birds of prey persecution to people of all ages, from all walks of life, in a way that many conservationists have not been able to master," Eimear Rooney of the Northern Ireland Raptor Study Group, which monitors birds of prey in the country, said in an email.

But McAnulty's writing doesn't try to overwhelm readers with planetary collapse or species extinction. That was deliberate, he said. "Everybody's been clubbed around the head already."

His next book, "Wild Child," scheduled to be published in Britain this month by Macmillan Children's Books, encourages children to seek and protect the natural world. He's already planning another book, too, he said, about his wanderings around Ireland, connecting nature with myth. Once that's done, he was unsure what would happen, but "writing will never disappear from my life," he said. "I need it."

On the Moneydarragh coastline, McAnulty kept having to step over bits of blue plastic, litter from the local harbor where fishermen toss their gloves and nets into the sea. The sight made him furious, he said, and he planned to organize a shore cleanup, but for that moment he wanted to put it out of his mind and enjoy the landscape.

As a fierce wind sent his hair flying around his face, he pointed out some of the little things he loved: a clump of pink sea thrift, a tiny whelk.

He always needed recovery time after interviews like this, McAnulty said. "But being out in nature always helps. I'm recovering right now." 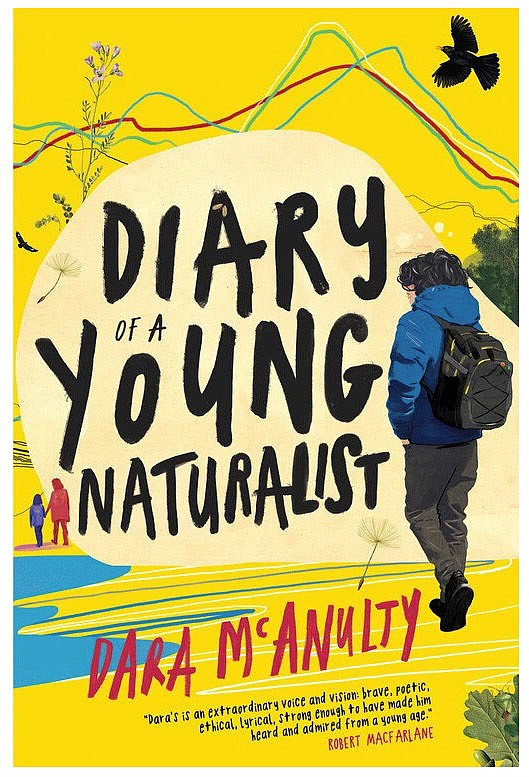 “Diary of a Young Naturalist”

Published in the U.S. June 11 by Milkweed