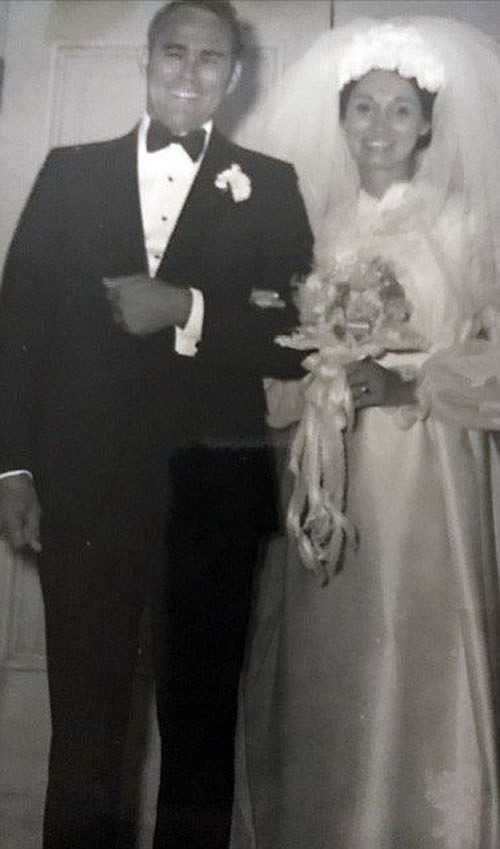 Anita Grace and Bill Donnell dated for a year, broke up for four, and then sent letters that crossed in the mail, ultimately bringing them back together for good.

They met when Anita visited First Baptist Church in Little Rock for an evening service with her roommate in the fall 1966. Bill and a friend came over to talk with them, and Anita recognized Bill as someone who had dated another of her roommates while they lived in the dorm at their nursing school.

Bill invited Anita to get coffee that night after church.

He was working for Jack Tyler Engineering then, and Anita had recently graduated from the Baptist Hospital School of Nursing. They started dating regularly, going together to a livestock show, movies, restaurants, sporting events and more.

"I think he just was afraid to get serious," says Anita, who was heartbroken when their relationship ended.

She left Little Rock, enrolling in the University of Mary Hardin-Baylor in Belton, Texas, to work toward a nursing degree, and he stayed behind in Little Rock and started a new job with Arkansas Power & Light.

Bill says he missed Anita, too, but they didn't stay in touch, both moving on with their separate lives.

Anita had returned to Arkansas and completed a nursing degree at the University of Arkansas for Medical Sciences in Little Rock, worked in a Baptist church camp in Benton and then went to Pine Mountain, Ga., to work for the International Mission Board, giving immunizations to missionaries preparing to leave for their assignments.

Four years had gone by when Anita and Bill each felt compelled to write a letter -- to each other, at the same time.

"I wrote her a letter and sent it to her parents' home in Russellville, and I asked her if she had ever thought about being a missionary," Bill says.

Anita's letter to him, he says, must have crossed the one she wrote him in transit.

Anita, who was as surprised to hear from Bill as he was to hear from her, had, in fact, considered being a missionary. She was preparing to enter a two-year journeyman program as a missionary nurse in Ghana and had written to ask if he would be a reference for her.

Anita says she had prayed for a Christian friend, and that's what they became as they wrote to each other while she was in Georgia.

"I had been around missionaries for a while, so Bill was my friend and we just started seeing each other as friends for a while," she says.

She returned home to Russellville to work in a hospital for a few months for more experience before her mission trip and to get her immunizations. They started dating again while she was at home.

Bill wanted to propose, but he was reluctant to do anything to get in the way of her work as a missionary.

"I didn't want to interfere with God's plan," he says. "He gave me a vision. I was praying about what to do."

Bill envisioned walking down a country lane, lined by trees on both sides, and he imagined seeing two trees with their limbs crossing the road to entwine.

"The Lord seemed to say, 'These two go together,'" he says.

Over dinner one night, he confessed that he didn't want her to go to Ghana.

At work the next day, Bill said to a co-worker, "I think I asked Anita to marry me last night," he says.

Anita says that the Bible verse Matthew 19:6 occurred to her.

"It says, 'They shall no longer be two but one flesh and what the Lord has put together let no man put asunder,'" she says. "I really had a peace about that, that we were supposed to get married."

Instead of Anita leaving for Ghana as scheduled that June, she stayed in Arkansas and planned a wedding.

She and Bill were married on July 17, 1971, two months after he thought he might have proposed, in First Baptist Church in Russellville.

They honeymooned in Destin, Fla., and then settled together in Little Rock, where Bill started a Nationwide Insurance Agency in 1982. He retired in 2011. Anita worked in Medicare medical review at Blue Cross Blue Shield for 20 years.

Bill was 32 when they married and Anita was 25, both older, by the standards of the day, than the average newlyweds. Before they fell in love, they had each decided that they would be fine remaining single.

This year, they celebrated their 50th anniversary by going back to Florida for a two-week vacation in Perdido Key with their three children -- Carla Elder of Prairie Grove, David Donnell of Little Rock and Hannah Martynov of Dublin, Calif. -- and their nine grandchildren.

Throughout most of their marriage, Anita and Bill have prayed together each morning.

"We asked the Lord just to bless us for that day," says Anita. "And I think he has."

She says: “I thought he was really cute.”

He says: “I thought she was really attractive.”

She says: “I had been in so many weddings as a bridesmaid because we were older when we got married, so just to think that I was actually getting married was amazing to me, as was the way the Lord brought us together.”

He says: “I think I was probably just glad to get the wedding and the wait over.”

She says: “We start each day praying together. If you have differences try to make them up quickly.”

He says: “Seek the Lord’s guidance and he will bless you with a godly spouse.”