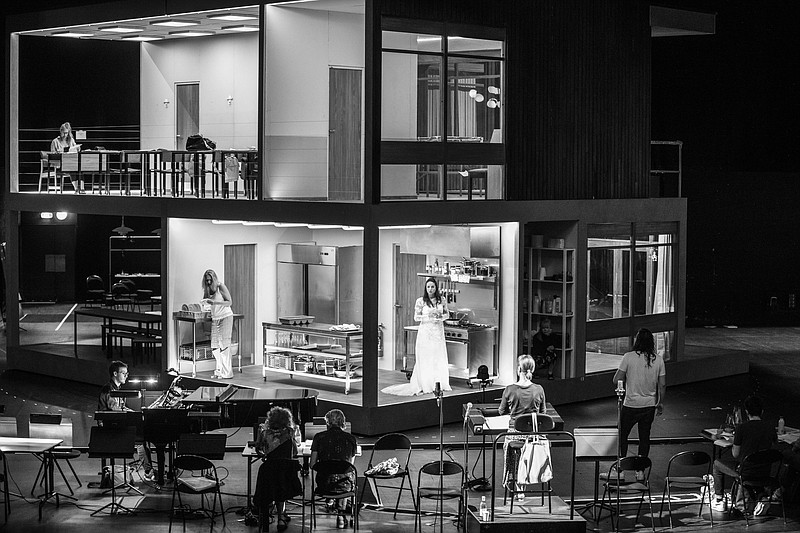 The opera “Innocence” is rehearsed recently at the Festival d’Aix en Provence in France. Kaija Saariaho’s labyrinthine work, premiering in France after a pandemic delay, is the most anticipated new opera of the year. (Jean-Louis Fernandez via The New York Times)

"Can you make the crescendo even bigger here?" she asked the London Symphony Orchestra as she conducted it in a rehearsal here. "Don't be afraid to go beyond the mezzo-piano on the page."

They played the passage again, and this time the music swelled to a shock, one of many in the most anticipated new opera of the year: Kaija Saariaho's "Innocence," which premiered Saturday at the Aix-en-Provence Festival. Commissioned by a host of major houses, it will travel in the coming years to the Finnish and Dutch national operas, the Royal Opera in London, San Francisco Opera and the Metropolitan Opera in New York.

Nearly a decade in the making, and nearly thwarted by the pandemic, "Innocence" is taut yet immense: a labyrinth of mystery and memory navigated at a breakneck pace, with the forces of a full orchestra, a chorus and a cast of 13.

Its plot, so contemporary that you could imagine reading about it in tomorrow's newspaper, recalls Saariaho's 2006 opera "Adriana Mater" — and it is light years from her most famous stage work, the ethereally seductive "L'Amour de Loin" (2000), set in medieval times. Like both of those, along with her comparatively intimate, Noh-inspired "Only the Sound Remains," from 2015, it has the makings of a singular contribution to the art form, on a scale rarely seen in new operas.

"I have a long career in commissioning," Aix-en-Provence Festival director Pierre Audi said. "And this is one of the five greatest pieces that I've ever been involved with."

It's difficult to summarize "Innocence," and its creative team has been intentionally secretive about the plot, which reveals itself like a fuzzy image that gradually comes into focus. The action alternates between a present-day wedding and a long-ago tragedy at an international school, with surprising connections between the two becoming an exploration of trauma and its permeating effects.

The core of the opera is its multilingual libretto, by Finnish writer Sofi Oksanen with translations by Aleksi Barriere, Saariaho's son and occasional collaborator. The text's use of different languages — including German, French, English, Greek, Finnish, Spanish and Czech — prompted Saariaho to employ similarly varied vocal techniques, such as folk, Sprechstimme and lyrical, rhythmic speech. (The cast includes a mix of singers and actors.)

Some of the languages were new to Saariaho, and required time to learn the contours of their words and the cadences of their sentences. One role was written specifically with Czech mezzo-soprano Magdalena Kozena in mind, for example; before setting to work, Saariaho met with Kozena in Paris to record her speaking.

"Analyzing the languages I don't speak was fascinating, but that's why it took so long to compose this piece," Saariaho, who spent several years developing "Innocence" and the better part of four years writing it, said before a rehearsal.

During that time, a team came together. Saariaho asked Malkki — one of the world's leading interpreters of her music, and the dedicatee of this year's orchestral work "Vista" — to be the conductor.

"It was very important for her to know early on who would be doing it," said Malkki, who led "L'Amour de Loin" at the Met when it arrived there and conducted the premiere of the 2006 oratorio "La Passion de Simone." "Which of course I felt was an incredible gesture of trust."

More recently, Saariaho was introduced through Audi to director Simon Stone, and felt that his temperament was "very well suited" to the opera. In a promotional interview for the festival, Stone spoke about the work's "beautiful exploration of the scars that we carry with us and the need to reopen wounds so we can heal them properly."

"It's got," he added, "a kind of Chekhovian empathy for its characters."

The premiere was planned for last year but was canceled during the pandemic's spring surge. By summer, however, the virus' spread had ebbed enough for the creative team and cast — though not the chorus or orchestra — to rehearse the opera in something of a bubble residency. The work was more or less staged, and the music was prepared as much as it could be with only a piano.

"In some ways, we were all disappointed," Kozena said. "But any time you rehearse something, then leave it and come back, it grows and you digest it better. It was a complete luxury for us to rehearse in peace and really just explore it."

Audi referred to that period as "a stroke of luck." Some premieres originally planned for the past year have been stranded, but "Innocence" was in a position to return as soon as possible. The previous work on it even allowed Stone to be double booked for the 2021 festival, directing "Innocence" and Wagner's "Tristan und Isolde," with relatively little friction. Crucially, Audi said, Saariaho's opera will now be able to travel without further delay.

On a recent evening, Stone was able to attend only the first half of a rehearsal for "Innocence," stopping by Kozena's dressing room on the way out for a quick note but otherwise looking visibly pleased and saying, "It really is a good show."

"We couldn't see him very much this year," Kozena said after he left. But the most pressing work, she added, was musical anyway. She had originally learned the opera with a piano reduction, which inevitably lacked the layered textures of Saariaho's score.

A single note can be hard to find in Saariaho's dense score — a sound world haunted by a ghostly chorus and spectral flourishes that vanish as suddenly as they arrive. Like many of her works, the music is never truly at rest and keeps organically changing shape, with subtly specific characterizations for each role and a fluidity that matches the libretto's interwoven timelines and perspectives.

"I don't know why or how, but I kept coming back in my mind to 'The Last Supper' of Leonardo da Vinci," Saariaho said. "I was thinking about how all of these 13 people have their own story and their own motivations, and how we all experience every moment differently. We all pay attention to different things. This became a kind of idee fixecq EG for me."

The characters have their own musical signifiers — which means, Malkki said, that "in the beginning, there's a lot to take in, but then that is the element which makes it very understandable."

Despite the score's overall density, Kozena has found the vocal writing comfortable. Saariaho, she said, "really understands voices": "She lets you express yourself, with colors and melody that gives you space to really concentrate on the music and let it be in your body. Only then can you give emotions that are really deep."

With the orchestra finally in the pit, Malkki said, she has continued to make new discoveries. And the more time she spends with "Innocence," the more she is convinced that it represents the future of opera.

"It's not escapism," she said. "It's a work that actually helps us better understand the world that we live in. These are huge themes, bringing all these different destinies together and showing how we have to live together in reconciliation. And that coexistence is there in the music."