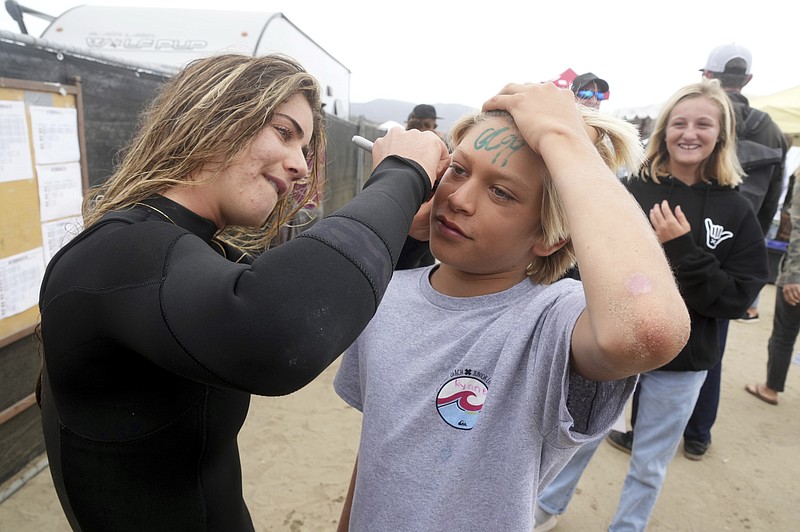 FILE - Teenager Caroline Marks of team USA signs the cheek of eleven year-old Ryan Bukowiecki of Newport Beach during an Olympic exhibition at the USA Surfing Junior championships in San Clemente, Calif., in this Tuesday, June 22, 2021, file photo. Marks will be one of the medal contenders when surfing makes its Olympics debut at the Tokyo Games. (Keith Birmingham/The Orange County Register via AP, File)

Before Caroline Marks ever won her first surfing contest and long before ever earning a spot at the Tokyo Games as her sport makes its Olympic debut, there was simply this: Trying to impress her big brothers.

That's what lured her to the waves.

Growing up, the backyard at the Marks house in Melbourne Beach, Fla., was like a carnival of fun -- trampoline, self-built motocross track, basketball court and room for skateboarding. But right across the street was an even bigger attraction -- the ocean, where the crashing surf always beckoned her brothers.

There she was, more of a horseback rider then, trying to join in on the wave-riding fun. She quickly rose from tag-along to " Grom " -- that young kid who surfs better than you -- to World Surf League standout to her current role of contender when surfing hands out its first Olympic medal.

"My brothers play a huge influence in how good I am today," said the 19-year-old Marks, who has two older brothers, two younger brothers and a younger sister. "I kind of owe them everything. I just really wanted to impress them and have them think I was really cool."

FYI: They never thought she was a nuisance.

"Caroline was always cool to us," big brother Luke wrote in an email. "She was 'one of the boys' from the beginning. We loved surfing with her."

She remembers riding waves as young as 3 (with pictures to prove it). But in reality, she had visions of making waves in another sport -- rodeo. Her specialty was barrel racing, where the horse and rider run a pattern around barrels in the fastest time. Still, the ocean always enticed her even as she was on her horse.

"I've talked to my mom about this all the time and she's like, 'I'm surprised you didn't start surfing even sooner,' " Marks recounted. "Because I'd always bring my horse in the water."

As the family legend goes -- chronicled by big brother Luke in a recently released Red Bull movie titled "That's Caroline" -- one summer there were storms blowing in big waves and Marks constantly followed her siblings to the beach.

The rise was no surprise to Luke, who narrated the film about his sister.

"She has that gift to where she could start a new sport tomorrow and succeed," Luke wrote.

Her path was downright gnarly:

At 11, she was winning the under-12 Surfing America Prime -- the top U.S. amateur title.

At 13, she turned pro (traveling with one of her parents).

At 15, she became the youngest surfer to qualify for the World Surf League Championship Tour, competing against surfers she had posters of on her wall.

"I was star-struck by all of them and being so close up," said Marks, a Red Bull-sponsored athlete who recently partnered with the American Optometric Association (AOA) to promote eye care through its "Eye Deserve More" campaign. "That's the cool thing about what I do -- I get to surf with all my heroes and compete against them and try to beat them and it's super fun."

Then there's this thought: Potentially winning the first Olympic medal in her sport. The competition will be held at Tsurigasaki Beach -- about 40 minutes outside Tokyo -- with the competition window from July 25 to Aug. 1.

"To have a chance to make history like that and represent my country? Yeah, all that's so insanely exciting," said Marks, whose family moved to San Clemente, Calif., in part to help boost her surfing career. "It's crazy that those words are even coming out of my mouth."

The ocean has long been her sanctuary, her getaway. So much so that whenever she's in a rut, her mom tells her to jump in the water.

"She's always like, 'You need a spray of saltwater,' " Marks said. "(The ocean) instantly makes me feel better and it just makes me happy. It's what I wake up in the morning thinking about and what I think about when I go to bed. It's my happy place for sure."