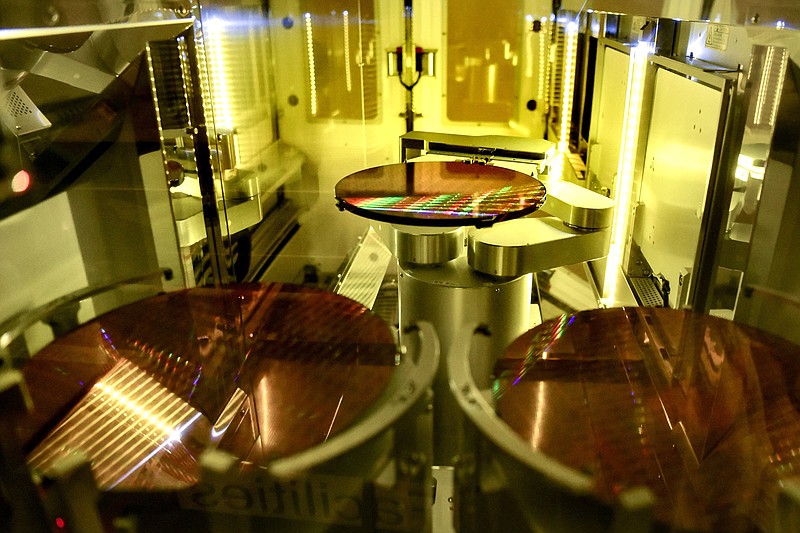 Semiconductor chips are manufactured in the clean room at the GlobalFoundries plant. (The Washington Post/Cindy Schultz)

MALTA, N.Y. - Christopher Belfi was waiting tables in a lakeside resort near this upstate New York town a decade ago when he got the career break he'd been waiting for -- an invitation to work at a semiconductor factory.

Belfi, who'd recently graduated from the State University of New York at Albany with a technology degree, started chatting with two customers who turned out to be managers at the nearby semiconductor factory. "I used to coach robotics teams in college. And so we were just talking about that. They left their business cards in my checkbook, and I applied and never turned back," Belfi said.

He started out as a technician, repairing the automated equipment that carries silicon wafers from machine to machine. In time, he rose to oversee the automated system that propels thousands of pods along tracks on the ceiling, each carrying 25 shiny discs that will someday power a mobile phone, an airplane or an automotive air bag.

Lately there are more pods than ever crowding those tracks, as the GlobalFoundries plant -- one of a handful of similar factories in the United States -- races to keep up with soaring demand for computer chips.

The tiny components are the brains behind an ever-growing array of electronics, from toothbrushes and refrigerators to vacuum cleaners and cars. Global chip sales are forecast to grow by 20% this year and by 9% next year as smartphones and laptops use more of the components. Even the most mundane products -- tires, doorbells and light bulbs -- now require chips to make them work.

Yet the huge expense of building a semiconductor factory -- and the monthslong process needed to make a chip -- means global demand is far outstripping supply. That has forced automakers and other chip users to idle production and prompted lawmakers to endorse federal subsidies to try to boost U.S. chip manufacturing.

There are hundreds of companies that design computer chips but fewer than two dozen globally that manufacture them in large quantities, leaving those factories under huge pressure.

Many of the biggest facilities are in Taiwan, which now produces 20% of the world's semiconductors and over 90% of the highest-tech chips, according to a report commissioned by the Semiconductor Industry Association, which calls itself the "voice of semiconductor industry."

Asia as a whole produces about three-quarters of global semiconductors, while the United States manufactures about 13 percent. To boost U.S. production, the Senate authorized $52 billion in subsidies last month for new factories and chip research. The measure, supported by President Joe Biden, still must clear the House, where it has yet to be added to pending legislation.

GlobalFoundries, which is wholly owned by the government of Abu Dhabi and has its headquarters in Malta, 30 minutes north of Albany, is one of the main sources of U.S. production. The Malta plant runs 24 hours a day, pumping out 500,000 intricate silicon wafers a year that are then cut into individual chips.

Hundreds of employees don elaborate protective gear known as bunny suits at the start of each shift, to prevent stray lint or hair from marring the wafers. Even a speck of dust can ruin the painstaking process for producing the chips.

Before giving The Washington Post a tour on a recent morning, Belfi suited up: two layers of booties, two pairs of gloves, a hairnet, a hood and a jumpsuit. Protective goggles and masks are also standard, so adapting to covid-19 protocols "really wasn't any different," Belfi said.

He manages 95 people and has learned to identify them in their suits. "You recognize people by the stride they walk at," he said.

The factory is filled with the static hum of $10 billion worth of machinery and the warm glow of yellow light, which protects the light-sensitive wafers from damage.

The 12-inch silicon discs look like shiny, smooth mirrors when they arrive at the factory. Three months later they are covered with intricate etchings forming billions of transistors, the microscopic switches that control electric currents and allow the chip to perform tasks.

There are about 700 processing steps along the way, through which dozens of layers of patterns are printed and etched on top of one another, following designs provided by each chip customer.

"Think about making a cake," Belfi said over the noise of the machinery. "In this case it's going to be a 60- to 75-layer cake, and that cake is built over approximately 2½, three months."

To create each layer, the wafer is coated with a light-sensitive chemical. Then a high-tech printer known as a lithography machine projects the same tiny pattern over and over across the wafer, as if it were stamping the same pattern on every square of a checkerboard, with each square representing a future chip.

Afterward, an etching machine engraves those patterns into the wafer, and more chemicals are deposited and baked onto the surface. This process repeats over and over as different patterns are laid on top of each other to create dozens of layers of transistors. Then the layers are connected to one another by copper wires to allow signals and power to travel throughout the chip.

The pods carrying the wafers rarely rest through this three-month process, traveling from machine to machine according to a preprogrammed route.

Belfi and the other engineers are there to ensure the machines don't break down, a task that has grown more urgent as demand soars. Machinery in a typical chip factory, known as a fab, runs about 90% of the time, with 10% downtime for scheduled or urgent maintenance.

The most crucial -- and expensive -- pieces of equipment in the factory are the lithography machines that print the intricate designs on the wafers. The Malta plant has 20 of those; each cost roughly $100 million.

"When that machine breaks, it's important you fix it pretty quickly," said Peter Benyon, the factory's general manager, who previously ran a GlobalFoundries plant in Singapore.

Last summer, as chip demand was soaring, one of the Malta factory's lithography machines malfunctioned. Normally the equipment's manufacturer, the Dutch company ASML, would dispatch an engineer to help fix it, but because of the coronavirus crisis, that wasn't possible. So instead, a factory technician wearing an augmented reality headset connected with ASML engineers in the Netherlands so they could view the inside of the machine and oversee the repairs, Benyon said.

Getting machinery back online quickly can help a factory squeeze out more chips. So can cutting down on the number of faulty chips per wafer, Benyon said.

But dramatically boosting output means building new factories. By next year, chipmakers will have started construction on 29 new fabs worldwide, according to SEMI, an industry association.

China and Taiwan will build more than half of these -- eight each -- followed by six in the United States, three in Europe and the Middle East and two each in Japan and South Korea.

The United States manufactured more than a third of the world's chips in the early 1990s, but production shifted to Asia as chip companies sought cheaper labor, and as Taiwan, South Korea and China began heavily subsidizing chip manufacturing.

Investors also pressured U.S. chip companies to focus on semiconductor design and to outsource manufacturing to Asia because of the huge cost required to maintain chip factories, according to Glenn O'Donnell, a tech analyst at market-research firm Forrester.

"It's the byproduct of the short-term Wall Street mentality everyone has to buy into because you have to satisfy Wall Street," he said.

Worried that the pendulum has swung too far, U.S. officials and lawmakers are now eager to rebuild domestic chip production with the help of federal subsidies. As chips become more central to weapons systems and to the economy overall, relying too much on Asia undermines national security, they argue.

"Having America have a robust supply of semiconductors is important to our national defense and our economic security," then-Senate Minority Leader Charles Schumer, D-N.Y., said during a visit to the New York factory last year, as he was promoting the federal funding bill.

GlobalFoundries is planning to expand the Malta factory's output by at least a quarter if it receives some of the federal subsidy endorsed by the Senate, chief executive Tom Caulfield said in a February interview. Some of the company's customers also are ready to invest to expand production to secure steady supplies, Caulfield said.

The goal is to double production capacity in Malta in the coming years with funding from the company, its customers and the federal government, spokesman Michael Mullaney said.

GlobalFoundries is using a similar combination of investment to boost output at its factories overseas; its planned $4 billion expansion of its chip plant in Singapore includes funding from Singapore's government.

California's Intel, meanwhile, has pledged to spend $20 billion to build two factories in Arizona. Intel CEO Pat Gelsinger has said the United States should aim to boost its share of global chip production back above 30%.

For now, U.S. manufacturers will have a hard time matching the low cost and sophistication of their Asian rivals, according to Steven Vogel, chairman of the political economy program at the University of California at Berkeley, who has studied the chip industry.

"Taiwan and the Koreans are the best in the world when it comes to price and quality," he said. The U.S. should take steps to rebuild its semiconductor manufacturing, but "there are huge efficiency benefits to the global supply chain," he said.

The most advanced manufacturers -- Taiwan's TSMC and South Korea's Samsung -- both have announced plans to build factories in the United States and are expected to be eligible for the federal subsidies should they become law.

Chip companies have emphasized the need for better science and technology education and worker training to prepare the semiconductor manufacturing workforce.

"For us, one of the hardships is actually getting great folks because a lot of what you're seeing here, there aren't a lot of colleges that offer curriculum surrounding semiconductor manufacturing," Belfi said.

There are several former auto mechanics on Belfi's team, and some former Air Force mechanics who used to repair planes. "A lot of their outside passions are right up the block at Saratoga Speedway," he said, referring to a nearby stock-car racetrack. "We look for technical skills, mechanical backgrounds."

Other groups at the factory look for employees with degrees in materials science, chemistry or engineering, he said. GlobalFoundries offers apprenticeships that provide two years of on-the-job training to employees without a degree, and works with community colleges to help design chip-related curriculums.

Belfi himself studied mostly software and computer science in college but preferred building things, which he did for fun while coaching schoolkids competing on robotics teams.

"I was much more equipment-driven and liked to work with my hands," he said. 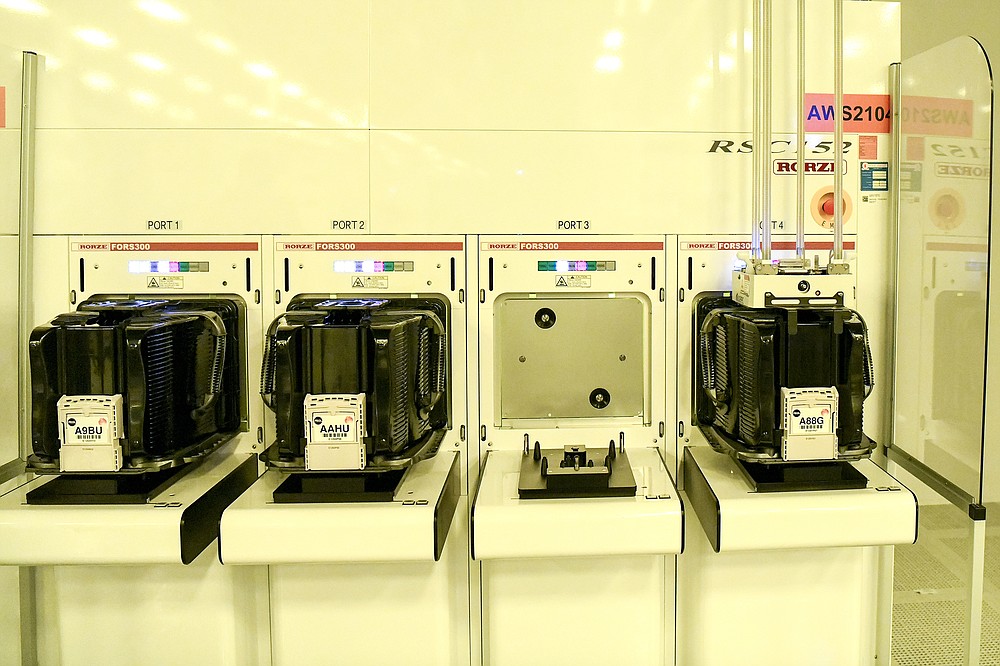 Containers holding printed silicone wafers are parked in ports until they are transported to another area in the clean room at GlobalFoundries Fab 8. MUST CREDIT: Photo for The Washington Post by Cindy Schultz 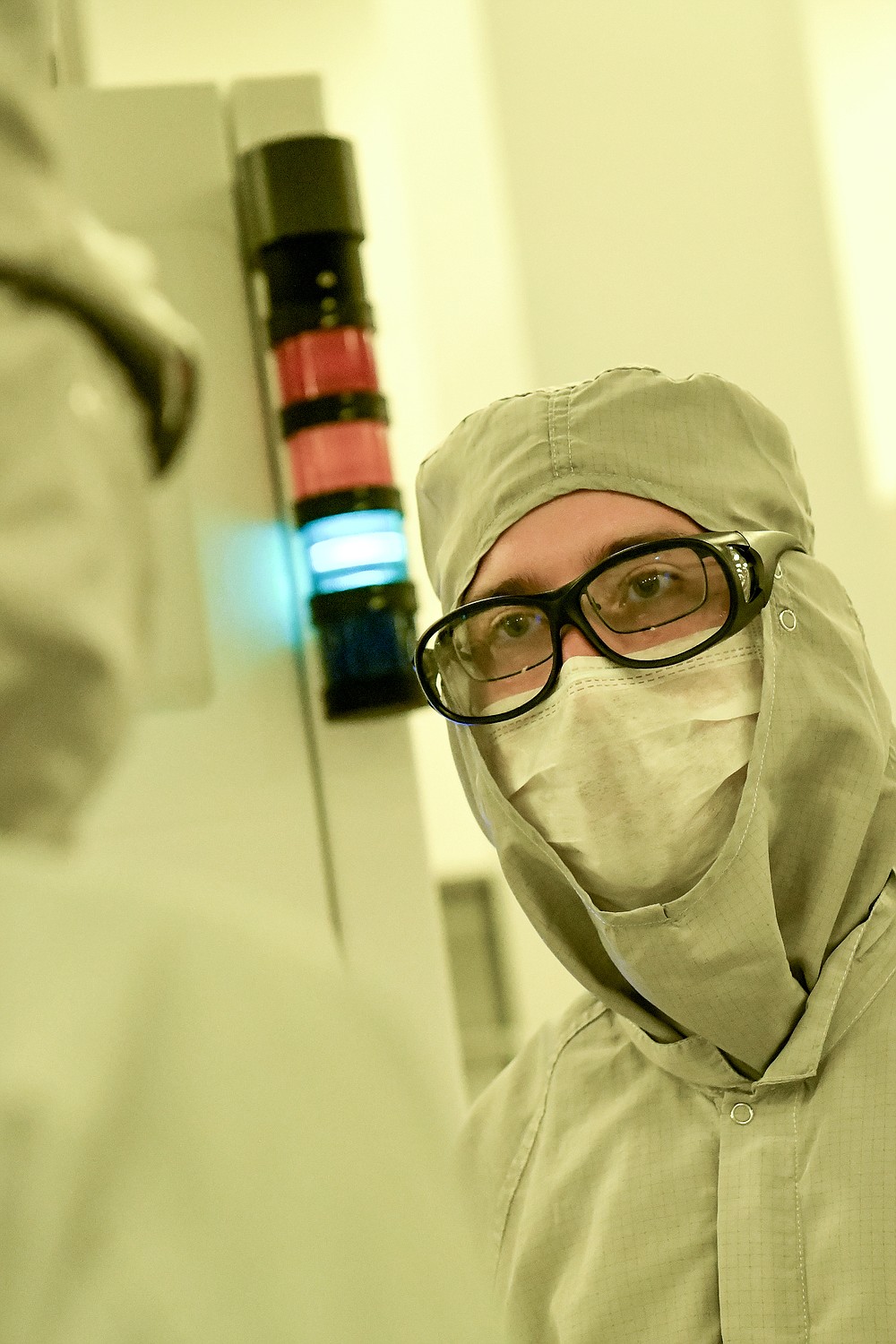 Chris Belfi, senior section manager, in the clean room at GlobalFoundries Fab 8. MUST CREDIT: Photo for The Washington Post by Cindy Schultz 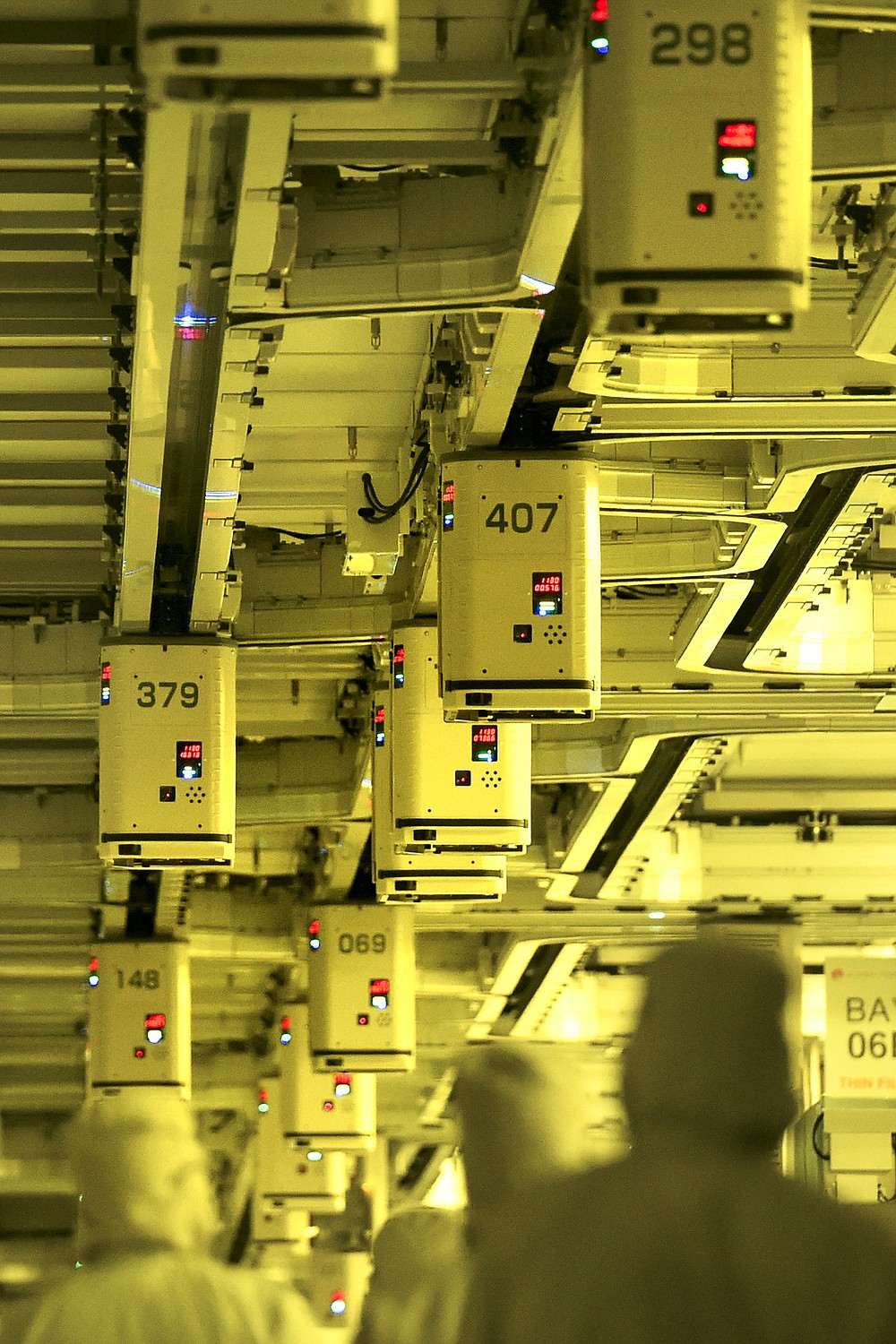 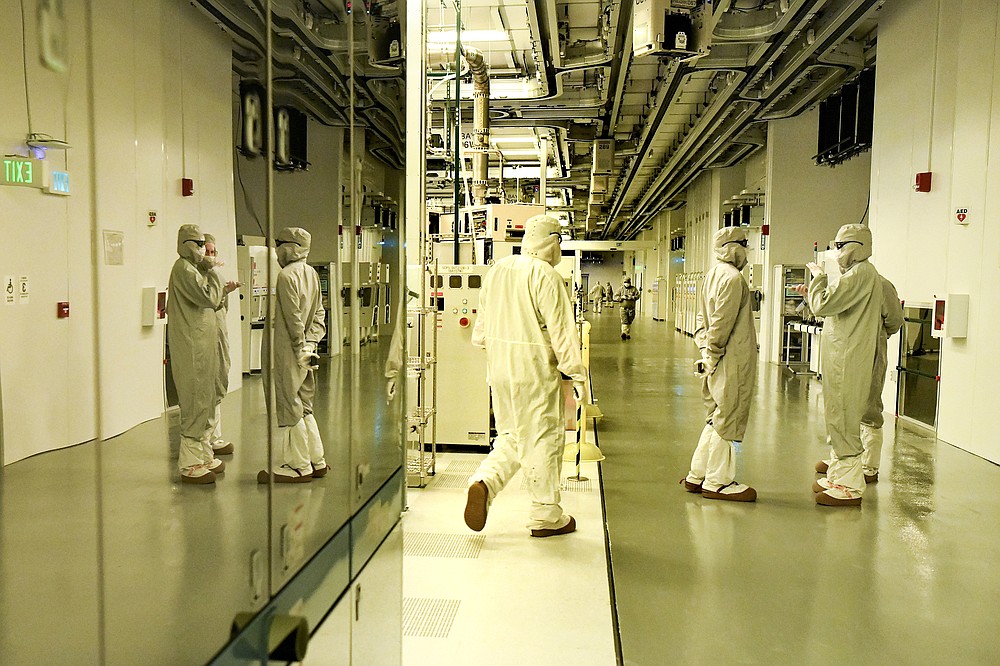 Semiconductor chips are manufactured in the clean room at GlobalFoundries Fab 8 in Malta, N.Y. MUST CREDIT: Photo for The Washington Post by Cindy Schultz