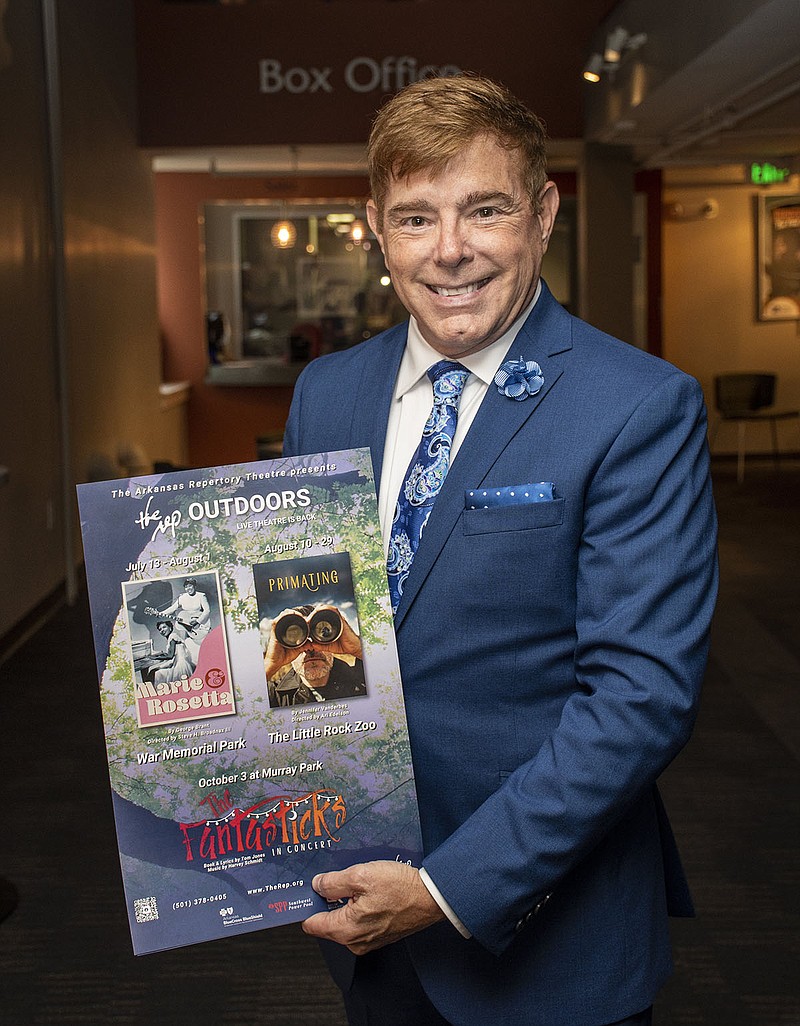 For his day job, Danny Wood is the claims manager for Windstream Communications.

"My 'side gig' is volunteering for many organizations, and I am passionate about both," Wood says.

Through this position, Wood says, he'll be an influence "but won't be voting" on board decisions.

The goal, he explains, is "to provide a more diverse perspective" and "add other voices to the table" to help the board make decisions regarding the theater's course.

Rep spokeswoman Jennifer Owens Buie explains that the new advisory board consists of eight members, five of which will be "community partners" -- including from the spheres of government, education and other artistic institutions; the other three will represent internal aspects of how the theater operates.

Wood will serve as an "ambassador" to the board for ushers and other volunteers that keep the front of the house going and a young patrons group known as StageDoor Social, billed as "the next generation of Rep supporters."

The advisory board meets monthly and just had its introductory meeting, "which I was late for," Wood says ruefully.

The Rep is starting a lengthy comeback from the covid-19 pandemic -- which sort of knocked back its progress as it was making a comeback from a financial crisis -- with a pair of outdoor summer productions, the first of which, "Marie & Rosetta" by George Brant opens this week in Little Rock's War Memorial Park. The second, "Primating," a romantic comedy by Jennifer Vanderbes set in an African safari camp, will have its world premiere in August at the Little Rock Zoo.

Wood will be present: "I'll be a greeter at the first shows at War Memorial Park and at the zoo" -- where, by the way, he also volunteers. He's also on the board of the Weekend Theater and pitches in for the Acansa Arts Festival, Wildwood Park for the Performing Arts, the Arkansas Symphony, the Arkansas Symphony Designer House and Ballet Arkansas.

In that latter capacity, Wood has shown up on stage for several years -- and will again this December -- in the role of the comic, gray-wigged butler in the first-act Christmas party scene for the local company's production of Peter Tchaikovsky's ballet "The Nutcracker." He says he'd be willing to consider doing a role at the Rep if the opportunity arose, but "it'd have to be a small role -- with no lines."

Wood got his start as a performer at age 6, when his teacher selected him to play the Easter bunny in a show. He subsequently studied tap dancing, played in a jazz band and, while a student at the University of Arkansas, Fayetteville served as a stagehand.

His mother, Peggy Holland Wood, had been a longtime volunteer at the Rep since before it moved, in the late '80s, from a former church just on the east side of MacArthur Park to its current location at Sixth and Main streets. Wood says his mother and a group of friends would go out to dinner before each show, volunteer during the show and afterward "spend time talking about the parts of the show they enjoyed the most."

As his mother's circle of friends/pool of volunteers started to shrink, Wood says, "I was invited to join." The Woods et al. were part of the concessions crew, and "since I was physically able to work a corkscrew and knew how to use it, I was the designated bottle opener and wine pourer." Even now, though he's not always able to identify those theater patrons by name, "I still refer to some of my friends as, 'Hello Mrs. Merlot!' or 'Mr. Riesling!' or 'Ms. Diet Coke no ice!' "

Wood's daughter, now Jourdan Wood Williams, also volunteered at the Rep while she was in high school, and "there were many performances at which there were three generations serving on the same night." Wood and his daughter, with whom he danced in "The Nutcracker" when she was a child, were co-chairs for the theater's 2009 "Startin' Early and Staying Late" parties for the annual Saints and Sinners fundraiser.

Williams now has three children, and "while my mother is no longer able to volunteer" -- she's in her 90s and has mobility issues, Wood explains -- "I hope one day my three grandchildren will carry on the family tradition and the legacy will carry on.

"The Rep brings us together as a community. Not everyone can write big donor checks, but we can all give of ourselves through volunteering."

Wood believes firmly in continuing a practice -- instituted by former board chairwoman Ruth Shepherd -- of board members and volunteers greeting patrons at the theater door.

"Smile, and make them feel welcome before they even enter the theater," he says.