Decatur to use bleachers from Farmington 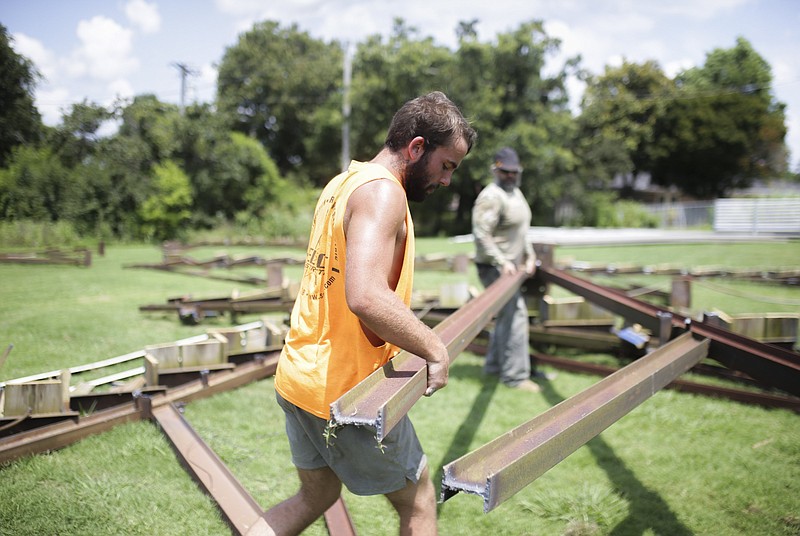 DECATUR — Two school districts in Northwest Arkansas came together for a common good that benefited both.

Farmington no longer had use for the bleachers and press box at Allen Holland Field after the Cardinals moved into a new football stadium in 2019. Decatur needed an upgrade at its stadium, particularly with bleachers. Workers on site said Friday the seating at Bulldog Stadium had been purchased from a dirt race track years ago.

“The bleachers were too steep and they had become a safety hazard,” Decatur superintendent Steve Watkins said.

A resolution for both schools began to unfold when Watkins mentioned his concerns to former Farmington superintendent Bryan Law when the two were in a meeting together about a year ago. Law raised the possibility of donating the bleachers to Decatur and Jon Laffoon, who became superintendent at Farmington following Law’s retirement, secured the deal with approval from the school board at Farmington.

“When I came to the district, the (Farmington) board and administration wanted to remove the bleachers (at the old field) for safety reasons,” Laffoon said. “We had excess property with no inherent value. Our superintendents in Northwest Arkansas always try to help each other for the kids and we were able to save the extensive costs of removal by donating them to another district. It was a win-win for Farmington and Decatur.”

Decatur is paying the nearly $100,000 cost to dismantle, transport, and erect the bleachers and press box from Allen Holland Field to Bulldog Stadium in Decatur. The parts were loaded onto flatbed trailers last week in Farmington and driven to Decatur, where workers from Ruiz Construction will begin to reassemble the aluminum bleachers on the home side at Bulldog Stadium.

“The costs for purchasing new bleachers is prohibitive, especially for a small school district like ours,” Watkins said. “So, we really appreciate Bryan Law, Jon Laffoon, and the school board at Farmington for their efforts in making this come together. We’ll be able to seat about 500 on the home side once these bleachers are in place.”

While the bleachers and press box at Allen Holland Field has been removed, Farmington will still use the playing field for practices by its middle school athletes.

A crew at Decatur last week loaded frames from the old bleachers onto a flatbed trailer to be hauled off and used for scrap metal. The door to the press box will need to be repainted from Farmington Cardinals red to Decatur Bulldog blue or gold, the school’s colors.

The aluminum bleachers and press box are expected to be in place in advance of the upcoming season for Decatur, which plays eight-man football. The upgrade for Bulldog Stadium is good news to Jake Denzer, who was named head coach of the Bulldogs in June.

“There’s nothing like re-energizing a football program more than a makeover,” said Denzer, who spent the past eight years as an assistant at Elkins. “It’s exciting.”

Denzer will make his coaching debut for Decatur at home on Aug. 30 against Watts, Okla.