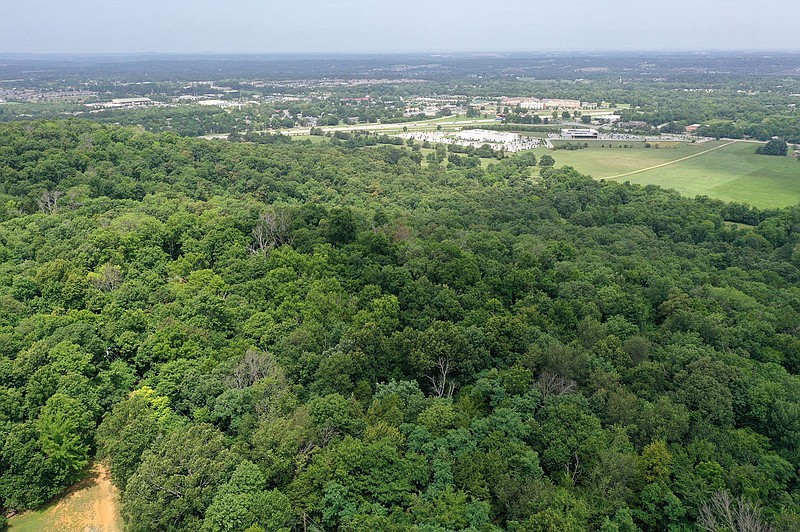 A view of Markham Hill is seen looking north with Interstate 49 and the Cross Church Fayetteville Campus in the distance. The Fayetteville Planning Commission considered a trio of rezoning requests Monday for land south of the hill. (File photo/NWA Democrat-Gazette/Spencer Tirey)

FAYETTEVILLE -- The Planning Commission voted Monday to keep three pieces of Markham Hill as they are.

Three rezoning requests for the west and southern portions of the hill went before the commission. The hill, featuring hundreds of mostly wooded acres west of the University of Arkansas campus, has been the subject of a number of development requests in recent years.

Monday's requests included three tracts of land totaling about 20 acres owned by the same entity, the Barnes family trust. The northernmost parcel, nearly 10 acres, abuts Futrall Drive, east of Interstate 49. The central parcel, fewer than 2 acres, also abuts Futrall Drive but is separated from the first piece by about 7 acres owned by a different property owner. The southernmost piece, about 9 acres, abuts a row of residential uses at Stone Street and Futrall Drive.

All three pieces would be rezoned from residential single family up to four units an acre to an urban thoroughfare district. The applicant, Jorgensen & Associates, has not submitted any development plans to the city associated with the request.

Tom Terminella spoke to the commission Monday representing the Barnes family trust. He said the southern portion was intended for modern storage facilities. The two pieces east of I-49 would be for dense multifamily units with structured parking, he said.

"I have no idea when and who and how these parcels ever got zoned a single-family designation, but certainly when you're on a six-lane corridor interstate, very few single-family homeowners would sign up for that," Terminella said.

The urban thoroughfare district is among the city's most intense zoning types. It allows a wide variety of commercial and residential uses. Buildings can be five to seven stories tall. There is no limit on density of structures.

Commissioner Sarah Sparkman said although she had no doubt the requests were meant for their stated uses, the commission had to consider all of the uses allowed under the zoning type. She expressed concern particularly over the potential for automotive sales and gas stations or drive-throughs.

"We have to look at the worst-case scenario of what could go in here, and what's compatible and not compatible," Sparkman said.

A number of commissioners said they would have felt comfortable with another zoning district, community services, that includes fewer allowable uses with a maximum 5-story building height. Terminella said community services would not allow the uses intended for the land.

No one from the public spoke at the meeting, which was held in person and online on Zoom. However, city planning staff received written statements of opposition from residents.

The pieces lie south of a planned development from Specialized Real Estate Group for more than 140 acres, including the Pratt Place Inn.

About 50 acres owned by Specialized along the east side of I-49 will be kept as a natural area. Construction is planned within about 72 acres, with about 20 acres planned as green space. About 500 homes could be built over the course of several years.

The city also owns about 62 acres on Markham Hill east of I-49 for use as a natural area.

The City Council earlier this year rezoned more than 100 acres north of the hill, southeast of I-49 and Wedington Drive, to a mostly urban thoroughfare zone with a mix of community services. The land is the site of the old Marinoni family farm.

As a separate item, the commission voted 7-0 to accept $20,691 as a fee instead of land for use as a park at Markham Road and Cross Avenue. The city's parks department and developer Specialized Real Estate Group intend to identify a location for a soft-surface trail in the area.

• A variance to the city’s building design standards to allow an art-themed outdoor basketball court to set up at the former Dickson Theater building.

• The development plan for Walk-Ons Bistreaux, coming northwest of Wedington Drive and Interstate 49.

• Rezoning just more than half an acre on Crossover Road south of Stone Mountain Drive from residential single family up to 4 units an acre to a residential zone allowing up to 12 units an acre.